Having received an early build of Cobra Mobile's iBomber Defense a while back, I was waiting patiently for the finished game to appear on the App Store.

Being easily lead though, after a while I forgot about it and moved onto other games. Now, at least, we know why it was delayed.

Instead of being released by Cobra, it's been published by the EA-owned Chillingo, who, no doubt, will be making a big splash about it.

And with good reason too, as it's a nicely put together tower defence game set in the successful iBomber world.

You start off on the Allied side in WWII, fighting your way through 22 land and sea European campaigns. The enemy attack in between 30 to 50 waves per level along preset routes, with you placing your weapons to stop them getting 15 units or more into your base.

The type of weapons are limited to machine guns, cannons and anti-aircraft guns. (Some levels feature waves of aircraft.) Each weapon can be upgraded two times if you have the cash.

Making the game more tactical however are the sabotage and radar units, which slow down the enemy and improve the range of your guns respectively.

Another nice addition are the counter attack missions, in which a previous level - complete with your unit settings - is bombed out and you have to pick up the pieces from the ruins. You can also rewind a wave if you want to change your tactics, as well as speeding them up if you're bored.

Once you've completed the missions - there are three difficulty levels - they are reversed with you getting the option to play them from the Axis view point, although this is effectively just a cosmetic change.

The game is also wrapped up with Cobra's typical high quality presentation in terms of graphics, audio and user interface, and supports Game Center and Chillingo's own Crystal social network.

You can see how it plays below. 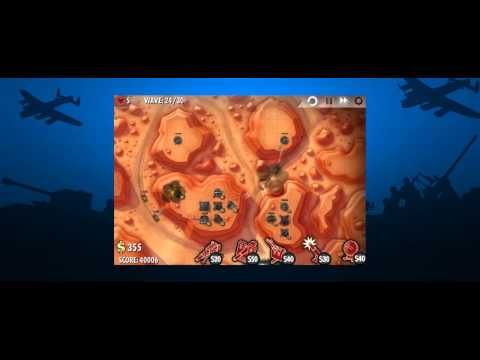