Oh, tower defence. Will you ever leave us alone?

Barely a week passes in the wild world of iOS without a new game begging us to dot its maps with machine guns and watch its little enemies get slaughtered as they march their predetermined march from A-to-B.

iBomber Defense Pacific is no different. In fact, it's one of the most by-the-numbers tower defence games we've played in a while, which makes it both slightly tiresome and curiously appealing in its simplicity.

The action takes place during WWII in the Pacific theatre. You know the rest - soldiers and vehicles scoot through a map and you have to make good use of time and positioning to set up your various machine guns and cannons in order to stop them.

iBomber Defense Pacific is more rigid than most, though, because you're only allowed to drop armaments into the allotted squares etched onto the map, meaning fewer tactical possibilities and far less faffing.

Perhaps the only real innovation in iBomber Defense Pacific is given away in the title - you can lob bombs on the enemy to mix things up.

Provided you've stuck a bomb unit on the grid, you're given regular explosives to drop. It adds a bit of real-time skill to the action and neatly avoids the whole 'not actually doing anything' problem associated with tower defence. It's fun, too, lining up the little idiots then dropping hellfire on them from above.

You can also use the bombs to smash crates. Yes, that's not a hugely enticing prospect, but these aren't your ordinary crates. They're more like obstacles, taking up valuable space on the grid and taunting you with their wooden oblong smugness.

Much of the tension comes from choosing whether to annihilate a crate to free up more room for killing or to devote that time to the killing itself. It sounds like it shouldn't work, but - like everything in iBomber Defense Pacific - it's neatly done. Unremarkable, but neat.

All The Small Things

Despite being so similar to countless other games, there's still something satisfying about watching those little soldiers perish under your mighty and craftily-placed guns. The animation is slick, the explosions are meaty, and the sound is suitably crunchy.

iBomber Defense Pacific is both solid and forgettable. You won't want to put it down while you're playing it, but nor will you particularly want to pick it up again afterwards. If you're after a quick fix of tower defence gaming then this won't disappoint. 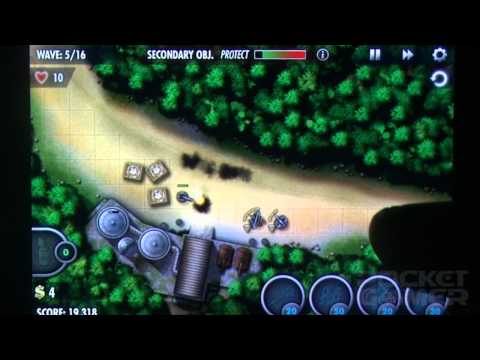 A strong tower defence game that does very little new, but doesn't put a foot wrong, either
Next Up :
Catalyst Black review - "Gorgeous visuals, smooth gameplay and fun-filled fights"

iBomber moves to the Pacific