Milky Tea Studios has frequently updated its futuristic combat arena game, HyperBrawl Tournament since it first launched for Apple Arcade. The most recent change allowed players to create private matches so they could battle against their friends.

But the developers aren't content to stop there. As part of LaunchPad #4, they've also teased another update that will be heading to the game later this year. This will introduce a new hero to HyperBrawl Tournament alongside a bunch of cosmetic items that will allow players to create a team with their own personal flair.

Discussing the update, Jonathan Holmes, Studio Director said: “We are absolutely thrilled that the latest update to HyperBrawl Tournament has been a huge success, but our work doesn't stop here, and the team are already working on their next update to the unique Apple Arcade version of the game, introducing new content and a host of mobile-focused gameplay improvements.” 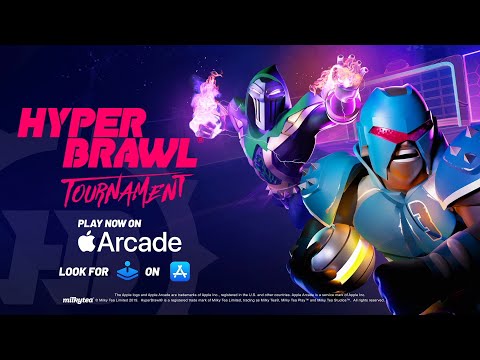 He added: "We can reveal that we will be delivering a brand new update on Apple Arcade later this year, which will welcome an aquatic-themed hero into the high octane universe of HyperBrawl Tournament, as well as cool new hero cosmetics, allowing players to build personalised teams and showcase them in their arena of choice online.

If you are a fan of HyperBrawl Tournament or are interested to learn more about Apple Arcade in general, stay tuned to the site as we will be posting an interview with one of the game designers later today. We discussed what separates HyperBrawl Tournament from the competition and the landscape of subscription services in gaming.

HyperBrawl Tournament is available now over on Apple Arcade. It is a subscription service that costs $4.99 per month. For more information on other games that are available in its extensive library, check out our dedicated hub page.

You can head over to the PocketGamer LaunchPad hub to find all of our exclusive announcements from our two-day event - and don't forget to tune in at 5PM UK Time for our amazing reveal stream!
Next Up :
Ninja Must Die is an upcoming combat-focused action runner with stylish ink-based visuals, now open for pre-registration