My primary experience with OutRun has been playing it on an arcade cabinet within the world of an entirely different game. Though even considering the odd confines, I found that it managed to simulate the sensation of extreme speeds in a way that few games ever have. And so, naturally, I've been on the hunt for something similar.

As far as oft-reviled "nostalgia-bate" titles go, this one lies somewhere between Yooka-Laylee and something like Pony Island. The former relies wholeheartedly on the evocation of games that you've played and loved, often to its detriment, while the latter borrows a specific retro aesthetic for the purpose of obliterating expectations.

Horizon's intentions are admittedly straightforward – emulate the classics – but the simple fact is that it achieves this quite beautifully while boasting a sound understanding of what worked and what didn't in the games that inspired it. Simply put, Aquiris takes the core of an ageing genre and grants it new life. 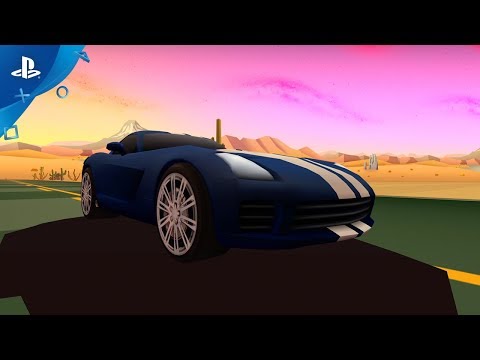 Most of your time with Horizon will probably be spent working through its extensive World Tour mode. This, as the name might suggest, sees you travelling the world, from California to Japan.

Ranking high on the podium will earn you points that gradually add up to unlock new stages, vehicles, and upgrades. Gone are the OutRun-style sprints in favour of more standard races, though I ultimately came to accept and enjoy the modern template.

If nothing else, the short-and-sweet nature of the tracks helps to keep progression feeling breezy, with each location offering a new choice of upgrade that will then apply to all unlocked vehicles – for sure, you'll be needing them.

The fight to get into first place is tough, but the real challenge is holding onto your lead. Any silly mistake can send your vehicle hurting violently into the air, and it's not unusual for such an error to knock you from 1st to 4th place.

Horizon's later vehicles are ferociously fast, almost to the point where you might actually have to make use of the brakes. So it's a very good thing indeed that the controls are consistent, meaning that you'll rarely feel cheated out of a win.

The difficulty curve is typically fair, though some of the trickier stages do run the risk of putting off many budding racers. It's fair to say that not everyone has the time or temperament to keep throwing themselves at these sorts of brick walls, and so clear-cut difficulty modes might have been helpful in alleviating any potential frustration.

To complicate matters, each track is also filled with optional coins to collect, though their implementation feels a tad unnecessary and basic. This feeds into a much broader issue, and that's that the stages lack interesting gameplay developments.

Sadly, the first track plays much the same as the last, with maybe a few tighter corners here and there. What does change is the speed and capability of your rivals, but this results in an oddly artificial difficulty curve. 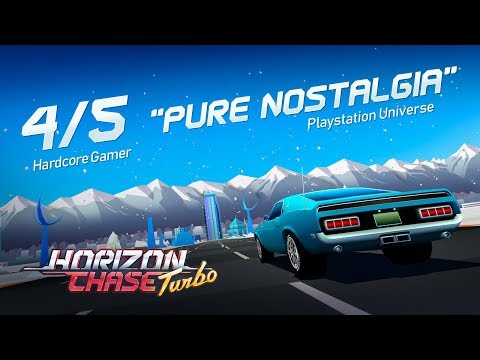 Thankfully, these issues are somewhat dulled if you opt to play in small bursts. And, honestly, with its rapid-fire 2 minutes races, Horizon absolutely works best when played as a handheld or mobile title.

World Tour might be the main attraction here, but Playground mode, a revolving selection of limited-time races with changing rules, slowly became a personal favourite. Truth be told, it's likely to be the main reason I keep dipping back in over the coming weeks and months, due in no small part to the time trials.

Areas that I don't have any quibbles with would be the visuals and the soundtrack. Tracks vary wildly in terms of colour palette and general presentation, and the score is a giddy joy to listen to, especially the various fanfares.

All in all, Horizon Chase Turbo doesn't bring too many new ideas to the table, but what it does offer is an extensive and frequently electric play on the 90s arcade racer. It's a mostly successful melding of the old and the new that has the potential to captivate, challenge, and excite players for hours on end.

Horizon Chase Turbo is a game of few fresh ideas that nevertheless remains compelling as an often electric arcade racing bonanza
Next Up :
Netflix Oxenfree review - "Reading the signals of a thriller story"