One could argue that the modern free-to-play phenomenon began as an attempt by videogames to match the runaway success of Magic: the Gathering. If that's true then Blizzard has cut to the chase by creating a virtual Magic clone - a collectible deck-building game in digital format.

Not that Hearthstone: Heroes of Warcraft doesn't deserve credit for innovation. While the basic model of two players holding cards with a mana cost will be instantly familiar to Magic veterans, Blizzard has taken the opportunity presented by the switch to digital to make it as streamlined, thrilling, and different as possible.

You pay for your cards from a fixed pool of mana that refills and increases by one each turn. The creatures you summon have a life total which gradually diminishes rather than a static defence - something that would be awkward to track in a physical game.

This in turn means that attackers can choose their targets - either a creature or the enemy player - and that has allowed the designers to give a unique twist to the strategy while keeping the game incredibly simple.

But for all that approachability, a monstrously detailed game lurks underneath. There are nine classes, each with its own unique cards, special powers, and approach to the game.

There's strategy in your deck-building and tactics on the field of play. And there's a decent selection of creature abilities too. But nothing overwhelming - just enough interlocking parts to build something astonishingly rich and deep in terms of strategy, but not so much that it risks confusing new players.

What is confusing, however, is just how far up this edifice goes and how carefully it's been constructed. New players frequently complain that those who've invested money into the game to obtain better cards have an unfair advantage.
But this is demonstrably untrue: veteran players have topped the rankings with free decks, just to prove it can be done. Cash is just a shortcut to power for the lazy. 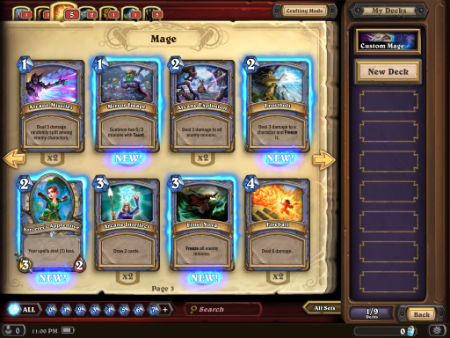 It's easy to see why people might get annoyed about pay to win skewing the rankings. The game has that brilliantly horrible sense of compulsion, that irresistible itch for one more turn, one more game, one more sleepless night to learn more, get better cards, enjoy a luckier draw.

Losing hurts, yet the desire to play on is tangible. Who wouldn't want to try and blame their string of losses on a bad game model, even if it is against the evidence?

It doesn't help that one of the few weak things about Hearthstone is the match-up algorithm. You can play against AI opponents, but they're not very good.

The real draw is building your decks and taking them out into the virtual jungle of other human opponents. But you get matched by your rank, not your card pool, and there are lots of players with powerful decks lurking at the bottom of the rankings to stamp on neophytes. 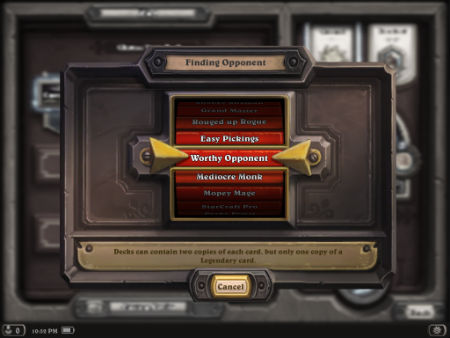 It's hard to resist spending real money to ease your path into power, and Blizzard knows it. It's telling that Arena mode, where you can compete on a level playing field by building a deck from a gradual card draft, is the only one that costs real money to enter.

Almost everything about the game showcases careful design and attention to detail. Even visually it's crammed with little touches to give a convincing illusion of physicality. Cards lift off the table and slam into their targets with a force proportional to the damage. The play field is interactive and new card boosters have a clever 3D effect.

There's a price for all these embellishments, though: the game chugs occasionally, even on quite powerful devices. But the touchscreen interface feels a natural way to play a card game.

While the competition are pathetically racing one another to the bottom of the free-to-play ladder, Hearthstone masterfully demonstrates that it's possible to make a brilliant fair game that needn't cost a penny and while still turning a profit.

It demands time and patience, but those willing to invest both will find themselves sucked into a vortex of excellence so deep that some many never escape.

A compelling distillation of everything that's great and good in collectible card gaming, brought to your iPad, for free
Next Up :
Alien: Isolation review - "Chestbursting fun in the palm of your hand"