[Update] Guardians of the Galaxy: The Universal Weapon, Marvel's movie tie-in gesture-based RPG, is out right now on Android as a premium app

Galactic (Updated: Out on iOS now as well)

You might remember last week we told you about Marvel launching a Guardians of the Galaxy game in Malaysia.

It was a soft launch, it was free, and we thought it pointed to a free-to-play release coming world wide in the not-too-distant-future.

Well, we've reached that future, and the game has come out. Except it's only out on Android. And it's a premium game. And we're all very confused and sad but also a bit happy.

The game is called Guardians of the Galaxy: The Universal Weapon. It features no IAPs, and you won't need an internet connection to play it. Which is nice.

You take control of a team of the titular guardians and fight your way through an original storyline. The campaign offers 60 levels of gesture-based combat, and you unlock new combos and allies as you play. 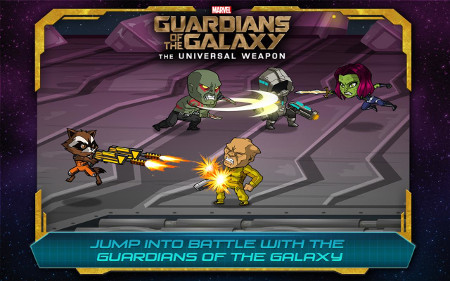 There's also an arena mode that sees you recruiting villains to fight alongside you. And you connect with Google Play Game Services or Facebook to show off your high scores.

Guardians of the Galaxy: The Universal Weapon is available right now from the Google Play Store, where it'll set you back £2.91 / $4.99.

We'll let you know when it makes the shift onto the App Store. Who knows, it might come out for Windows Phone as well.

Guardians of the Galaxy: The Universal Weapon