Real-time strategy games have a thorny history on consoles. It's a genre where controllers and touchpads can't substitute for mouse and keyboard. Part of that, though, is down to the conventions of the genre, and Golem Gates has something new to bring to the battlefield.

That something is a deck of cards. Rather than the typical building tree, in Golem Gates your hand of cards determines what you can summon. Some of them are units, others are static defences and a third class are spells to buff your minions or damage enemies. Each has an energy cost which depletes your slowly refilling meter.

Energy in this game comes in the form of nanites or some other techno-fantasy guff that fits the meaningless background. You gain it by capturing battlefield assets which, of course, your opponent also wants to control. But if you want to summon something, and you don't have the card in hand, it doesn't matter how much energy you have: you can't do it.

The good news is that you can customise your own card deck. And the game does a fantastic job in making the most out of this novel mechanism. There are no in-game purchases: you earn new cards for your deck through play. And in a neat twist, when your cards run out, you have to wait fifteen seconds while they're reshuffled.

In the heat of battle, this can easily win or lose matches. That makes balancing between a fat, slow deck and a small, refined one, engagingly tricky. 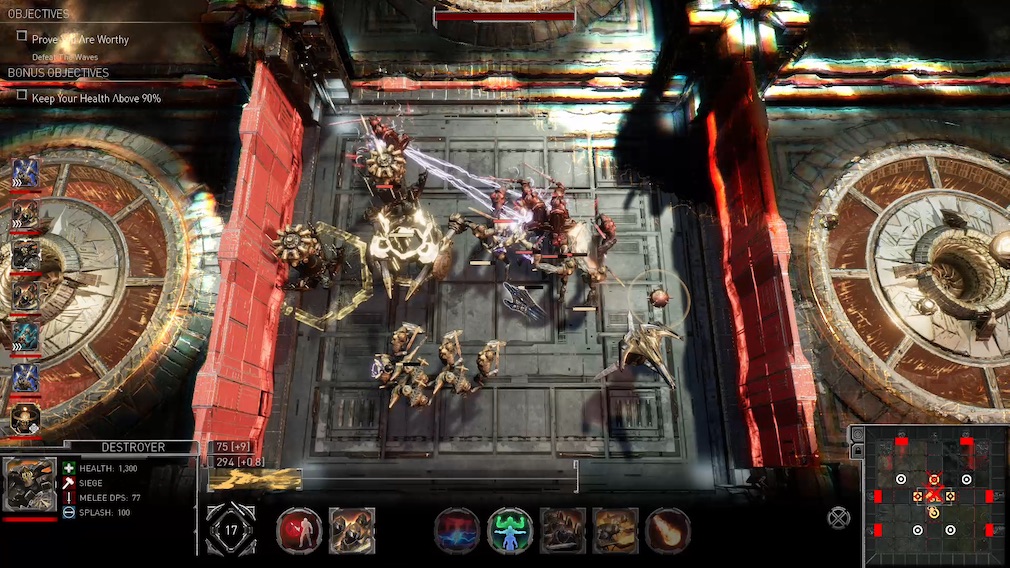 While there are plenty of card effects and unit types to work with, though, the deck has one key problem. If you're in desperate need of a particular thing, and you don't draw it, you lose. This is more common than you might imagine. If a group of units or, worse, your summoner gets attacked you'll want to spawn more minions to help defend.

If there's none in your hand all you can do is desperately try to cycle your draw until you lose. At its best, this can be a thrill ride. More often, though, it's just frustrating.

You can obviate the worst of this by building a deck to suit your play style. And working through the single-player games, earning cards and figuring out how you like to play is good fun. It's got that gnawing edge that tickles you to keep playing, keep learning, and keep earning. Nor is it a cakewalk. The enemy AI makes good use of the mix of unit types and targets weak points in your defences.

And this is where the trouble starts. For all the innovation in a card-based system, Golem Gates hits the same barriers that all its console predecessors have. Moving around the map by touchscreen is very clumsy. Moving it with joysticks is very slow.

There's an expanding-circle selection for units. Which is fine when you have time to spare but in a panic, which is most of the time, you'll want to hit the button and select everything on-screen.

This brute-force approach to control hammers flat any depth the game might have. There's not a lot of point in having a mix of unit types when you can't tell them apart on a handheld screen or select them individually with a controller.

Instead, playing Golem Gates on Switch feels a lot like an old-school RTS. Build the biggest army you can as fast as you can and throw it at everything which stands in your way. A problem exacerbated by some weak pathfinding.

Of course, old- school RTS games had a lot of success in their day. And the formula remains reasonably entertaining. It's just haunted by a nagging feeling that there ought to be more here to enjoy. Indeed that there probably is more to enjoy if you can enjoy it with the aid of a mouse.

Plus, the need to try and defend the scattered energy generators you've captured becomes annoying when you can only use one battering ram to do it.

Sound and graphics are distinctive and fit well with the grimdark theme. But even here the game falls victim to the Switch's limitations, making it hard to tell units apart and churning the framerate as the screen fills.

Golem Gates deserves plaudits for trying to do something new with an old formula and, from a mechanical perspective, succeeding. It just ought to have tried on a platform other than Switch.

Replacing a build tree with a card deck breathes life into the classic real-time strategy setup, but can't save the game from clumsy controls
Next Up :
Netflix Oxenfree review - "Reading the signals of a thriller story"