Running towards a neverending goal

It's questionable whether the App Store needs another football game at the moment, but luckily - despite its title - Go! Go! Soccer isn't really about the beautiful game.

Instead it's a neat little arcade action game that has you tilting your iPhone or iPod touch, as with Doodle Jump and similar, to dribble your player around the various obstacles facing him, such as other players (static and dynamic), referees and sand traps that would slow him down.

Indeed, the game is based around speed, as you have to pick up blue bottles to fill your sprint meter, which you activate by holding down the big arrow on the screen. This also helps you power over the sand.

Alternatively, you can pick up red bottles to get an automatic speed boost and become invulnerable for a short time.

Finally, if you're surrounded by obstacles, you can tap on any highlighted team mate to pass the ball onto them.

Of course, with these sort of games, it's all about the highscore, with developer Mutant Game using OpenFeint to power the global leaderboard system so you can tell how high you rank.

Your score consists of how far you ran before you collided with something, how fast you ran, how many passes you made and how many kills (players you ran through while invulnerable) you made.

Check out the following video to see how it works. 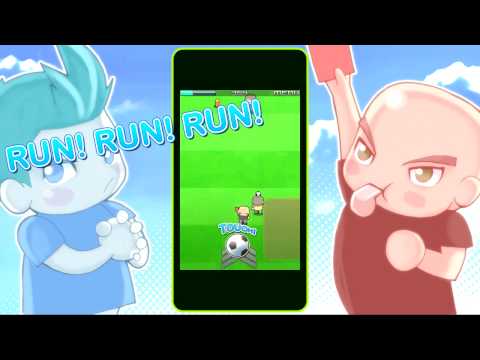 Dribble, power up, sprint and pass in Go! Go! Soccer