Today, XFLAG, the developers of the pinball-like gacha RPG Monster Strike, announced its latest project; a brand new 4-player co-op game entitled Monster Strike: Ghost Scramble. Set to launch in late July for Japanese audiences, Ghost Scramble will see you teaming up with your friends to use unique characters and hunt down a vast array of spectral apparitions together.

Where this concept gets a bit more interesting is that Ghost Scramble is less of a four-player co-op experience and more of a three-player one. This is because that fourth player will take on the role of a drone operator for the squad of ghost hunters, and will be delegated to specifically using it to buff their team and offer support utilities to make sure the hunt goes smoothly. It’s a pretty unique concept, and it’ll be interesting to see how this idea shakes out. 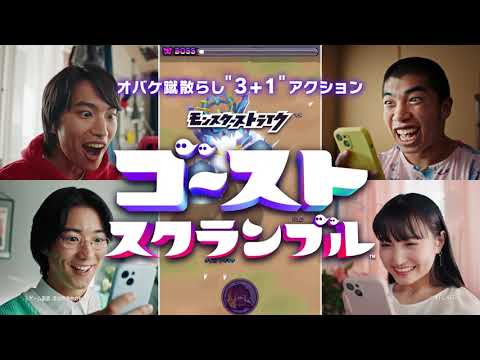 As for the gameplay, it’s not too far away from its younger brother, Monster Strike. The major difference is in Monster Strike, you’d be solo and controlling a squad of your own 4 characters, but in Ghost Scramble, you’ll be playing alongside a group of other players. This means that things could go much more smoothly if you can communicate well, but could also get quite hectic given that the single-player control aspect is gone.

To hunt these ghosts, you’ll be using a wide variety of weapons ranging from a giant laser beam to a normal submachine gun-type blaster as you mow down hordes of spooky slimes and giant blob ghost entities. It’s a very light-hearted experience, and the art style borrows a lot from Monster Strike, as does the general structure of the maps you’ll progress through too.

All-in-all, Ghost Scramble is looking to be a pretty interesting follow-up to Monster Strike, and an even better one if you were a player desiring more co-op-oriented gameplay. Currently, you can pre-register for Ghost Scramble in Japan on the App Store and Google Play. There’s no word on a global release yet, but given that XFLAG usually takes that route, it’s a relatively safe assumption to think we’ll hear news on that front soon.

Looking for more cooperative games to play with your friends? Check out our Top 28 best multiplayer games for Android!
Next Up :
Delete After Reading drops new trailer that reveals more about the game's quirky narrative