There seems to be a new mobile controller coming out every month at the moment, and for good reason: Apple Arcade, Xbox Game Pass, and Stadia are bringing more and more controller-ready games to mobile phones than the platform has ever had. As such, it's the perfect time to have a serious discussion about mobile peripherals, specifically the Nacon MG-X, an Android-compatible controller designed with Xbox Game Pass on mobile in mind.

The design of the Nacon MG-X Mobile Controller

In fact, it's so designed with Xbox Game Pass in mind that it has the Xbox logo menu on it. Other mobile controllers don't go this extra mile, which is completely fine other than the fact that it means that this controller has an extra - useful - button on it than them. If you're playing XGP using an Xbox Controller then you have access to the three menu/options buttons, so it makes sense that there's one of them here, on an Xbox controller alternative. 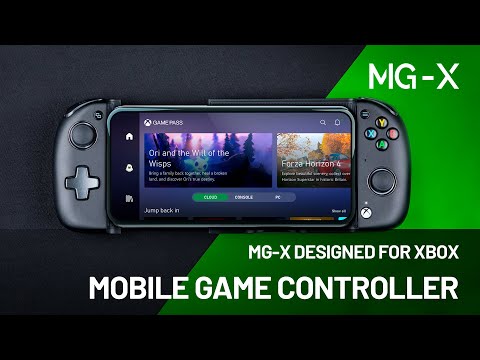 As a matter of fact, the whole thing is perfect for Xbox Game Pass. The analogue sticks are responsive, the LT and RT triggers are cushioned and so give varied, responsive feedback depending on how much pressure is applied. This is critical when it comes to console-designed racing games and is something that other mobile controllers are lacking. The nods toward Microsoft's controller don't end there either, the analogue stick layout is offset as with the Xbox, and the d-pad is one solid block rather than four separate inputs.

That said, with that many similarities it becomes essential to talk about the areas where it doesn't compare. The analogue sticks are smaller, and while they're comfortable (and the L3/R3 'Click' is great) their surface is raised rather than having the textured thumb rests that have become standard on consoles. In addition to this, the face buttons (A, B, X, Y) similarly 'click' well, but they're smaller and closer together than most mobile controllers.

There's a lot of good stuff going on with the Nacon MG-X, so much so that I wouldn't be surprised if it was sold as part of a bundle with a phone that includes Game Pass in the package. The designers have clearly been tasked with creating something that feels natural in the hands of a console gamer, and they've succeeded - that's thanks to everything from the handles at the back through to the Xbox styling on the menu buttons.

With design out of the way, let's talk about function. While it lacks the pass-through power solution that we've seen on the GameSir X2, which means that Nacon's MG-X needs its own charge, it does charge through the commonplace USB-C connection and holds about 20 hours worth of charge.

The USB-C connection is on the left side of the underside, with the Bluetooth synch button on the right. Although it's a small button it is only slightly recessed which means that you can push it in with almost any of your digits - much better than most competitors where you'll sometimes have to use a pencil or paperclip to get it searching for a device.

The elephant in the room, however, is the price. This is a premium product designed with an exact purpose in mind. It's a sturdy controller and features a lot of mod-cons that other controllers lack, it's also pretty much the best-dedicated controller out there for the Xbox experience on mobile, more so than the Xbox Wireless controller itself thanks to it securely holding the phone in place with grips. However, it comes in more expensive than the award-winning Razor Kishi. But, if money is no object then look no further than the MG-X.

Nacon MG-X Mobile Controller is a premium product designed with an exact purpose in mind. It's a sturdy controller and features a lot of mod-cons that other controllers lack, it's also pretty much the best-dedicated controller out there for the Xbox experience on mobile.
Next Up :
REDMAGIC 8 Pro review - "A beast in performance, but not without growing pains"