Finnish studio Housemarque is best known for its shoot-'em up Super Stardust; originally developed for Amiga and resurrected for PlayStation Network.

It's also working on mobile devices with Furmins for iOS being its debut title.

A combination of The Incredible Machine and Lemmings (sort of), you have to place objects within a physically simulated world to get the little critters called Furmins into a basket.

There's some backstory about them travelling to wake up their king, who has fallen asleep and blocked the river - I don't know either - but you don't really have to worry about that.

Instead, your focus will be rearranging items and using dynamic objects such as pinball-style bumpers and changing the direction of conveyors by tapping on them to create paths and physical chain reactions; the trick being you have to get all the furmins to the end of the level.

There will be multiple ways to solve each level and you'll be able to collect stars to further demonstrate your skill, while any objects you don't will be used to open up bonuses levels.

Mixing up the business models, there will be three versions of the game.

Price has yet to be announced, but there will be two premium versions - a universal one and cheaper iPhone one, both consisting of around 40 levels - plus a freemium one that contains 12 levels.

All versions will also include in-app purchases for downloading additional levels, and Housemarque plans to update the game every two weeks with new levels and items.

Due to be released this winter, you can see how it plays in the following video. 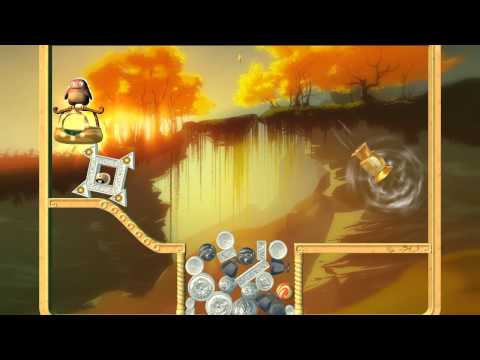