How to save the Federation - top tips for FTL: Faster Than Light for iPad (Part 1)

Helping you to die less quickly

Roguelike games are traditionally fairly daunting prospects for the uninitiated.

FTL: Faster Than Light for iPad is no exception.

It might boast a friendly-seeming tutorial, sure, but you'll soon discover it's a wicked sham, designed to fill you with a false sense of hope before the rebellion blows you out of the galaxy and goes laughing all the way back to its flagship.

In truth, there's just too much essential detail concerning the mechanics and brutal difficulty level left out in the introduction. So, the only way to find out what it skips over is to tackle the game's vertiginous learning curve head-on.

Or read our handy strategy guide. Which is right here.

Your ship can hold up to eight crew members. Many of the things you'll want them to do - manning the weapons, shields, engine, and piloting systems; repair work; combat - result in them gaining experience and improving in that ability.

But it's a slow process, so it's best to acquire crew members early, assign specialisations to them, and keep them alive.

Only the four key systems mentioned above have experience bars - that's where you first four crew members should go.

There are two more stations on the ship that benefit from crew, doors, and sensors, so that's where your next two go. You're best off saving the final two crew members for freelancing repair or combat roles. 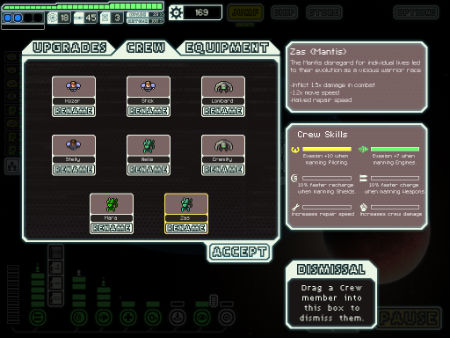 Your crew are the lifeblood of your ship

The different races in the game excel at different tasks.

Engi are particularly good at repairs, for example. Zoltan, meanwhile, give the system they're crewing a handy extra power bar. Both are rubbish at combat, though, so they're prime candidates for keeping on board, manning (or alien-ing) essential systems.

Mantis, on the other hand, dish out extra pain in combat. Rockmen, however, have phenomenal health. And Lanius possess the anti-social ability of draining oxygen out of rooms. All three of these races are well suited to combat roles, then.

If you're lucky enough to find a Slug crew member, then you should keep it on board, too. By doing so, you can take advantage of its incredibly useful telepathic abilities. Humans are okay at everything, by the way. They excel at nothing in particular, so can fill any role.

There are a lot of weapon types in FTL: Faster Than Light, which you pair off against defences in a sort of complex and futuristic version of rock-paper-scissors.

But if you're using the default starting ship - The Kestrel - you'll begin the game with a burst laser and a missile launcher. These two classes of weapons are very effective when used together. They should be the mainstay of most offensive setups.

Laser weapons fire between one and five shots. Each of these shots can be stopped by a shield, though the shot will nullify the shield for a short time. This means that if you've got more than one laser, it's a good idea to wait until they're all charged and fire them together. That way, the first few bolts eat through the shields but all the rest get through to damage the target. 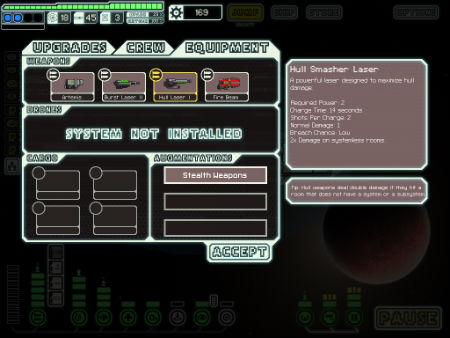 Hull lasers are very powerful used in concert with other weapons

Missiles ignore shields completely. Since shields are the central plank of most ships' defences, that makes them very powerful. But they're not foolproof. Ammunition is limited, and defence drones - which can't touch lasers - can shoot them down.

The Kestrel's burst laser alone is enough to get it through the first few sectors, so it's wise to save the missiles for emergencies and build up a stockpile of ammunition for the harder fights later in the game.

You can aim most weapons at specific parts of the target ship. As a general rule, the best approach is to hit the enemy weapons room with everything you've got. That means it stops them fighting back.

But there are exceptions: if you're facing a heavily shielded ship with a battery of laser, for instance, taking down the shields is worthwhile. Targets that are about to run can be stopped dead with hits to the engine room or cockpit.

If you click the 'Ship' button on the main screen, you'll see a menu from where you can purchase additional power slots for the various systems on your ship, and power bars to fill them. But this rapidly becomes a very expensive process, so you need to choose wisely and carefully.

The first thing in which you ought to invest is a bit more engine power. This increases your evade chance, a.k.a. the only foolproof defence against all incoming fire.

Plus, the higher your chance, the quicker your engine room crew will improve, making things even better. But don't buy too many - engines, like most systems, have a point of diminishing returns. Find out where it is and stop there. 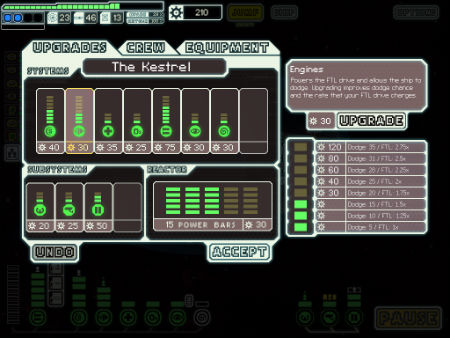 Pay attention to the effects on the right when buying upgrades

After that, there's no single approach. You'll want one or two more shields eventually, sure, but that's an expensive upgrade (since each extra shield needs two slots and two power). Once you begin to find and purchase extra weapons, you'll need to power them, too. But that's expensive... because weapon slots just are.

To afford all of these upgrades, you'll need plenty of Scrap, the in-game currency. You can never have enough Scrap. The only way to obtain it is to visit as many planets as possible, in the hope that each encounter will mean you can add to your growing hoard.

But here's a crucial piece of information about which you aren't told in the tutorial: there's no advantage to racing ahead of the rebel fleet.

You see, it moves at the same steady pace behind you across each sector (slower in nebulas). And you always have the same grace period without it sniffing at your tail after you enter a new sector.

So, don't run. Keep ahead of its advance. Other than that, dawdle. Zig-zag back and forth across the map, and try to judge how you can get in as many encounters as you can while staying just in front of that menacing red curve.

It's tempting to blow Scrap on upgrades as soon as you can, but that's a mistake. Along the route, you'll run into various stores from where you can purchase new weapons, crew, and sub-systems for your ship.

We've already discussed the importance of acquiring extra crew early. Similarly, there are several systems that can prove to be life savers later in the game, so are worth getting as quickly as possible. We'll discuss these in Part 2 of this guide.

For now, though, just be aware that you should always keep a couple of hundred Scrap in reserve... at least until you've got the systems you want installed and your crew roster filled.