How to save the Federation - top tips for FTL: Faster Than Light for iPad (Part 2)

Helping you to expire with grace and dignity

If you've read and digested Part 1 of our guide to the Gold-Award winning FTL: Faster Than Light, you should be safely through the first few sectors of the incredibly hostile and dangerous galaxy in which this game is set.

However, once you're halfway home, things become a lot more varied and a lot tougher.

But don't despair! We're back with another set of handy hints to keep you flying through to the end.

There are a lot of Augmentations you can purchase for your ship. So many, in fact, that you'll probably end up wishing that you could install more than three of them at once.

As a general rule, the best ones to look out for are those that mean your shields recharge faster, your weapons fire quicker, and your Scrap income increases.

But you can go far beyond mere upgrades: you can install entirely new systems. Good job, too, because several of them are incredibly useful. 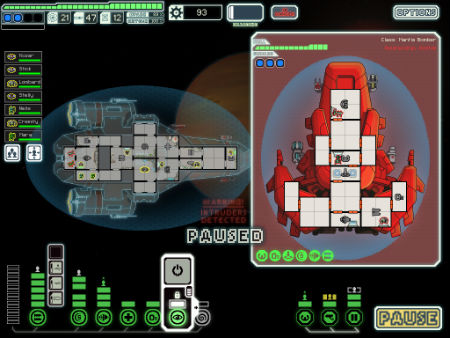 Cloaking is a great way to hide from scary, red, spiky Mantis ships

Perhaps the most essential - essential enough to have warranted a price increase after the most recent update - is the Crew Teleporter.

This enables you to beam crew onto the enemy ship and engage its crew in combat. Why is this important? Because if you can defeat a ship by killing its crew rather than destroying it, you'll get a lot more Scrap out of it.

But you need experience and split-second timing to use the Teleporter properly. It's often best to soften up the target room with a volley of shots first, damaging the occupants.

And you need to be able to recall your boarding party rapidly if things start to go wrong - a one-bar upgrade to the system can be very useful for accomplishing this. Don't teleport aboard ships without oxygen, like automated drones, and don't destroy an enemy while your crew members are on board (else they'll be killed).

The other subsystem to watch out for is the Cloaking Device. This operates as you might expect: it makes your ship briefly invulnerable then needs a substantial recharge time. However, the ability to avoid the initial salvo from an enemy ship, allowing you to get the first strike and disable its weapons systems, can be invaluable.

Without giving too much away, it's also worth flagging up that both these upgrades are particularly useful in the final fight.

All the other subsystems you can install are useful, but they're generally best used for experimenting with different strategies rather than for a core approach. The clone bay from the advanced edition is an interesting one. It resurrects dead crew but is unable to heal them quickly, which can be problematic if you rely a lot on boarding parties.

There's one other subsystem that deserves a section of its own: the Drone Controller.

Drones come in various types. Each one you install takes up a slot in the Controller subsytem - like weapons do in the weapon system.

Whenever you bring one online to use, it costs a drone part. These are useless if you don't have a Controller installed, so if you're not using drones, sell them on whenever you can. If you're using a lot of Drones, the Drone Recovery augmentation is a must-have item. 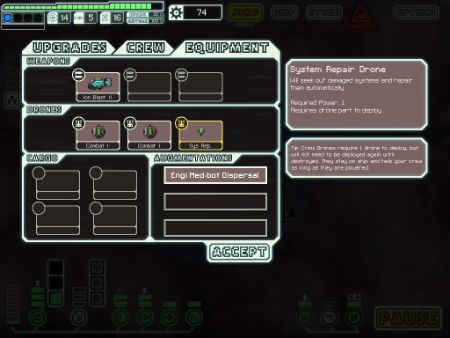 The unlockable Engi ship relies on anti-ship Drones for offence

It's possible to use a battery of offensive Anti-Ship Drones in place of weapons. They're not terribly effective used on their own, though... not least because they fire automatically, so you can't co-ordinate your offence.

If you can somehow disrupt enemy shields, perhaps using Ion weapons or Hacking, they can be very dangerous. Otherwise, save your Drone slots for other functions.

If you're determined to use drones aggressively, get a Boarding Drone. These tough robots will dish out a lot of punishment to enemy crew members before they go down, leaving an easy mopping-up job for your follow-up boarding parties, or even the possibility of finishing off wounded personnel with targeted weapon strikes. Ion Intruders do less damage, but they do shut down enemy systems.

Generally, it's better to save Drones for more passive roles. The Ship Repair Drone, for example, is great, since it's the only way you can repair hull damage without stopping at a store. And, of course, it'll likely save you Scrap in the long run, for you won't have to carry out a load of repairs.

But the best drones are probably Defense Drones. Both are capable of shooting down enemy missiles and incoming boarding drones, which can be an absolute lifesaver against heavily armed opponents, such as the final boss.

No, not that boss. The FTL boss: the Rebel Flagship.

This section obviously contains minor spoilers, so you might want to skip it if you're masochistic enough to want to learn to deal with this bad boy the hard way.

And it is hard. The Flagship is an order of magnitude tougher than anything else the game can throw at you. So much so, in fact, that many veteran players who've learnt to reach it with relative ease have never actually managed to beat it.

We can't teach you to beat it: it requires skill, experience, and luck. But we can help you in some fashion.

The normal rules about visiting locations is reversed on the final sector. You won't find much help unless the system is marked as 'repair', and the hostile ships you do encounter are powerful rebels who'll rough you up. This is vital to remember, for you need everything in working order to have a chance of beating the big bad. 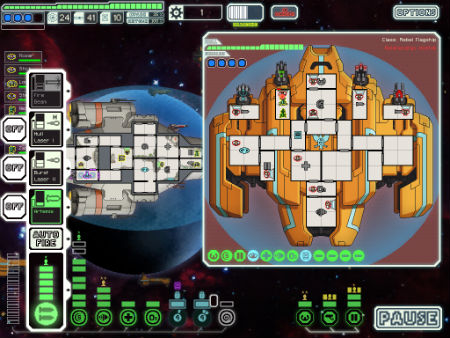 Be afraid. Be very afraid

You've got a limited time window in which to take him down. So, look at your map and plan the most direct route, taking in a repair station if required. Before you do, make sure you've spent all your Scrap on maximum upgrades. You need three - ideally, four shields - and an arsenal of powerful weapons.

There are three phases to the fight.

The first order of business is to try and take down some of its super-weaponry. This is easy if you've got a teleporter, because all the weapons are in sealed rooms where you can gang up on the operator without fear of retribution. Take out the centre-left one first, as it's the most dangerous. Then, the far-right one.

By this point, the flagship shouldn't be able to hurt you very much. So, odd as it may seem, stop firing at it. Use your teleporter to keep sending boarding parties over and seeing if you can kill all the crew bar the two remaining weapon operators. You mustn't kill them all, because, bizarrely, a super-efficient AI then takes over and will crucify you with ease.

With that done, finish him off. Except, he's (rather predictably) not dead. In fact, he's even more powerful than before.

This second phase sees the flagship pepper you with drone swarms, including boarders, which will quickly destroy you if you're not prepared. This is where cloaking comes in handy, for you now get a warning of the drone surge and can cloak your ship to ease off some of the threat.

It's still difficult, though, as the target is now immune to missiles (on account of a defence drone) and still has four shields. A boarding party can try and take out the shield and drone systems. But this phase is tough, because there are so many different things to co-ordinate, all of them urgent.

The third and final form is, disappointingly, the easiest. The flagship now has a super-powerful shield and a surge that can hit you with a barrage of laser bolts. But the latter is easily avoided via cloaking, and overcoming the former is just a matter of patience.

Next Up :
All Star Tower Defense codes (December 2021)