Glu Mobile is really pumping out games as the year comes to an end.

And as with its topdown tactical zombie game Infected, its most recent release Frontline Commando brings a different twist into the world of freemium gaming.

Akin to a shooting gallery, you take the role of the commando, who's tasked with fighting off waves of enemies, jeeps, helicopters etc earning gold and war cash for your performance, and so upgrading your guns, armour and items as you go.

The controls are interesting as you have a number of destructible cover points in each level you can move between by tapping on the arrow points on the left or right of your screen. Aside from this, however, you use one thumb to move your gun's crosshairs around while the other is available for options such as firing, ducking, changing weapons, reloading, using items such as health packs or using zoomed in sights.

You can only equip two weapons at any time, with types ranging from assault rifle to shotgun, grenade launcher and sniper rifle.

Graphically the game is up to the high standards we've come to expect of Glu, with the arcade gameplay meshed with some tactical nous in terms of how you move between positions - to avoid grenades for example - as well as pulling off headshots, and ensuring you use your ammunition as carefully as possible; the guns tend to have long reload times.

Of course, this being a freemium game, there's some friction between your skill improvement and the implicit encouragement to drop some cash so you can buy better weapons, get armour or stock up on airstrikes, but as with Gun Bros. and Contract Killer you can get a good experience of the game before you have to make that decision.

Frontline Commando is currently out for iOS and Android devices, and is free-to-play. 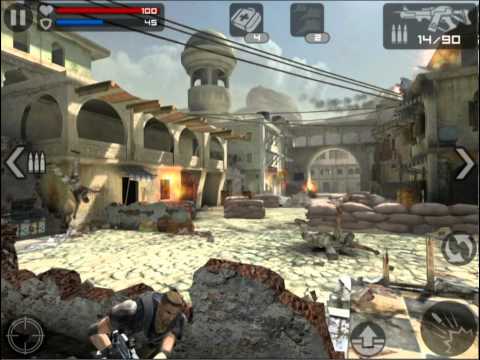 Subscribe to Pocket Gamer on
Next Up :
Arknights has launched Season 10 of Contingecy Contract: Operation Arising

Up gunning for glory

Frontline Commando levels up with One Man Army update