After months of tirelessly slogging away at the unforgivingly harsh keys of a budget laptop, scouring the web for freebie gaming fruits, your correspondent's hands became so gnarled and contorted with toil that they came to resemble claws.

But after a brief strength-recovering and resolve-collecting break, they're back fighting fit, uncovering freebies left, right and centre and ready to sate readers' rabid appetites.

First up this week is a return visit to one of the most bountiful freebie resources out there, the PSP Demo Centre. Recently added to the list is Dungeon Explorer (which incidentally is coming to the DS, too), a classic multiplayer Gauntlet-style affair. As is often the case, the demo is in Japanese but luckily the action is played out in the international language of hack 'n' slash and so shouldn't be too difficult to 'translate'.

(If the PSP Demo Centre link doesn't work – it was a bit iffy earlier today – then try here instead. The site is in Japanese but if you hit the big red link at the bottom of the page you should be prompted to save the demo file.)

Though substantial, that isn't all for PSP owners this week. Issue eight of LOAD Magazine is now available for free download, featuring reviews of Quentin Tarantino's latest film, Grindhouse, the Go Team's new album, Youth of Proof, as well as a feature on the photography of Jason Lee Perry.

On to DS, then, which as always must rely on the dark art of homebrew for its freebie fix. In the shadow of the forthcoming Paint by DS (which you can read all about in our developer interview), we thought we would seek out a homebrew alternative.

What we found is called Colors!, which is basically a simple art app which has apparently been inspired by the painting techniques used in Photoshop and Painter. Of course, you'll need to be running a homebrew set-up in order to use this. (If we might as well have written that last sentence in Japanese for all the sense it made, you can get the lowdown on homebrew in our How To feature.) 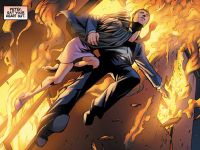 And while you have your homebrew set-up on the go, it might be a good idea to pay The Moon Books Project (one of our absolute faves) another visit. Why? Only because it now has every single issue of the comic book spin-off of the popular TV show Heroes available for free download. Kapow! Take that, boredom.

Don't forget, the DS's tendency to be somewhat illegal (or at least frowned upon by Nintendo) when it comes to freebies is not set to continue for long as this week we got news of official plans to launch a DS demo channel on the Wii. Here's hoping after it is launched the Friday Freebie should become a much more DS-friendly affair.

Lastly this week is a freebie we are somewhat surprised we haven't come across before (perhaps we have, our dwindling memory fails us). The mobile games portal, Real Arcade, has a decent selection of titles, all of which can be downloaded free of charge to try in demo form before any purchases are made. Titles include Luxor, Playman World Soccer, Summer Games 2 and Trivial Pursuit Music Edition, amongst many others.

That's it for now. You can all breathe a collective sigh of relief as we promise you'll only have to wait seven days for the next batch of free handheld gaming cheer. Click 'Track It!' to make sure you don't miss it.