It's not just cricket, the studio who brought Freddie Flintoff to mobile tells Pocket Gamer

Java
| Freddie Flintoff All Round Cricket 06/07

Shadow Light Games was founded in 2001 by renegade developers from the now-defunct but formerly high-profile developer Elixir Studios. It's latest mobile game, Freddie Flintoff All Round Cricket, bowled us over (sorry, these puns just trip off our tongues – it's a gift) and the studio also created the likes of Pinball Legends: Reactor and Violent Veg Attack.

We batted a few questions over to its managing director, Aamar Rana.

Why did you choose to launch a mobile games developer?

We wanted to get back to the roots of games development, with small teams making creative projects. The PC and console industry has suffered in this respect as development costs have gone through the roof in recent years, which has made publishers very cautious and risk-averse.

Originally we wanted to get into GBA and other handheld consoles, but it soon became clear that mobile phones were going to eclipse these very quickly – so we jumped ship! It was a bit of a risky thing to do at the time, but on reflection, it was a very good move.

How does it compare to the console development world you'd previously worked in?

It's very refreshing to be able to make a game in under six months. We're used to spending two to three years on a game, with a very large team. That's all changed now we're working with mobile. You also get a lot more creative control and input, as one person is responsible for much more of the game.

It's also funny how similar it is as well: who'd have thought we'd be making scenes in full 3D for mobile? It turns out you can use much the same programming techniques and art skills on any platform. You just wouldn't know it to look at most of the games mobile out there.

You're tagline is: 'The console experience on mobile'. Is this really possible on current technology, and isn't it out of your hands?

Consoles have been around for a long time, we're not claiming that we can match the real-time 3D graphics of the latest generation on mobile.

The console experience isn't really about technology, it's about giving the gamer a great experience every time. It's about quality and attention to detail. The user interface and presentation are paramount, backed up by challenging and addictive gameplay.

We've been disappointed that these standards have not been upheld well by mobile phone gaming so far. We aim to change that. 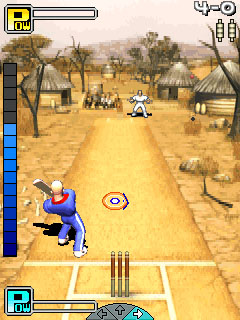 Cracking: Freddie Flintoff's All Round Cricket

Can you give us a quick insight into how a game like Freddie Flintoff All Round Cricket goes from idea to reality? Who calls the shots there?

We operate a pretty democratic system at Shadow Light Games. We'll get together to brainstorm a few ideas, then someone will go off and write a basic game design document. We'll all make our comments on that, and over time the weaker ideas are filtered out and new ones take their place. It doesn't really matter who the ideas come from.

For Freddie, Player One wanted to make an accessible and fun game that would appeal to a wider audience than just die-hard cricket fans. We quickly arrived at the idea of a one-on-one cricket game, concentrating on batting and bowling. We had some pretty cool physics technology from our pinball game, Reactor, and used that to make the game feel right.

To make the game accessible, we went for straightforward controls so that anyone could pick the game up and get satisfaction from it in minutes.

The one-on-one format also made Bluetooth multiplayer an obvious extension to the core game, and we think people are really going to love the challenge of taking on their friends. We certainly had a great time developing it!

But what involvement did Freddie Flintoff – or at least the agency handling his licence – have in the game? Did they have to approve the elephants?

The Freddie character we created was approved by Player One and their relevant channels. The elephants were our idea, and they had no objections. Freddie Flintoff: All Round Cricket must be the only cricket game with elephants in it!

Out of the shadows: Managing director Aamar Rana (centre),
with fellow SLG-ers Ian Harper (left) and Chris Dawson Too often technology seems to come first in mobile game design, with developers just putting new characters (or brands) onto existing engines. How do you exploit your in-house engine without falling into that trap?

Really that just comes down to lazy design on the part of the developers, maybe for cost reasons or maybe they just want to stick with what they know. It's a turn-off for gamers though, who don't want the same game again with different graphics.

We use our technology library as the foundations for a game, but use it in different ways for each project.

It's more like a set of building blocks we can reconfigure to create a wide variety of game environments, rather than a 'one-size-fits-all' engine.

A game we've really enjoyed has been Air Hockey, by Uztek, published by EA. It's very slick and the developers clearly know what they are doing. We also liked V-Rally 3D, the presentation is excellent. That's by FISHLABS, published by iFone/Glu Mobile.

What is coming from Shadow Light Games in 2007?

We have several high profile titles in development, and should be making announcements early in the New Year. You can keep up-to-date by checking out our website.

Finally, what do you see in-store for mobile gamers over the next year or two?

Obviously, the meteoric rise in processing power, screen sizes and memory are really going to enhance the gameplay experience. We're looking forward to decent 3D capabilities, and are very excited about the prospect of wi-fi for high-speed internet access and community features.

Touch screens are pretty cool too. The Sony Ericsson M600i is a good example of the direction things are going in.

We'd also like to see network operators imposing higher standards on the games they sell. Too many people are burnt by a bad game and don't come back. Maybe Nokia will step in with their own initiative N-Gage Arena, or maybe the threat will be enough.

Freddie Flintoff All Round Cricket

Freddie Flintoff battles back onto mobiles