Fortnite Chapter 3: Season 4: Paradise is here to Chrome-ify everything with battle pass including Spider-Gwen and The Paradigm

It’s a big day for Fortnite fans as the battle royale’s latest season, Chapter 3: Season 4: Paradise, finally goes live today. Epic Games just released the cinematic and battle pass trailers for this season - and boy, there is a lot happening. From Spider-Gwen to a mysterious new substance, the Island's updates have once again made the place home to new threats and new heroes to save the day. 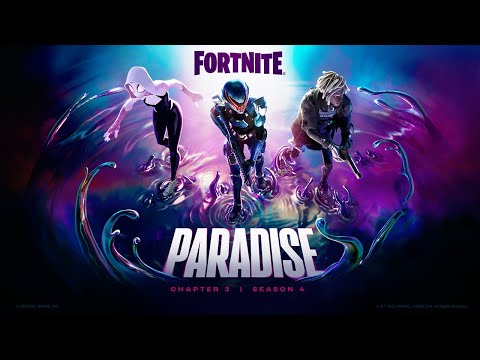 Fortnite has been known to follow a consistent storyline with each season. They always find a way to tie in events and characters like The Seven, The Geno, Zero Point, The Cube, and so much more. Last season, we got a glimpse of the Bloomwatcher, who seems to play a more crucial role in Paradise.

The cinematic trailer showcases the Scientist studying a silvery substance called Chrome, which seems to be taking over the island. It’s quite reminiscent of how the venom symbiote works in the Marvel Universe - and with Spider-Gwen being a part this season, maybe the two could be tied together?

The Chrome seems to be quite unstable, and soon enough, it takes over the Scientist and the Origin, with Paradigm nearly escaping. It’s up to her and a few other heroes to save the day now as the Bloomwatcher’s plans come to fruition.

The Chrome is out to consume everything, and it is going to massively shake up Fortnite’s gameplay. Just about anything on the Island can be coated in Chrome. Chucking the Chrome Splash on enemy-built structures make them penetrable, allowing players to walk through walls as well.

Chrome-ifying yourself is an option as well. In sticky situations, the best option is to become pure Chrome temporarily. Players in this state will be immune to all damage and will move much faster. They will also Chrome-ify everything they touch.

All the Chrome comes from the Herald’s Sanctum, a new POI that is near the Abandoned Sanctuary. With it also come new weapons - the Evochrome Shotgun and Evochrome Burst Rifle that can be found specifically in Chrome Chests.

The most sought-after part of every season is the glorious battle pass. Players will be a little disappointed with the lack of a customisable skin in Paradise, but the ones included are awesome nonetheless.

Season 4’s battle pass includes the Spider-Gwen Skin, The Seven’s Paradigm from Reality-659, Lennox Rose, Chill Cat Meow Skulls, and more skins and cosmetic items. Even the nefarious villain, The Herald, will be available to unlock at a later date.

It's going to be a few action-packed months as players run around the map covered in Chrome trying to eliminate others. Be sure to visit the new POIs and make use of the seriously buffed snipers, because one-shotting is back!

Also, check out this list of the best battle royales to play on mobile!
Next Up :
Garden Tails: Match and Grow, a brand new match-3 puzzler with customisation elements, launches onto Apple Arcade

Fortnite is celebrating its fifth birthday with new quests, rewards, and the fortography event

Fortnite is celebrating C3S4: Paradise's launch with the Reboot Rally