Considering its heritage with the FIFA series for EA Mobile, not to mention its own recent release Bonecruncher Soccer on iPhone, UK developer Distinctive has a strong reputation when it comes to sports games.

That's something it's building on with Football Kicks.

On one level, plenty of titles such as Flick Kick Football and Flick Football were released last year to coincide with the 2010 World Cup.

Distinctive's experience means it's taken a more realistic approach in terms of 3D graphics and animation.

In addition, this is a freemium game. That means you can download it for free, and collect the in-game currency - FK coins - by playing to unlock new stadiums and customise your player's kit.

As for the game's features, there are three modes: Beat the Wall, where you have to hit the targets while avoiding the players in the way; Beat the Clock, which gives you 60 seconds to score as many points as you can; and Sudden Death, in which you have to hit points on each kick to get another go. 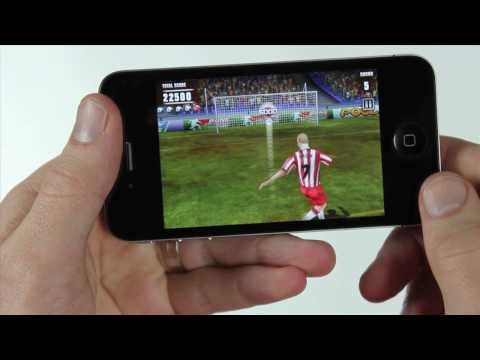 Subscribe to Pocket Gamer on
Next Up :
Marvel Snap launches new season ahead of the release of Ant-Man and The Wasp: Quantumania

Get Football Kicks all through the night