Get your flail on: QWOP-style fighter Flop Fu is out now on Google Play

Flop Fu, for those unfamiliar, is a bizarre mash-up of Street Fighter and the tough-as-nails QWOP with a bit of Divekick thrown in for good measure. You pick a fighter and then have only two buttons to worry about: one for flop, the other for flail.

Unlike other titles in the genre which require you to memorise and master intricate combos to flatten your opponents, Flop Fu requires only that you keep your patience as your fighter slowly ungulates toward his or her foe. 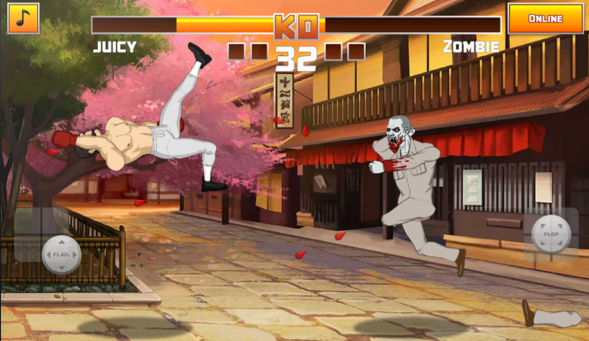 What really sells Flop Fu, however, is its tongue-in-cheek humour.

You can choose from standard fighters like Sonya Blade Military Girl or you can play as a zombie, astronaut, or old timey boxer.

There's also a good bit of attention paid to the audio and overall experience in Flop Fu, making it an unexpectedly well-polished fighting game. Better yet, you can challenge friends to real-time multiplayer battles and tear their limbs off.

Flop Fu might not be the game that arcade fighting enthusiasts are looking for, but if you've got a sense of humour - and inexhaustible fonts of patience - you'll probably find a lot to like here.
Next Up :
Saint Seiya: Legend of Justice celebrates achieving 1.5 million registrations with a series of giveaway events