Flip Master is Miniclip's second acrobatic high score chaser. Unlike its predecessor, Flip Diving—which challenges players to fling themselves off a variety of points and safely reach the water below—Flip Master places a trampoline beneath its protagonist's feet, allowing for long chains of jumps and tricks that end only when you land incorrectly.

Increasing the length of those chains and improving your high score ultimately comes down to practice and getting a feel for the game's physics, but we've shared a few tips below to hopefully help speed up the process. 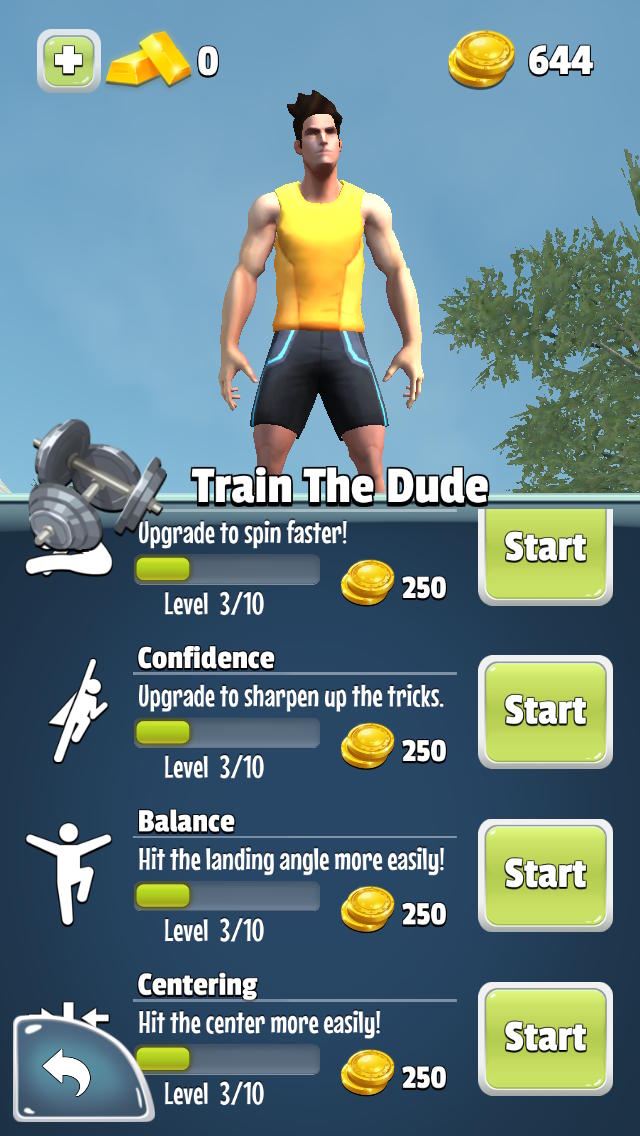 When you first begin playing, your character (The Dude), is not great at performing tricks. His flips are loose, limbs floppy, and landings shaky.

In order to improve his abilities, you'll need to spend in-game coins on training him. From the character select screen, choose "Train!" and you'll see a list of five skills you can improve.

We recommend putting points into Balance first, Centering second, and Confidence third. Eventually you'll want to upgrade all of his skills, but these three—especially Balance and Centering—will make it much easier to land safely and keep your run and score streak going. By the time these abilities are upgraded to level three, The Dude's jumps will feel much smoother and controlled.

Training only applies to one person at a time, so if you have other characters unlocked, they will have their own separate skill tree that will need to be upgraded independently. Focus on upgrading one character to higher levels instead of spreading your coins across multiple people.

Spin it to win it

Although you'll want to save up coins for training, be sure to allocate some for spinning the prize machine. You can earn more characters and locations here, as well as power-ups and new tricks. The latter of these will be very useful in improving your score and keeping streaks going.

When you receive a new trick, it's added to the list of buttons on the righthand side of the screen while playing. To perform different types of flips, you simply tap and hold the button of the trick you wish to execute.

New locations provide better trampolines which make it easier to jump higher and score more. Earning a higher score awards more coins, allowing you to train further and spin the prize machine for better locations and tricks, and so on. The prize machine does increase in cost every time you use it, but you'll be able to win more coins overall with the rewards it dishes out. 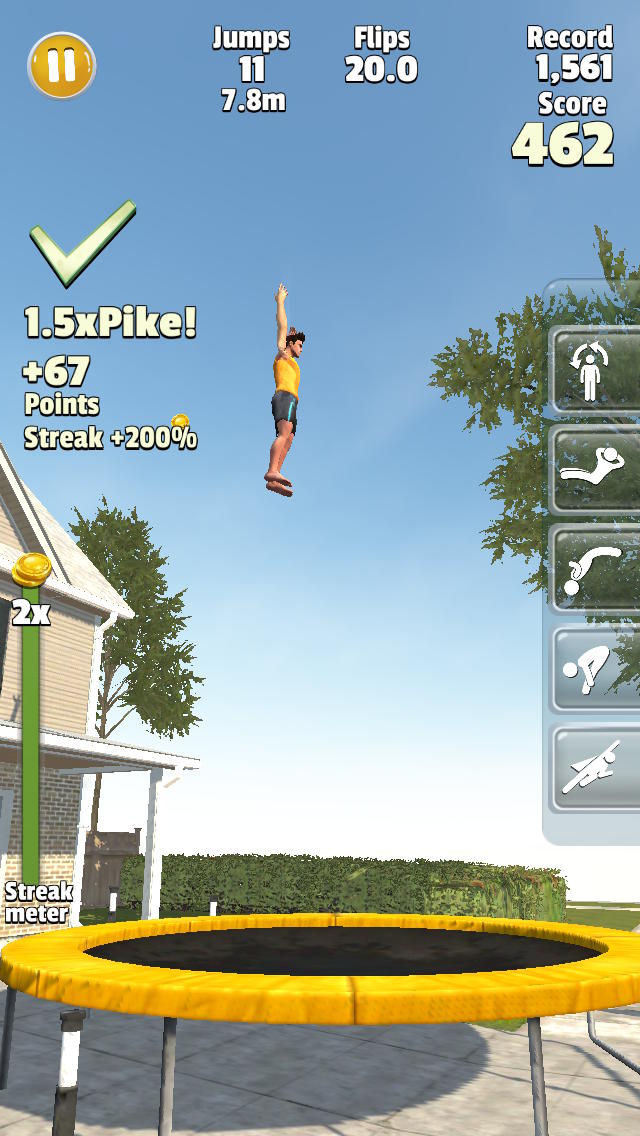 While jumping, you might notice a "streak meter" appear and tricks listed with a streak percentage. A streak is earned by doing tricks successfully in a row—which means completing at least one half of a trick and then landing on your feet or back. However, you also need to change up your tricks regularly: doing ten flips in a row will not maintain a streak.

You want to always be working toward a streak since it awards more points for each trick and reaching +200% (with the 2x meter filled) will spawn extra coins you can collect.

As soon as you start jumping, do a pike and then a flip to get the streak meter started. After that, just keep doing tricks, alternating the type of trick at least every three jumps. (E.g., if you do two pikes in a row, try to do a non-pike trick for the third jump.)

On this note, while you want to change up your tricks regularly to maintain your streak, there's no advantage to doing multiple tricks in a single jump. This won't award any extra points (besides the normal amount for doing the trick) and is usually hard to pull off with a successful landing. Focus on one trick per jump, holding the button down to complete that trick as many times as possible, then do a different trick on the next jump. 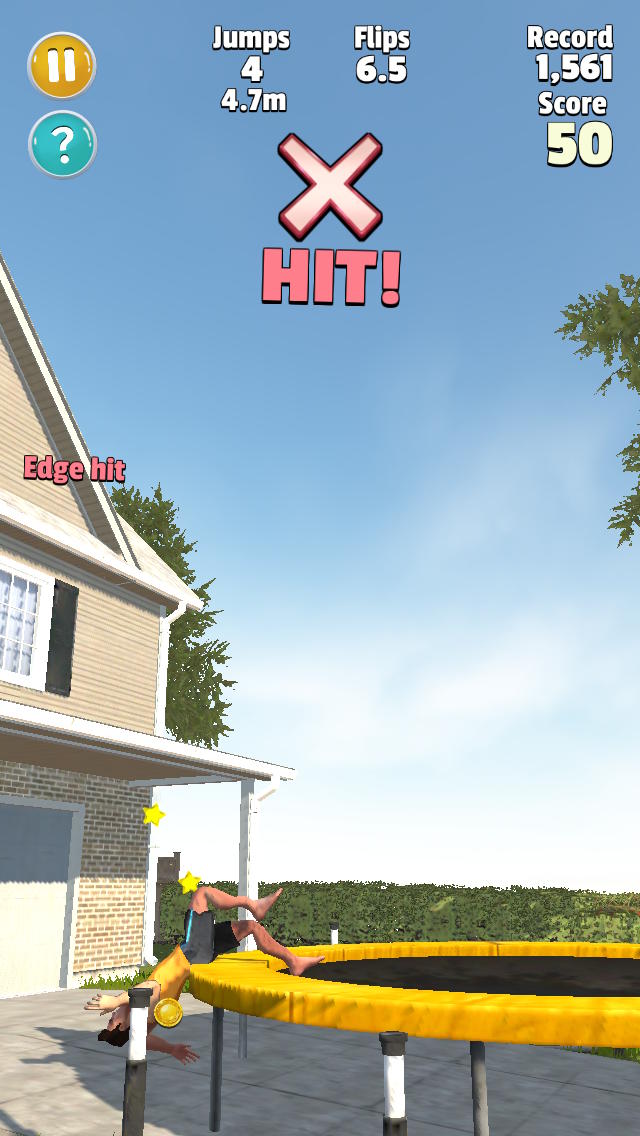 Besides alternating tricks to maintain a streak, your other primary challenge in Flip Master is simply landing safely after each trick. This is harder than it sounds, especially at the beginning of the game when your character's abilities are untrained.

The first thing to keep in mind is that you always want to land on your feet or back, and landing on your feet is the preferred method. Doing so will give you a higher and more controlled bounce back into the air, while landing on your back can sometimes catapult you in a weird direction. Your feet are also safer than your back, which with even the tiniest rotation can turn into a game-ending head hit.

Your character will try to correct his trajectory to land on his feet if given enough time between when you lift your finger off the screen and when he hits the trampoline. If you release at a slight angle but early, don't panic-tap to adjust: let your character self-correct instead.

Tap your trick buttons as soon as you hit the trampoline and begin your jump. You want your character to begin tricks on the way up, completing rotation(s) near the beginning of his descent. Then you can release as his feet turn toward the ground, with plenty of air between him and the trampoline to correct and land safely. 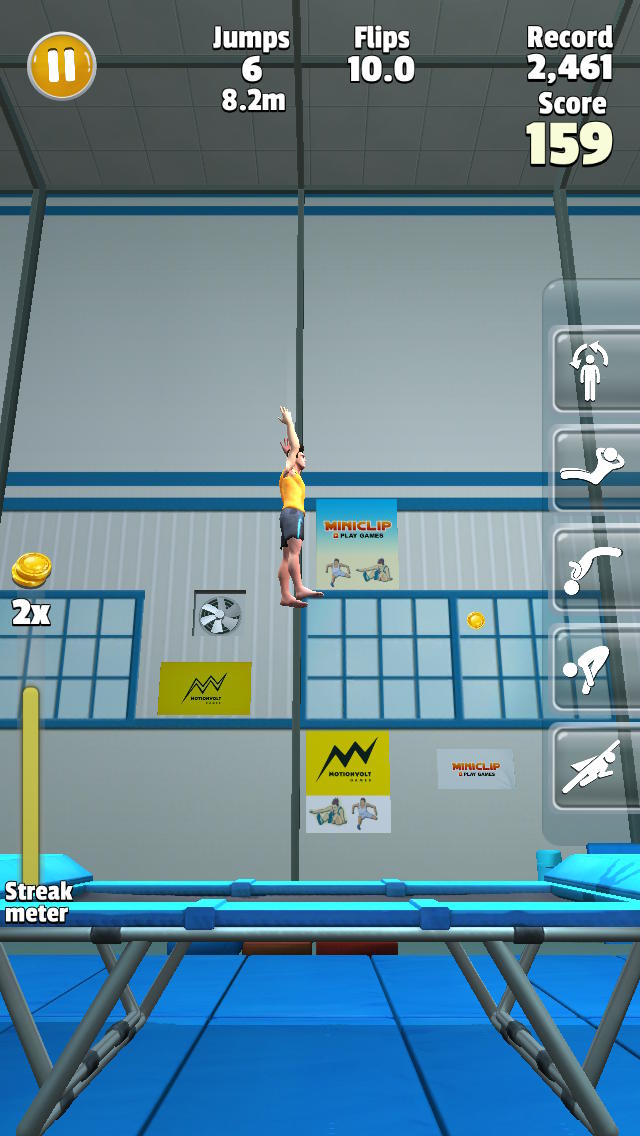 We usually aim to release no later than when he is one and a half body's length above the trampoline and often do so much sooner. Watch his feet while he turns and use stationary objects in the level to mark about when you want to release. For example: on the first stage, Backyard, we use the bottom of the house's roof line as our lowest release point. On the level Gym Trampoline, we wait until he gets to the blue Miniclip poster.

If you need to adjust your positioning quickly, use the standard flip—tapping the center of the screen—instead of a trick. The flip rotates much faster and tighter than any other trick, allowing you to make last-minute adjustments. You can move left or right while doing tricks: simply tap and hold the trick you want to do, then slide your finger left or right to adjust horizontally. As long as you don't lift your finger, he'll keep doing the same trick (you don't have to hold the button the whole time).