Pay the troll: Firm attempts to trademark the word 'Flappy'

A firm going by the name Ultimate Arcade, Inc. has launched an aggressive campaign to trademark the use of the word 'Flappy' in video games.

Going further than simple trademark protection, Ultimate Arcade has also sent out a flurry of trademark infringement notices to developers who've used the word 'Flappy' to ride the coattails of the late Flappy Bird.

In the notice, Ultimate Arcade claims that it is "the owner of the trademark FLAPPY™ for computer games" and has record of its usage dating back "at least" to 2006.

Reality, however, paints a different picture.

According to Trademarkia, UAI does not actually own the Flappy trademark as it claims and it only filed for the trademark on 16 February, at the height of the Flappy Bird clone rush.

Ultimate Arcade or UAI does not have any App Store titles of its own - although it notes that there are "more than 100 mobile prpperties [sic] offered in the App Store for sale and for free download" using Flappy and they "clearly manifest a scheme of deliberate and/or willful infringement of the UAI trademark."

Speaking to TechCrunch, Ale Moreno - the developer of Flappy Devil - confirmed that UAI requested his app be pulled from the App Store.

Following Moreno, several members of the Corona Labs forums claimed they received similar notices from UAI. At the crux of UAI's trademark claim is the flash-based game Flappy, a screenshot of which is below. 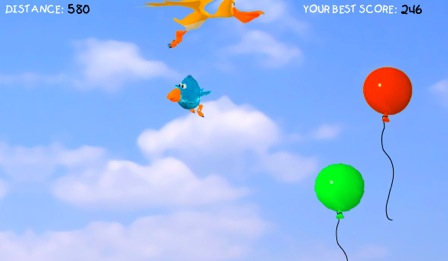 UAI's trademark campaign comes at a time when many within the industry are calling for patent law reform - and follows King's decision to withdraw its controversial patent on the word 'Candy' in the United States.