Five Nights at Freddy's, the Gold Award-winning horror game, is now available on iPad and iPhone

Will you last that long? Probs not 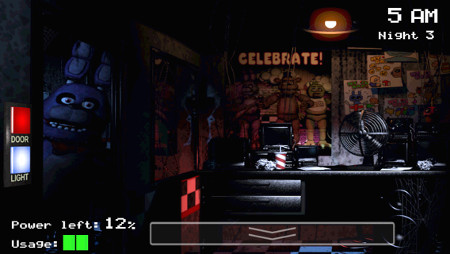 Robotic horror story Five Nights at Freddy's has skittered onto the App Store, meaning iOS gamers can scare themselves silly for just £1.99 / $2.99. Which isn't that much.

The game involves staying alive in a restaurant that's populated by murderous little robots. The only tools at your disposal are some doors, some lights, and some security cameras.

We've already reviewed the Android version, and we gave it a fat shiny Gold Award, calling it "a clever fright-fest that balances jump scares with knuckle-biting tension."

We went on to call Five Nights at Freddy's "a must-have for horror game aficionados."

And now you can get it on your iPad and iPhone. And you should do, because it's really, really good.

Fight Night's at Freddy's lore and the main story