This time round we're looking at Five Card Quest from RocketCat Games. It's already reviewed well here at PG, but what do the troops make of it? 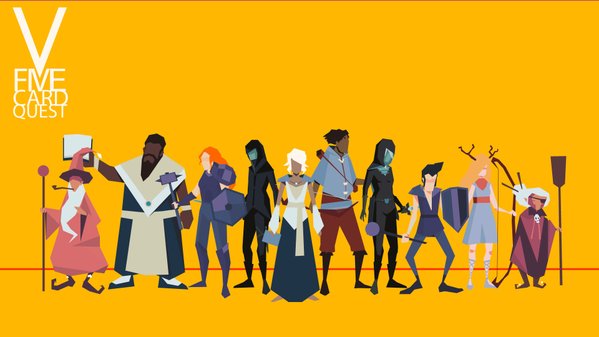 Let's get the ball rolling.

I'm a mage with an archer and so far it's interesting. The map isn't really exciting but it works and killing enemies feels good.

I'm just a bit worried that it might get repetitive.

The first thing that struck me is that I absolutely adore the art style of this game. It looks great and that was what initially drew me in.

However, when I was presented with the game map it felt a little jarring as it looks completely different to everything else.

You begin the game by selecting two heroes and these are the characters that you play the game with. I selected an archer and the mage.

When a battle begins your heroes and the enemies are presented on the screen in the same lovely art. From here you choose an attack from a selection of battle cards.

This is where one of my issues lies - all of the cards for all of your current heroes are just in one big line. I wish the UI was designed in such a way that allowed the player to select which hero they wish to use and then show the available cards.

The range of different attacks is nice but the audio when an attack lands is a bland, generic one.

To advance, you just press on a map tile which will unlock another adjacent tile that may have enemies or even another hero to rescue for your party.

After each battle you gain coins which can be spent at merchants found on different map tiles. From what I understand, hero health does not rejuvenate after a battle and I like this mechanic. It brings a good challenge.

I really enjoy strategy games but the fact that the battle mechanics are just 'alright' leaves me feeling a little underwhelmed. I will continue to play it, but I see this game becoming boring for me.

I agree that the UI takes a little getting used to, but I like the fact that the cards are colour coded to each character, so, in effect, they are telling you which card can be used by which character.

The cards cannot be sorted by character, but I don't see that as necessary.

I just found a water fountain. Now I could have got more health from it but I picked the perk that gives me more money dropped at the start of the game. 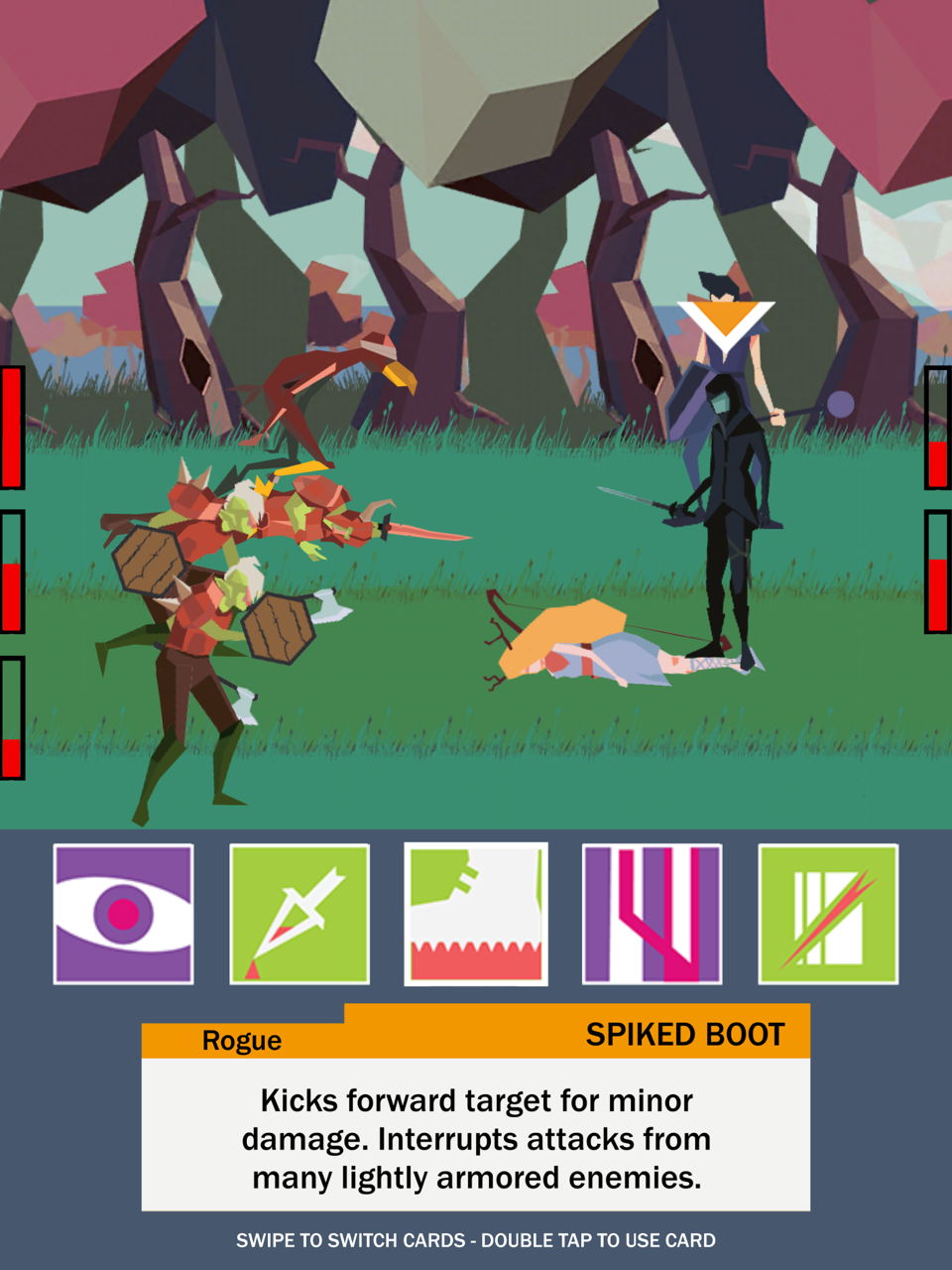 There are no instructions, but the game doesn't need them... it's very easy to figure out.

The art is charming and colourful. It's easy to see your enemies and your friends. It's simple and fun.

The gameplay is fast and furious. Play your card, the enemy takes its turn. Rinse and repeat.

It seems simple but the strategy involved is very deep. Do you want to do serious damage but take a hit, or do you want to block, hoping that you will get attacked and reflect the damage?

Adding perks and multiple character classes add to the replayability. This game will DEFINITELY be on your device for a while. I am not done with my first game yet and I am already planning how to handle my next playthrough.

Lots of fun here... I'm giving it two thumbs up.

The new update makes this game a little more fun. It really does speed up the gameplay, tweaks the graphics, and makes the game a little harder for some reason.

It's taking a while but I'm starting to get into this game. It definitely is a slow burn.

I wish it was better optimized for iPad play. Many of the items scale up too large and require scrolling which seems unnecessary. The game is a good fit for a quick gaming fix on your iPhone since it's turned based.

Well all I can say is that I'm still playing it and enjoying it. 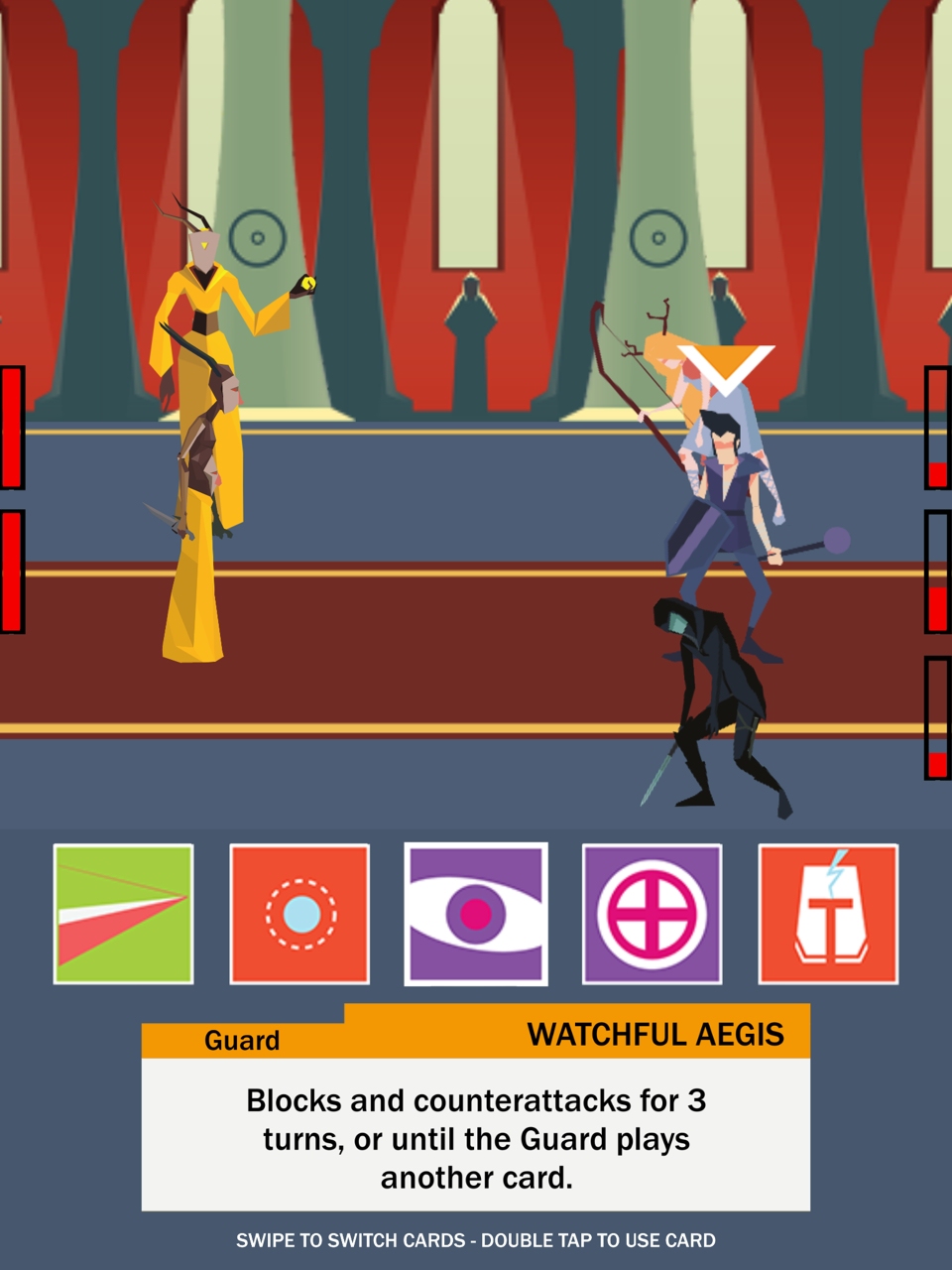 I really hope the final game comes with a tutorial or something. It's pretty confusing at first.

I agree. I haven't played a lot of card based games so I'm muddling through it myself. I think I got it down but an optional tutorial would be nice.

It took me ages to figure out how how the lane system worked. I still don't get how damage is calculated when dealt to lanes you're not in.

There's nothing to work out here. It all explains itself as you go along.

I'd agree that the cards are all self explanatory, but the lanes and even the attack order aren't really explained.

I worked out the attack tells of the creatures and the three different stages of their melee attack.

As Andrew said, the artwork is gorgeous but the map screen is jarringly basic and ugly. It wouldn't be out of place on a C64.

The game is very stingy on health. Unless you get the health perk you can wind up very low on health after a battle with no way to recover before the next one.

This can lead to you entering a fight knowing you don't have a chance of winning and having to grind out a loss to start again.

I haven't played enough games to notice if anything carries over from one game to the next. 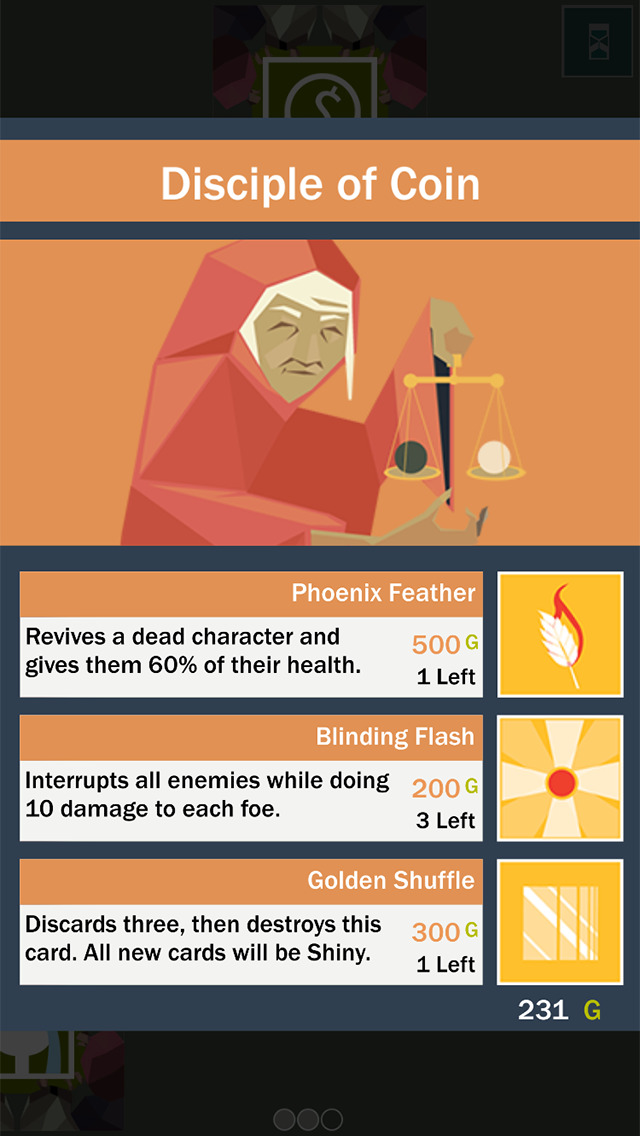 This game is decent. I like the art style and and I like the feel. It can be confusing but when you get the hang of it, it can be fun.

I like the roguelike style of it and how you can choose a different team and different bonus, which changes the game.

I can't stop going back to this game. I keep getting to the next stage but no farther. I keep saying no more but then I see my fingers playing on before me.

Another quick comment. I wish it had cloud sync so I could play the same game on my iPhone and iPad.

Its progression is very good. You do get a little further each new game.

I'm trying so hard to like this game but it's feeling more like a chore than anything. There's nothing that makes me want to come back to it and normally I love RocketCat stuff.

The art style is kinda cool, but I think perhaps I'm just too simple for such an impenetrable game. 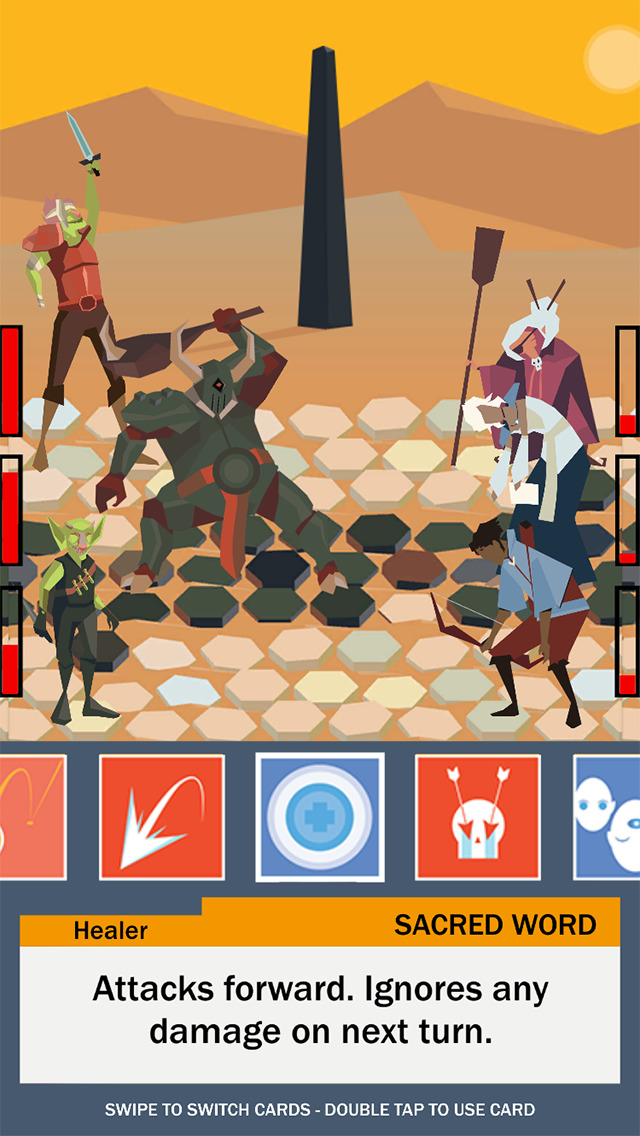 I don't have much experience playing deck building games but I was interested in this game because it was made by RocketCat.

Opening up the game I was impressed by the artwork and music, but was equally confused by the gameplay. There isn't much in regards of a tutorial.

The basic concepts are straightforward but a lot of the cards and the lane system are confusing. Thankfully, as I progress I'm starting to pick up the strategy, which makes me want to keep progressing.

The game is labelled as a RPG but unfortunately there's almost no story. The artwork is also a bit uneven because the characters and battle scenes look great, whilst the rest of the game is bland.

I also wish it supported cloud syncing. I wish I could continue the same game between my iPad and iPhone.

I was really excited to play this after watching the trailer, however the experience was distinctly lacking.

Firstly, the lack of any sort of tutorial to guide you into the game leaves you disoriented and jabbing away at the screen to try and figure out the rules and what you should be doing.

The art style is nice but it's hard to appreciate when all of your time is taken up puzzling over what on earth is going on. The lack of any sort of storyline is jarring, too.

Unfortunately the control scheme doesn't do much to quell these issues, forcing the player to scroll through spells and read each one, then double tapping to play them. It really highlights how well similar games do with their control scheme, e.g. Hearthstone.

It takes a lot of trial and error to figure out the mechanics. The cards are all dull-looking symbols - some appear to be greyed out, seemingly at random.

For a game to be this inaccessible to new players means that it will never hit the dizzying heights of other TCGs.

It may not have enough to topple Blizzard's behemoth, but it seems as though there's still a lot to like about RocketCat's latest. Have you played it for yourself? Do you agree with the troops? Let us know in the comments! If you'd like to join our App Army yourself, then have a gander at our sign-up page.
Next Up :
Noah's Heart first impressions preview - "Puts the 'massive' in 'MMORPG'"