iOS
| Final Fantasy All the Bravest

Square Enix has just launched a manic screen-tapping RPG thingy called Final Fantasy: All the Bravest on the App Store. And - shock horror - it's filled to bursting point with crazy in-app purchases.

All the Bravest often feels like its a freemium app, but it actually comes with a steep one-off cost to download.

The game features 25 basic party members that you unlock as you work through the campaign. But, there are a further 35 "premium characters" that you can only get from the in-game shop. 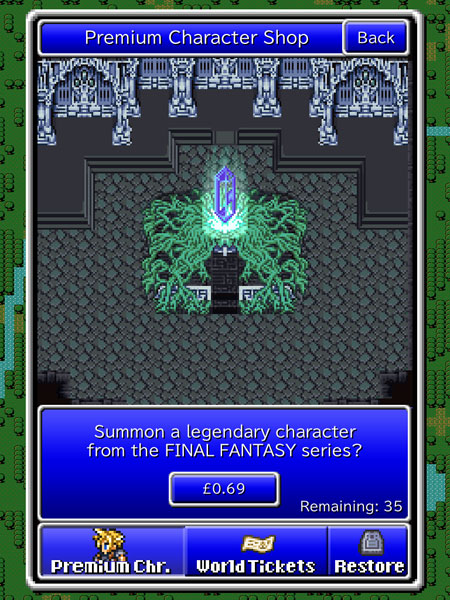 Bear in mind that the hero you receive is completely random. So, if you really want to take Cloud from Final Fantasy VII into battle, you'll just need to put in your iTunes password and hope for the best.

There are also "World Tickets" - these let you gain access to new world maps.

Finally, there are IAPs in the battles themselves.

In All the Bravest, you'll go through characters like Tic Tacs. One hit from an enemy and your Warrior or Black Mage will be eradicated from the battlefield.

Your heroes come back by themselves, but they each take three real-world minutes to respawn. If your whole 16-person party is wiped out, you'll have to wait 48 minutes to get everyone back in the fight.

If you don't want to wait, you'll have to pay (a mantra that can sadly describe a lot of mobile games these days). You can revive your whole party immediately with a golden hourglass. 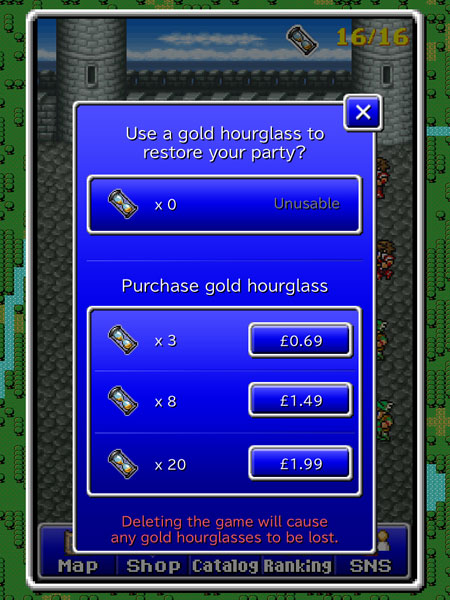 So, there we have it. Randomised characters at 69p a pop, instant revival for as long as your bank balance stays above zero, and £7.50 of DLC on the first day of release. Sounds like a ball, right?

Square Enix has a history of including in-app purchases that make your jaw drop and your wallet brace itself for impact.

It offered £100 of extra songs in Theatrhythm, charged £30 to get the full Demons' Score experience, and locked Final Fantasy Dimensions's chiptune soundtrack behind a £5 paywall.