Feud is an accessible, streamlined chess-like available for free on iOS and Android

Sometimes a strategy game comes along and its rules are so distilled and approachable that it feels like you've played it before. Feud, from Bearwaves, does just that.

Feud places players in the role of a king on a simple, 4x4 board. Your pieces include archers, knights, a wizard, a healer, a shield and a king. Each of these have their own attack and move rules, but most importantly the game also has some simple capture and kill mechanics. For a start, isolated tiles cannot be moved, the king is the target of the combat, and 'movement' is based on flipping places. 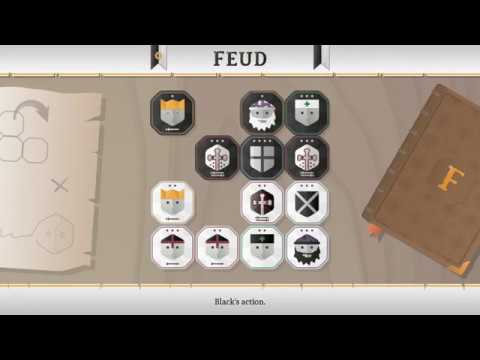 Each turn is two actions, a movement and an activation, but with a 'frontline' which are already adjacent from the first turn, this means that there's potential for any unit to get right into action within the first round.

It's all exceptionally intuitive, and that combined with the clear artwork makes for a game which is very approachable and (despite only 16 pieces being on the board at the start of the game) full of tactical options.

The reason behind the fluid nature of the game, and the incredible balance, is due to Feud's origin as a physical board game. Designer David Cordell originally released the board game back in late 2016, before approaching and then joining up with Bearwaves to bring the game to mobile platforms.

I've played a good few hours of Feud already, as I found the demo while rattling around the darkest reaches of the internet. I should think that it is pretty clear from what I've written that I am quite impressed with the general feel of the game, it feels like a game which was lost through the decades rather than some new twist on a genre. It is both simultaneously more approachable than chess, and also more immediate in its options.

Feud is available now on the App Store and Google Play Store. It's free; the best price.

Looking for the latest news? We have a section for that.
Next Up :
Jigsaw Puzzle: Belgium Through The Lens lets players journey through Belgium via jigsaw puzzles, out now on Android