On a cold Bristolian winter evening under the cover of darkness, I met up with Tomas Rawlings of Auroch Digital, the company behind the ambitious gamification project Game The News.

The latest Game The News title from the seven-man Bristol-based studio, Endgame: Syria, had just been rejected from the App Store for contravening one of Apple's App Store policies.

More specifically, Apple deemed Endgame: Syria to be in violation of the App Store policy that prohibits the sale of games in which enemies "solely target a specific race, culture, a real government or corporation, or any other real entity".

I spoke with Tomas about the status of the Game The News project; the unique ethical quandaries raised by the subjects his games cover; inspirations for the project; and his stance on the App Store's terms and conditions. 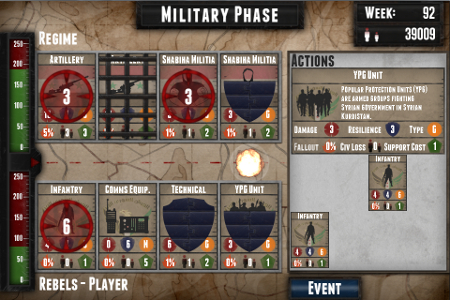 Pocket Gamer: For those that might not know, what are the Game The News titles about?

Tomas Rawlings: In summary, they're about real-world events, about news, current affairs. The other thing that's really important about the games we make is that they're made very quickly.

The more time you've got to do something, the deeper you can get into the subject, the more reflection you can give it. Ultimately, though, it becomes less timely, less relevant to people's lives.

Even if we doubled the time we spend [working on a game] and extended it to a month, that's still much less than the average developer takes over a game. I think that's important.

Are you aiming for tabloid-style journalism in your work or are you trying to do The New Yorker pieces?

I wouldn't say tabloid, no. We're not throwaway or sensational. Saying that, we can often take a jokey stance.

We whipped up a game in record time about cotton picking in Uzbekistan, for example, and the whole game is basically a joke. It's there to show how monotonous something is. We deliberately made a very boring game.

Actually, I'd say that's our main aim. We make these sort of short playable experiences that are going to make you think, or smile, or laugh.

If we're not delivering a fresh perspective on current events, though, there's no point in our doing it. So, we have to let the interactivity in our games say or mean something that other forms of news reporting couldn't get across. 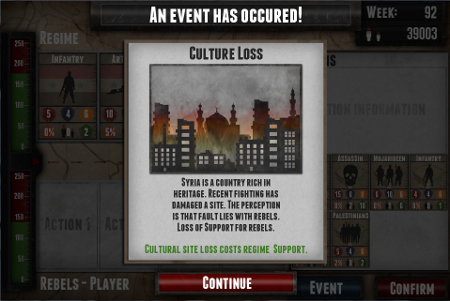 We like to think that news reporting is generally unbiased, but are you trying to get across a particular viewpoint with each game?

I think there's a whole other discussion around biased news. We're not "unbiased", no. Mainly because I think everybody is prejudiced to some extent. It's only fair to be transparent about these things, I think.

In the case of Endgame: Syria, the easy way to approach that without bias, so to speak, is to pick the side you want to represent and go from there. But, actually, upon doing the research I found myself very uncomfortable representing both sides in it.

I could cover both sides, but it'd be so light. What's the point in doing it? I'd rather we covered one side - which we did with the Syria game - and then be a bit more nuanced with it. Again, it's that balance between depth and speed of coverage.

I'm unapologetic about that. A website called Arabic Gamers, who obviously had a regional interest in what we were tackling here, asked these same questions of bias.

Unashamedly, it's difficult not to be inspired by what a lot of Syrians have done protesting in the face of armed people. So, that naturally pushes you towards one point of view, if you like. And, you know, I'm a games designer; not a reporter.

We've started work on two more games, by the way. One on the war on drugs and one on climate change. In both cases, we're talking to experts in those fields, who are helping to shape the content. Just like in that cotton picking title mentioned above. 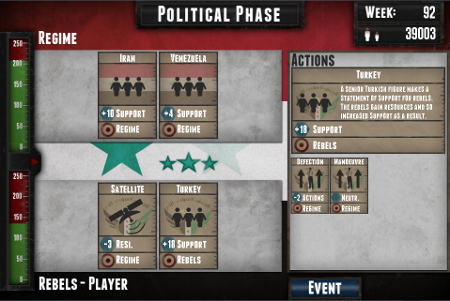 People want news content nowadays for free. How are you going to be able to 'monetise' news - and, therefore, stay in business - in a way that's morally acceptable to you as a creative team?

In many ways, it would be easy for us to say, 'Oh, let's do some Angry Birds clones'. But, it's creatively unsatisfying.

So, we are looking at advertising. And there's a number of options in this field that are open to us.

For instance, we could look for crowdfunding to cover a specific story, especially if it's a story that wouldn't otherwise be covered in the mainstream press. Say, like the war in the Congo. We could use our form to shine a spotlight on a really troubled area like this.

Or we could work with specific organisations. I admit, I have no problem accepting support - whether that's logistical or financial. Provided we're transparent about that support. At all times.

But, I don't deny it's a difficult area, and I wouldn't pretend we have any easy answers.

How do life experiences and past projects affect your gamification of the news?

There was a game I played as a kid, Theatre Europe, where you had to hold off a USSR attack by controlling NATO forces. In the game, you had access to nukes and had the option for a total nuclear strike.

If you selected that option, you had to ring a real-life phone number to get the password to authorise the strike. The recorded message gave you the code, 'Midnight Sun'. You typed it in and the nukes were deployed. Before too long, you realised that you'd destroyed the world. The entire world.

That game taught me one very valuable lesson: nobody wins a nuclear war; we all lose. 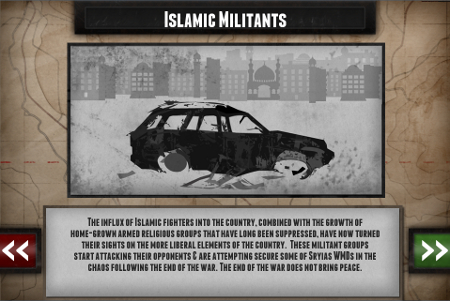 In your opinion, is the App Store ecosystem too "closed"? Is Apple too heavy-handed when it comes to approving games? Do you think Android's perceived openness will prove the 'right' way in the long run?

From the outside, the App Store approval process can seem a little arbitrary. There's a number of games that have been rejected for reasons that we cannot fathom.

I'm sympathetic to the fact that it is a hard job overall, though. After all, the App Store approval team must receive around 300 app submissions per day.

Google, by contrast, seems to have moved to a post-moderation model. After we submit games on that channel, they are live almost instantly. That makes our development time much easier to manage.

I think in a networked age where more and more content is going to get submitted, Google's approach is more viable long term.