Coming to Dissidia Final Fantasy Opera Omnia is Cor Leonis, Marshal of the Crownsguard from Final Fantasy XV. Also known as The Immortal, the global-first character will be available for a limited time with tons of cool in-game goodies, new content, and special rewards for players of Square Enix’s popular RPG.

Dissidia Final Fantasy Opera Omnia players will be able to obtain Cor Leonis from now until August 10th in the limited-time event called “The Man Known as The Immortal”. Aside from the character himself, his 5-star armor “Cor’s Fatigues (XV)” and his 5-star weapon “Onikiri (XV)” will also be available for players to acquire for free by simply participating in the event.

To celebrate his arrival, the game will also feature a Multi-Draw event that lets players perform their first multi-draw for free on Cor’s banner. Cor’s EX weapon “Kotetsu (XV)” with EX ability “Lion’s Roar” will also be available here along with his LD weapon “Honebami (XV)” with LD ability “Reflorescere”. A Limited-Time Costume Bundle for Cor will be available to purchase as well. 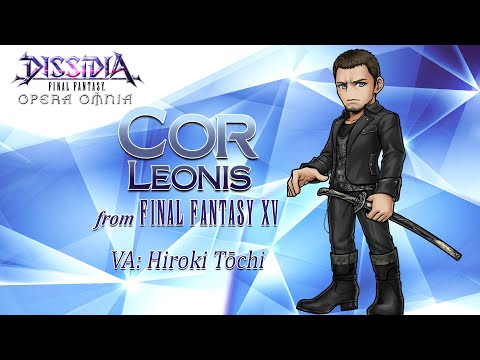 Ready to see Cor join the roster of characters in the game along with Cloud, Vanille, Penelo, Vivi, and so much more? If you’re eager to play Cor in this exciting mash-up of Final Fantasy legends (for both heroes and villains alike), you can download Dissidia Final Fantasy Opera Omnia on the App Store and on Google Play. It’s a free-to-play game with in-app purchases.

You can also visit the official website to know more about the game, join the community of followers on Facebook, or take a look at the embedded gameplay trailer above to see Cor in action.

Want to play more RPG awesomeness on your mobile device? Check out our list of the top 25 best RPGs for iPhone and iPad (iOS)!