For most of us, the thought of our parents owning a smartphone fills us with cold dread. As soon as the purchase is made, we know that we're in for late-night support calls on where to find Google.

Serenity Aleister, the protagonist of Square Enix's latest rhythm game Demons' Score, has a different problem when her father begins playing with a smartphone.

In a moment of truly staggering technical incompetence, he opens a gateway to hell, thereby lumbering her with the job of preventing the apocalypse.

So Serenity strips down to her most garish underwear, grabs a bright pink machine gun, and goes flying off to save the world.

Symphony for the Devil

Set in stark contrast to Theatrhythm, Square Enix's adorable love letter to the music of the Final Fantasy franchise, Demons' Score is dark and gritty from the outset and shows more skin than you'd expect to see in a burlesque show.

The events of Demons' Score unfold in an abandoned mental hospital located in a Lovecraftian suburb of Boston. The hospital, characters, and animations are all gorgeously rendered in the Unreal Engine, which creates a beautiful - if foreboding - backdrop for the music game that follows.

The gameplay itself is quite simple: in each level you have to tap, swipe, and trace in time with the music in order to fight the demons that haunt the abandoned asylum.

As in Elite Beat Agents, your timing on hitting triggers determines the damage that you do to the enemies. If you tap too late, or miss entirely, you take damage. Tap perfectly in time with the music and you'll recover a bit of health.

Despite the limited nature of rhythm game inputs, Demons' Score keeps things feeling fresh with multi-inputs that you can only hit using two fingers (and hands), along with some moving targets to up the challenge.

Each fight in the game feels dynamic and energetic from start to finish. While the confusing plot and sub-par voice acting of Demons' Score rarely add any urgency to the battle scenes, the music and dazzling graphics make every fight feel epic.

Each stage culminates in a very dramatic - and sometimes comedic - fight with a demonic boss, each with its own musical theme and style.

In the course of the game, you'll confront a funk-loving behemoth, a serpentine samurai, an ambulatory iron maiden that belongs in a Tim Burton film, and a hideously corpulent fly monster masquerading as a Japanese pop idol.

After you defeat each boss, you'll be able to summon them from your cell phone (the actual Demons' Score) to help you on subsequent levels. Doing so changes your character's appearance, but also gives you the abilities and strength of each defeated demon.

Unfortunately, not all bosses are encountered in a single play through. You'll need to play the game on Easy mode, then replay those levels and two additional levels on Normal mode, and then repeat the process a third time on Hard mode to experience all of the boss fights.

Music at a price

Each boss fought and summoned in Demons' Score comes with its own signature song that recalls the overall design of the character in question.

With some of Japan's top video game composers - like Naoshi Mizuta (Final Fantasy XI), Keiichi Okabe (Nier), and Hiroki Kikuta (Secret of Mana) - all contributing to the soundtrack, there will certainly be a song for everyone to enjoy.

With ten bosses in addition to Asmodeus, the cost for the game and all of its content sneaks up to close to £20/$32.

As a final salute to in-app purchases, Square Enix includes the option to purchase an additional 'Satan' difficulty mode for £6.99/$9.99.

Ultimately, the notion of value is different for everybody. While some of you are probably still glancing at the last paragraph to make sure you read it correctly, there are others who won't be able to see what all the fuss is about.

You can play through the game using only the stock Serenity and Asmodeus models, but to truly experience some variety in the levels and background music (which is tied to the character/demon you're using) you'll need to spend a bit on in-app purchases.

To Square Enix's credit, each demon character looks fantastic and the added songs are excellent, but the price for the full game is difficult to justify for the admittedly polished, if slightly repetitive, gameplay. 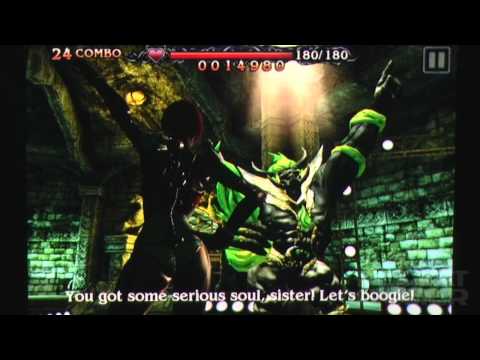 A gorgeous, fast-paced rhythm game that feels a bit samey if you don't shell out a lot of money
Next Up :
REDMAGIC 8 Pro review - "A beast in performance, but not without growing pains"