Deathwatch: Tyranid Invasion may run hot, but the game itself is even hotter

Each week, we ask members of our App Army and ask for their feedback on the latest and greatest releases on mobile. One top pick this week was Rodeo Games's turn-based strategy game set in the Warhammer 40,000 universe, Deathwatch: Tryanid Invasion.

I'm finding this very similar to X-COM and I love it. The turn-based play makes me feel all warm and fuzzy inside. We have a good one here.

I just finished the Prologue and I'm really enjoying Deathwatch so far! Combat is indeed similar to X-COM, even giving you the ability to set your units on overwatch.

Also, for any of you who liked Warhammer Quest, it's similar to that only now you're in the 40K universe. Many of the mechanics are much better than Warhammer Quest, so chances are you will like this much more.

First impressions are quite favourable so far. Reminds me a lot of Hunters. Typical Games Workshop presentation - slick and well-produced.

The voice acting is a nice touch and although I've just started playing, seems to be quite deep in terms of customisation and managing your marines. So far so good.

I can tell you exactly what that warm, fuzzy feeling is Kainen: it's the calling of the Emperor! No, in reality I think it's the coolness factor from the Space Marines you're slowly absorbing.

From the way they talk to the way to the way some of them survive bullets to the head with the scar to prove it... it's all just awesome!

I just finished Act 1. Surprised I didn't take any damage in the final level of that act. The Tyranids were starting to swarm in large numbers there towards the end; was starting to break a sweat.

I like the hold out and defend missions because you need to strategise with good positioning for field of view and Overwatch activation. Makes you learn how to efficiently use your AP.

Is it just me or does this game eat up your iPad's battery life rather quickly? 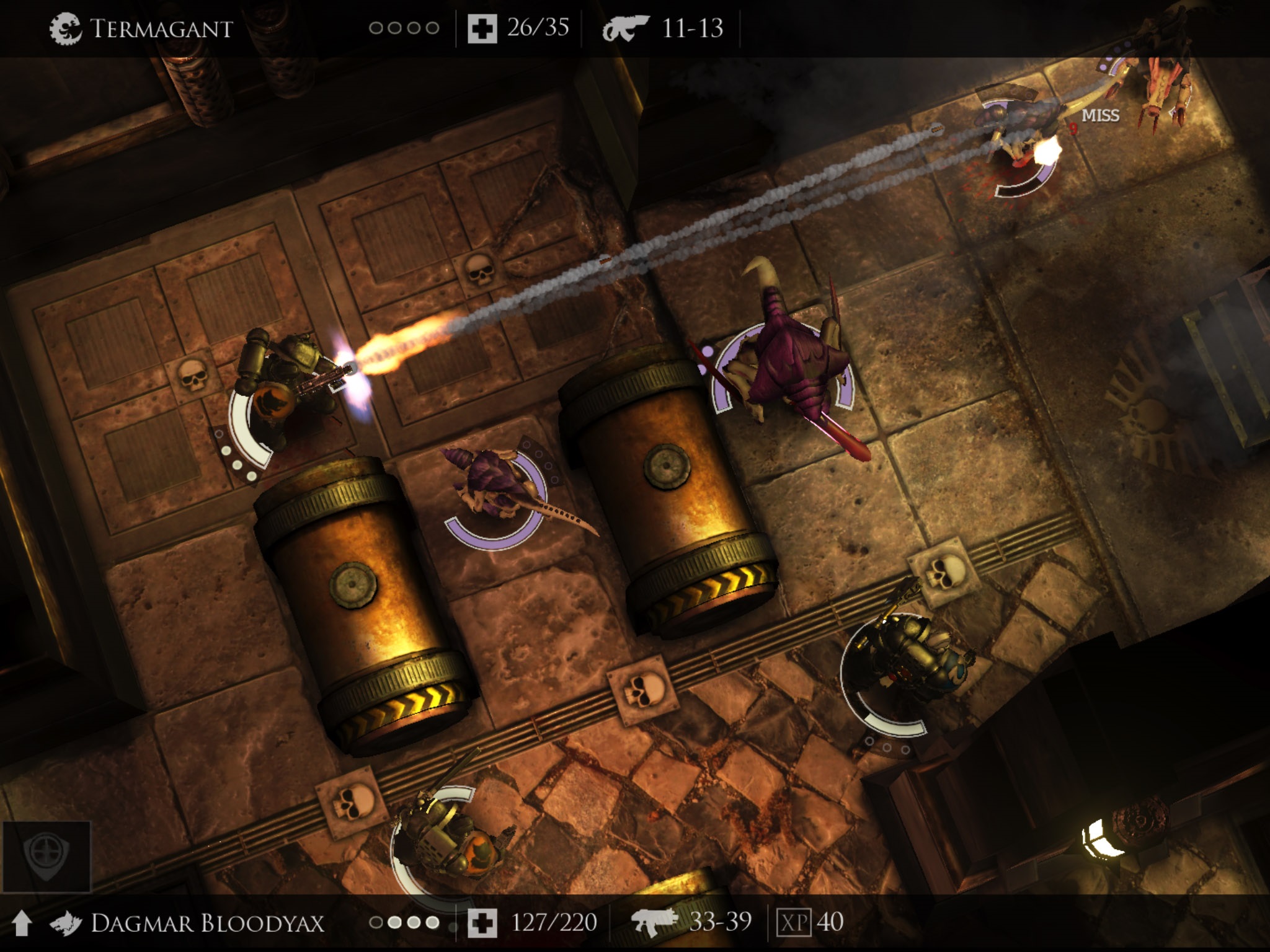 It's not just you. My iPhone is overheating too... not great with the intense heat at the moment!

Yeah, it's making my iPad run hot too. Enjoying the game otherwise though!

I love these games that push the hardware and generate lots of heat. Keeps your hands warm in Winter.

I've been so excited about Deathwatch. From what you guys are saying it sounds just like Hunters 2, which is a really excellent game!

Hunters 2 was basically a Space Hulk game, but the devs didn't get a license from Games Workshop. Instead they got the license afterwards and made Warhammer Quest. Now it looks like they've returned to Space Hulk to make that with the proper license!

I just unpacked this bad boy from a card pack.

I don't know why, but I haven't been drawn in by Deathwatch so much. I don't know if it's genre or something else, but I just couldn't play it for long time like I can with X-COM. It looks fantastic thanks to the Unreal Engine though.

This is definitely one of those "Marmite" games - you'll either love it or hate it. I absolutely love it. I've been playing all morning (or at least trying to - damn work!).

It feels like this is the game that Hunters 2 was trying to be. Everything about it is slick and accessible. It has an easy to understand control method, intuitive gameplay, and it looks gorgeous.

It has IAPs in the form of purchasing card packs, ranging in cost from £2.29 to £27.99. However, there's also an option to buy packs with currency earned in game which is really great to see.

For a diehard Warhammer 40K fan Deathwatch knocks it out of the park, assuming you like AP turn-based combat games. It may not be quite as exciting for those unfamiliar with the lore though.

I like how the card system has been implemented. Just opened my first free pack after completing the tutorial levels and got a T4 item (the highest level for loot).

Very nice weapons there chanandler! I tend not to use plasma weapons because of their negative effect. That said, if it's a tier IV weapon I'll happily throw that mindset out the window.

Thanks GGod Hand - I was lucky there! Even the rocket launcher is pretty sweet.

The Codex is a really great touch. Being able to see what is available to collect and how much of that you acquired so far is pretty cool.

Uh-oh... I lost a Marine or two at the end of Act 4. Glad this is starting to get tough!

Only one of my marines has fallen so far, but that's because I killed him myself with my flamethrower when trying out the Black Rage ability, firing at everyone in range!

I burned one of my teammates too, but thankfully he survived. The flamethrower is my favourite weapon so far!

Uh-oh... I ran into a bug that keeps crashing my game on Act 4, Part 1. I was almost done with the level but one of my Assault Marines was on Overwatch and every time he killed a Tyranid running towards him the game crashed.

I was forced to abort mission, so my team's entire saved EXP got reset to 0. Bah!

This keeps resetting my EXP - eek!

I'm afraid to say I haven't been gripped by this. Deathwatch is a slightly bland turn-based strategy game. It has its moments but nothing is making me want to play more.


While it may seem like I'm being a bit brutal there are many, many better games in the TBS genre. I fear this may only be for the diehard Warhammer fans.

With great gameplay and graphics comes looong loading times. But it's worth it. So, so worth it.

I'm a big fan of the Warhammer universe, so I had to play Deathwatch. I'm glad to say that I'm more than happy with it!

Although the atmosphere a bit too placid at times, the graphical fidelity and fluidity of the game is truly magical.

Yes, the game takes ages to load, consumes a lot of battery, and overheats your device, but this masterfully blends the Warhammer universe with a straightforward strategy game.

I'm pretty sure it's a long load time on that as well. iPhone 6 should handle it no problem.

Yes that's a long time, chanandler. I think we're about the same, but that does make me worry for anyone with an older iPhone.

Yeah, it killed my battery too. 30 minutes play equated to about 50% battery.

I'm not experiencing these long load times. I'm on iPad mini retina. The only long load time is when I start up the game, and even then it's not too long. It does drain my battery rather quickly, but I can play for a few hours. Battery runs hot every time though.

I think the devs really need to add a fast forward button. It's not the device lagging or anything, it's just literally the enemies moving around on their turn.

Something similar to what Final Fantasy Tactics did - a faster combat option - would be a lot more convenient for those of us who play at a faster rate.

Also, upgrading would be a bit more convenient if all your Marines' EXP showed in the "Space Marines" menu without having to click on each Marine individually. 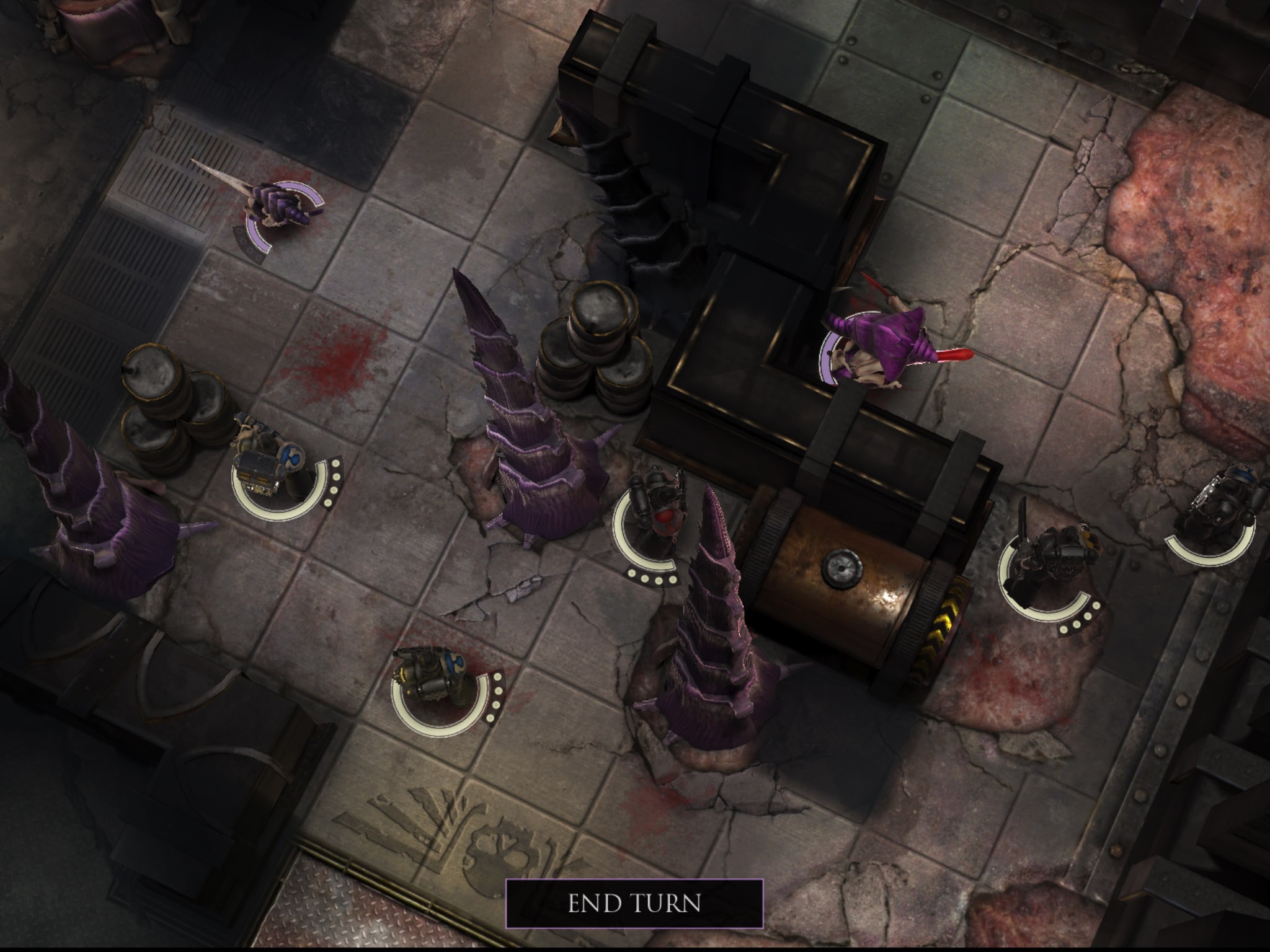 My biggest gripe is the lack of fast-forward or skip options too. There's also a two-second delay before and after the enemy moves when there are tons of enemies on the screen.

I usually just play my turn then put it down and watch TV while the CPU moves.

I'm finding that the enemy takes their turn and then the game just sits there like it's doing some really deep thinking.

Warhammer to me is something that my dad played when I was a kid, so I've got no experience with the franchise whatsoever.

This is essentially a really engaging turn-based RPG. I often find some strategy games are too difficult, but Deathwatch has the balance just right.

The graphics are incredible and the game plays out very smoothly. I really enjoyed the variety of missions available, whether it's defending a particular location, trying to reach another location, or just simply surviving waves of enemies!

It's a brilliant game that I'm really enjoying, but I think with a few tweaks it could be even better. For example, having the ability to replay the tutorial levels and check each weapon's strengths and weaknesses would have helped me a lot.

The cards you are given for completing missions are a great addition, as is being able to use the EXP to level up your players. You can use IAPs to build a better team by buying cards, but as it's not necessary it makes the IAPs unobtrusive. 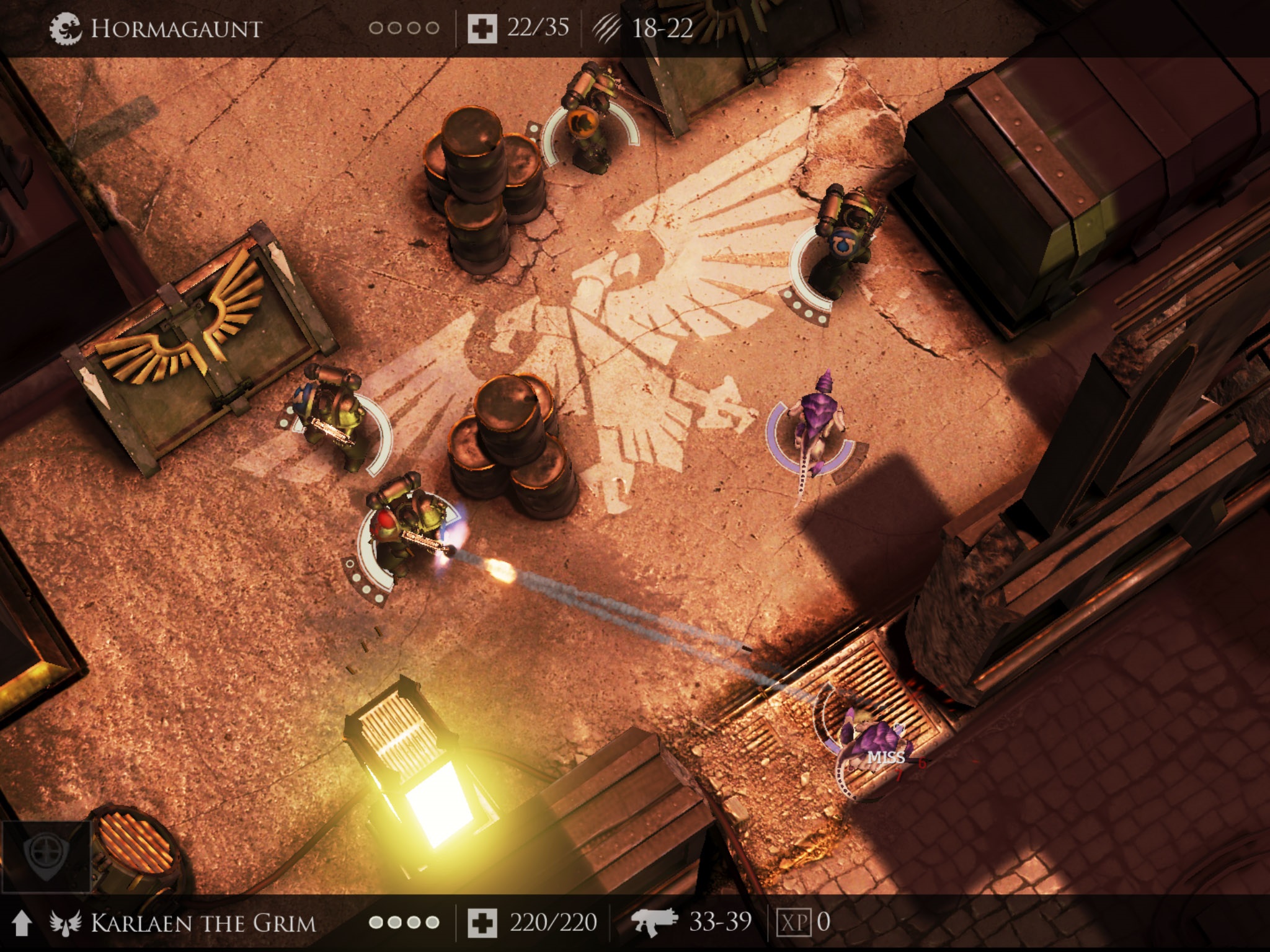 I agree with girlygeekgamer about the IAPs - with no adverts and no paywall you can play as much as you want without having to get the wallet out again.

The difficulty level is quite high but I'm finding that just by replaying earlier levels a few extra times you can level up your Marines quite quickly, helping to make the later levels easier.

This is a really great game and a real treat for anyone who loves Warhammer 40K.

I've never played a Warhammer game before, but I'm thoroughly enjoying Deathwatch. Everything looks fantastic and it feels like it was designed to be a mobile game. I love the combat system too, which I didn't expect.

The long loading times are quite bothersome though. It takes my iPad 4 a minute to start up, which often prevents me from getting into it. A single battle can take quite a while too since you can't fast forward or skip enemy turns.

If you're into strategy games, and ready to put some time in it, Deathwatch could very well be the game for you.

The Emperor has blessed diehard Warhammer 40K fans with a game worthy of its name and license. Deathwatch is a turn-based strategy that requires a certain level of patience and planning that will please any veteran of the genre.

The game starts with a sufficient tutorial and progresses linearly. Levelling up your squad of five; collecting more powerful Marines, weapons, and gear through card packs - it's all very pleasing.

This is the successor of Warhammer Quest and it does everything better! 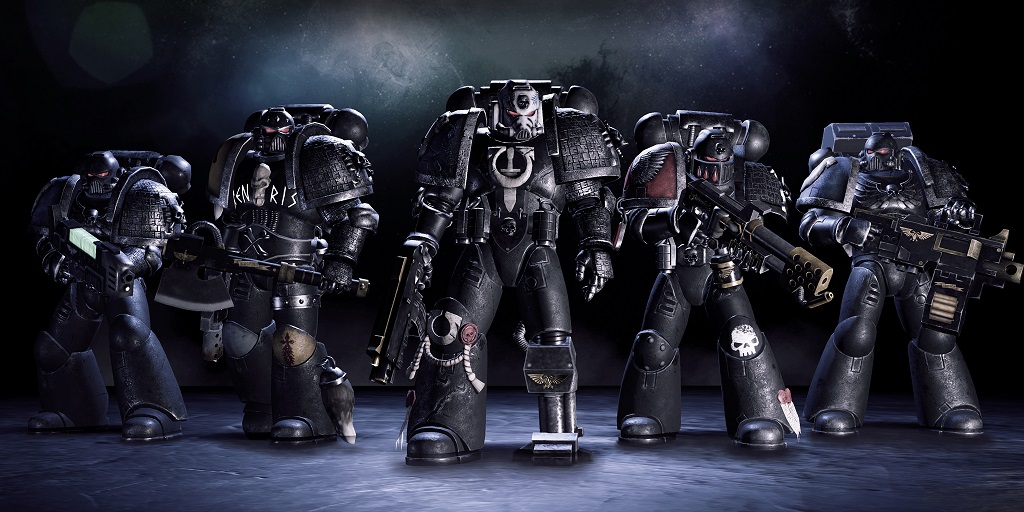 The App Army have spoken! If you'd like to sign up, please have a gander at our App Army application article. Did you pick up Deathwatch: Tyranid Invasion? What do you think of it? Let us know in the comments below!
Next Up :
Figure Fantasy: What to expect from the epic Ultraman Tiga collab