First impressions of Death Dome on iOS and Android

When we caught sight of Death Dome's over-the-shoulder one-on-one fighting style and cel-shaded visuals last week, we said it looked like a mash-up of Infinity Blade and Borderlands.

Having played Griptonite's mutant-ridden battler for 25 minutes or so, we can now confirm that it is DEFINITELY a mash-up of Infinity Blade and Borderlands.

In fact, it's fair to say that Death Dome's gameplay is almost entirely influenced by Chair's hack 'n' slash success story - albeit with a change of setting and an emphasis on entrail-spilling finishers. 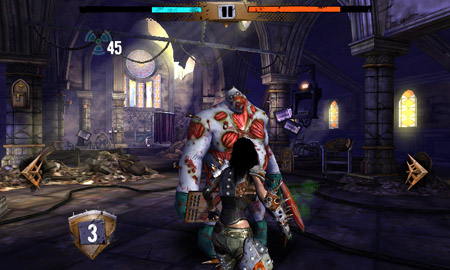 As in Infinity Blade, you face off against a series of oversized opponents (who on this occasion are called Behemoths). Swiping the screen triggers melee attack and parrys, while tapping arrows positioned to the left and right of the display lets you dodge incoming strikes.

If you have had any experience whatsoever with the Infinity Blade series, you'll be able to ignore Death Dome's tutorial altogether and dive straight into the action - it's that familiar.

There are some subtle differences, of course. Rather than simply identifying and collecting loots with a single tap, you have to tap three times on question marks that are highlighted on the battlefield.

By completing these mini-QTEs, you earn bonus cash (skulls, in this case), which you can then spend on weapons, armour, and modifiers. 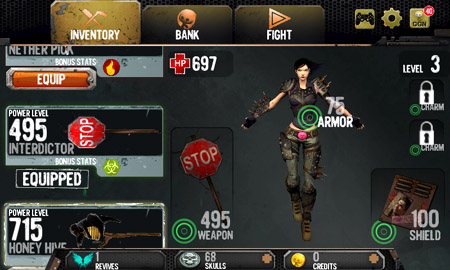 When it comes to the environment and visuals, however, there's more than a trace of Gearbox's loot 'n' shooter in Death Dome's mutated DNA. That's not necessarily a criticism - Borderlands looks fab, after all - but it's impossible to ignore.

Death Dome is a freemium title, so there are plenty of IAPs available that will let you acquire more skulls and expedite your progress if you're into that sort of thing.

Though Death Dome may be lacking in the originality stakes, first impressions suggest it's a pretty slick experience nonetheless. It's available to download on iOS and Android now.

How to defeat the Behemoths: Death Dome hints, tips, and tricks