Assuming it's funded on Kickstarter, that is

We know, we know - it's 2014, and Kickstarter campaigns for games have to be pretty darn special to get us fickle gamers excited anymore.

Luckily, Darkest Dungeon looks like the perfect game to be excited about.

Also, it's not a game where you just have to worry about your characters' hit points. Taking a cue from H.P. Lovecraft, your characters' sanity will also be tested as they delve through the shadowy depths of Darkest Dungeon.

Intriguingly, no two characters will see their minds shatter in the exact same way.

A dead, rotting corpse might unsettle a less seasoned fighter - but it'll wind up strengthening the resolve of a Crusader. Conversely, a character might develop a phobia of undead and become less effective against, say, skeletons and ghouls if they take a wallop from an undead enemy. 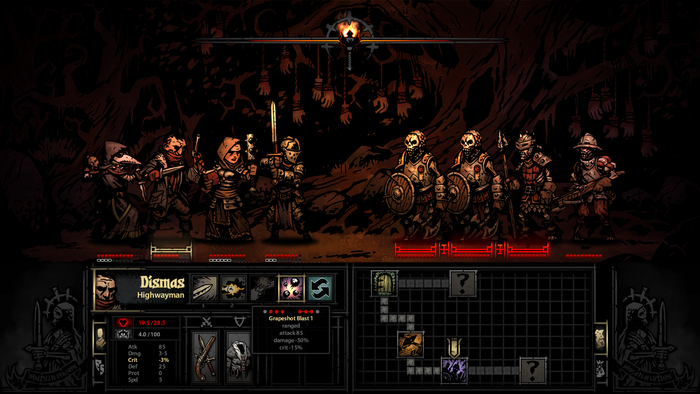 Despite its firm grounding in old school roguelike gameplay, Darkest Dungeon also features 'modern' RPG touches like AoEs, DoTs, and HoTs - that's Area of Effect, Damage over Time, and Healing over Time for those who don't speak MMO - making it accessible to a wide audience of players.

The only downside we have to report is we have no idea what platforms Darkest Dungeon will wind up on. Currently, the Kickstarter is for Windows and Mac only - although the campaign notes it might add tablets and 3DS support based on backer interest.

If any of this has caught your interest, you can head over to the Kickstarter page and make a pledge.