PGC London 2016: Dark Future: Blood Red States is what happens when a driving game crashes into an RTS

But Auroch Digital wants to push them together into a snuggly menage a deux in Dark Future: Blood Red States.

Rather than flat out action, the game plays out like a sort of RTS. When you're confronted by enemies time slows down, giving you time to choose the actions you want to take. 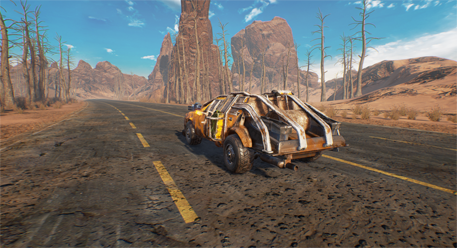 It runs on Unreal Engine 4, and the screenshots look pretty impressive. The license it's based on owes a lot to Mad Max.

There are super-charged cars, massive dangerous highways, and raiders out to mess with your day in the most unspeakable ways.

You're playing a sort of futuristic policeman, but you're not necessarily the good guys.

You can choose to collect bounties on people who've deferred on payments for their bionic limbs. You can sort of imagine what you'll be collecting. (It's limbs).

The game is heading to Steam to begin with, but it should be making its way to tablets after that. And if it can fulfil some of its gory, wasteland promise, it's going to be very special indeed.

Full disclosure: Pocket Gamer and AppSpy alumni Peter Willington is working on the game as a producer.
Next Up :
Marvel Snap preview - "Fancy visuals and fast-paced card battling fun"