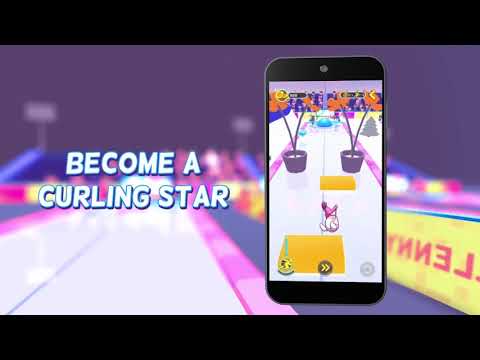 Winter sports don't often rank high on the list of peoples pastimes, with most of us happily admiting that outside of a Winter Olympics, we couldn't care less about them. That being said, a small Sweden based indie team has set out to prove that just about any sport can make for a fun and addictive experience...with the right twist of course.

That's definitely the case here with Curling buddies which, loosely based on the sport of curling, trades in stones for little people. Coupled with intuitive tap-and-drag controls, this hugely amusing take on the sport lets you hurl a variety of cute little characters across obstacle laden tracks to hit your targets. The game glided its way onto iOS devices earlier this month, and now Android users can join the fun as it’s just hit Google Play.

The Android edition of Pastille’s cutesy sports sim includes the same content as the iPhone and iPad version that landed several weeks back, coming complete with 40 crazy curling tracks, and an unlockable Zombie Mode thrown in for good measure.

At first glance it might seem a little out of place for a whimsical game like this to have you tackle curling tracks infested by reanimated corpses, but Curling Buddies offers an alternative, non-violent take on the zombie apocalypse which makes it feel right at home in the game. Rather than avoid the zombies or take them out, it’s your job to cure them of their infection and turn them back into humans.

Although Curling Buddies might appear to be based on a straight forward premise, don't let yourself get fooled into thinking that the game will be a breeze. As you go through each level, they'll become progressively more intricate and challenging, requiring ever increasing levels of timing and finesse to nail that perfect slide.

By unlocking the aforementioned Zombie Mode for $0.99, you can enjoy and extra 38 levels plaus a host of exclusive playable characters- so there’s plenty of content to keep those fingers and thumbs busy.

What's A Preferred Partner Feature?
From time to time Steel Media offers companies and organisations the opportunity to partner with us on specially commissioned articles on subjects we think are of interest to our readers. For more information about how we work with commercial partners, please read our Sponsorship Editorial Independence Policy.
If you're interested in becoming a Preferred Partner please click here.
Next Up :
Rocket League Sideswipe's first season gets underway today alongside a crossover event with Rocket League

Curl your way to Olympic-style victory in Curling Buddies, now available on iOS