Over on indie game community website TIGSource, a rather interesting-looking iPad project has been unveiled. Yes, Terra Incognita's slow-burn charms certainly have us intrigued.

The two-man team behind Terra Incognita (which is a working title, by the way) calls the game a "roguelike-strategy-puzzle-game", in reference to the classic procedurally generated dungeon-crawlers from the '80s.

As a 19th-century explorer in Terra Incognita, you must, well, explore the land, avoiding dangerous wildlife and deciding how best to deal with the native races you encounter.

Do you treat them respectfully and open up cordial trade relations, or do you march in like some sort of 19th-century archimperialist and demand the world?

Terra Incognita's developer says it wants to make you feel like a true explorer, offering you a constantly shifting landscape and a precariously tough difficulty level.

"As you explore and interact with the world, your actions will cause the region to gradually go out of balance, until the trail of chaos you left catches up and forces you to run for your life," the blurb for the game reads. We do so like chaos in our games.

As well as the act of exploring, you'll have to plan and equip your expedition depending on how you wish to play it.

Elaborating a little on the different characters you bring along with you, the developer explains: "the 'Specialists', as we call them for now, will feature different abilities that will allow you to play the game in different ways. In a sense, you could see each of them as different skill-lines in a traditional RPG sense." 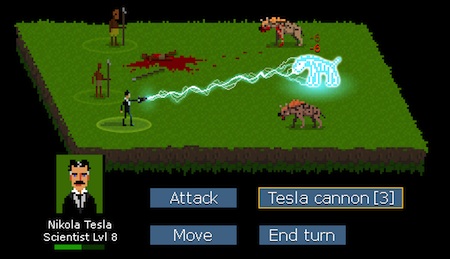 These "Specialists" include such historical characters as Nikola Tesla (who appears to bring a Tesla gun), Charles Darwin, and occultist Aleister Crowley.

The developer anticipates a 2013 release for Terra Incognita (or whatever it ends up being called) on PC and tablet devices. So, yes, Android owners could get a taste, too.