When brothers Cuphead and Mugman make one too many poorly thought out bets, they find themselves indebted to the Devil himself. To keep their souls out of Lucifer's hands, the pair must venture across Inkwell Isle and battle all manner of creatures to recover runaway souls.

It's hard to not admire the 1930's cartoon art style the first time you see it. It's so refreshing, and unlike anything seen in video games before Cuphead was revealed at E3 2015. Four years on and everything glistens, with boss fights in particular making the most of the art style with giant morphing moves and more.

Gameplay revolves around run 'n gun mechanics. You play as either one of the soulless protagonists, with jump, parry, dash, and specials all just a few button presses away. You'll learn the controls in the first few minutes, but mastery is a lot tougher. But if you want to get as far as possible in the game, mastery is the key.

This is built into the foundations of Cuphead - knocking down the difficulty from Regular to Simple prevents you from acquiring enemy's souls - in layman's terms you need to "get good". Thankfully levels take on average two minutes, with repetition being key. Cuphead in many ways is not unlike a rhythm title as arguably 90 per cent of winning is down to learning boss movement patterns.

After going through blood, sweat, and tears to complete a stage, performance is judged upon a variety of features, including: Time, HP Bonus, Parry, Gold Coins and Skill Level. Revisiting and refining results is a tremendous feeling – especially when coming across earlier adversary's that now feel as weak as a kitten.

There are three worlds and a finale, bringing one full playthrough of Cuphead to approximately nine hours (depending on your level of skill). Whether docked or on the go, Cuphead looks sublime. For the most part, this port has been handled extremely well but the obvious culprit that has took a hit is loading. Jumping in or out of levels can last anywhere between 10 to 15 seconds, and when coming off the Xbox version it shows. 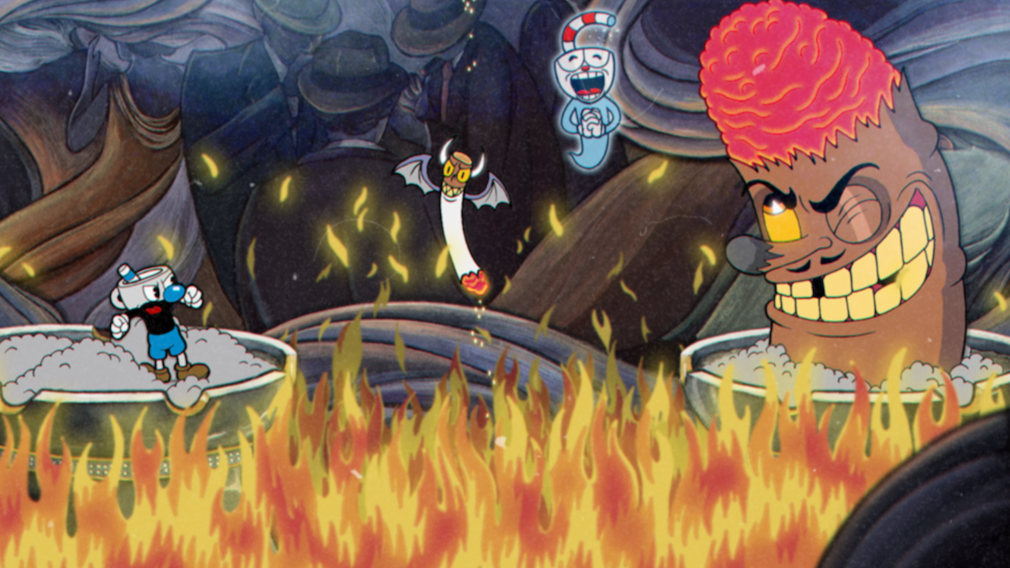 There's also the adorable minute glass that hangs around on the loading screen flipping away at his own's leisure. Constantly the animated element would freeze taking away from the charm and escapism of the world Studio MDHR is trying to create. For what it's worth, it might have been wiser to take the character out of the screen altogether.

As touched upon, all bosses require a level of skill, though there is one exception to this - King Dice, the devil's right-hand man. As his name suggests a lot of luck can come into play.

In fact, if the rub of the green isn't on your side you could be facing a maximum of 10 phases as opposed to the minimum four. Where everything else depends on the player's ability, King Dice feels out of place, even if his theme tune is killer.

Speaking of music, Cuphead composer Kristofer Maddigan truly went above and beyond to evoke the style of the era. Genuinely it's good enough to just pause and listen to. 42 musicians were used to create the "thrill ride of jazz jollies and big band boisterousness", while every instrument gleefully parades down the mic, showing off the clearly fulfilling jam session the group had throughout.

From the opening decibels, Cuphead is a delightful adventure that rewards patience and persistence. Though the difficulty may ward off some players, it's colourful palette, host of weird to wonderful bosses and fast gameplay level loops are more than enough to make the game one of the best to own on Switch.

Cuphead's friendly demeanour, thrill ride of jazz jollies, and stellar gameplay feels right at home on the Switch
Next Up :
Netflix Oxenfree review - "Reading the signals of a thriller story"