The world is in crisis. An all too common catalyst for video games, yet one that provides the backdrop for some seriously fun escapades. Mechstermination Force from Hörberg Productions is the latest to use this motivation, following a four-year gap from the studio. After such a long wait, is the robot basher all systems go or a malfunctioning mess?

On January 17th, 2024, leading nations of the world fell to the building size machines named MegaMechs. With humanity in ruins, it's left up to a small squad of resistance fighters to take down these mechs one by one. From the off there's a lot to love about Mechstermination Force. The colours for one pop from the screen, whether in handheld or docked, while the easy-to-pickup controls mean within minutes you'll be mid-battle.

Positioned as a run 'n gun boss rush, Mechstermination Force feels like Cuphead meets Shadow of the Colossus. Enemy variety is what this game thrives on - one minute you'll be facing off against a giant robotic centipede (known as a Mechapede, obvs), the next you're taking on a humanoid machine designed like a cowboy – razor sharp spurs and all.

It's how each fight unfolds that's truly entertaining. Take early boss Mechstructor ZC for instance. The aim with each encounter is to wear away the opposition's armour before destroying its multiple energy cores via your trusty baseball bat. Mechstructor ZC is no different, but at the halfway point the whole thing transforms into a homicidal crocodile. Instead of being stationary like the first phase, you're now running for your life as the rampaging reptile demolishes everything in sight. Chaos at its very best.

Not long after starting, players will be gifted from the local merchant (which we'll come onto) a set of Magnetic Gloves. Using L and R you can climb up specific metallic surfaces that help to keep confrontations fresh. Later a double-jump is acquired via Boost Boots bringing in an extra add-on to learn for the most demanding levels.

During battles, users can pick up coins to then spend at your camp's shop. Here you can buy upgraded weapons or hearts to increase your health. Deciding where to spend my hard-earned cash was an enjoyable conundrum. As the difficulty ramps up, it was really useful to be able to revisit old stages to earn some extra money to help further prepare. 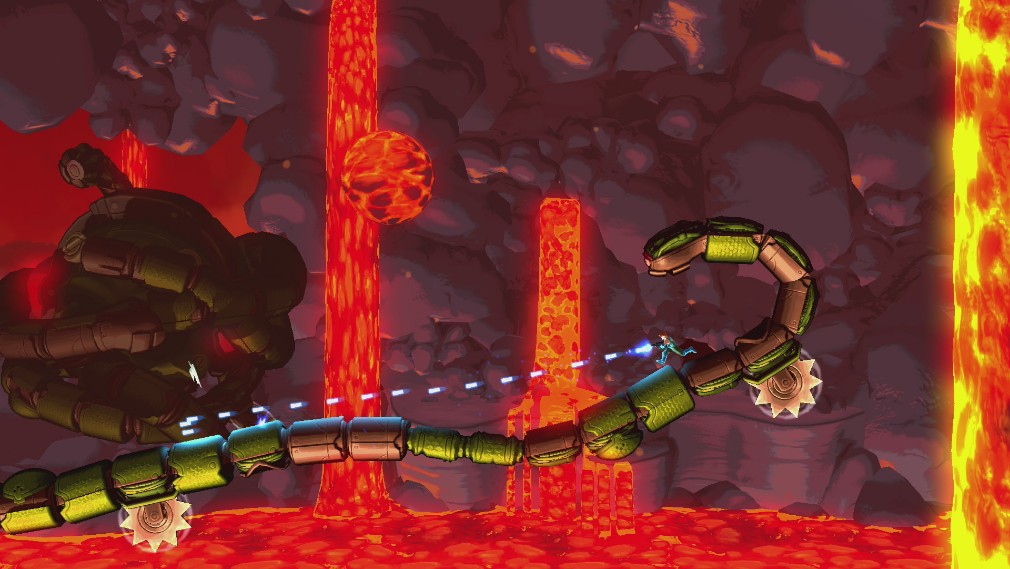 Loading is superb; barely being noticeable. Music on the hand has enough to keep battles tense but not nearly enough that you will humming the tunes long-after switching the game off.

Co-op is a nice touch, working well docked and somewhat well while on the go. When two of us were on screen at the same time as explosions were taking place, the screen would shake just enough to cause disruption. Nothing major but worth noting.

Mechstermination Force is built upon the die and repeat formula until you successfully learn the best strategy. It's a fantastic feeling to get that final hit on a boss after a good 20 minutes of trying. It's wholly rewarding, not only the win but the time spent.

Unlike some titles that possess high-difficulty, here most bosses (especially the earlier ones) can be complete in under half-an-hour. It would be great though, if the game showed how much progress you made during that run. You can make an educational guess but an official progress bar could potentially be just enough to spur players on.

Every MegaMech battle is charming from start to finish, still it's a shame there is only 14 in total. Overall for the price you can't go wrong, there's enough quality here that Mechstermination Force is worth the time you'll spend. Let's hope we don't have to wait another four years before seeing another game from the studio.