iOS + Android
| CryptoKitties
Welcome to the latest in our series of Pocket Gamer columns. We're taking the best games writers in the industry and giving them a platform. Veteran journalist Jon Jordan is here each week examining the trends shaping your mobile games scene. This week, he's considering mobile blockchain gaming.

Did you miss me?

Wearing one of my other journalistic hats, this time last week I was in San Francisco for the first Blockchain Gamer Connects conference.

Held over two days, it was a fascinating introduction into the state of this new gaming sector: one which is both incredibly nascent yet potentially groundbreaking in terms of the impact it might have on mobile, PC and console gaming.

Trying to pin some numbers on its scale, it's reckoned around 5 million people have bought a cryptocurrency such as Bitcoin or Ether, the latter being the most useful in terms of gaming.

This seems like a lot of people, and certainly there's been a lot of activity over the past 12 months in terms of dozens of gaming startups attracting investment from some of these 5 million as they've launched their own tokens to fund projects.

But when it comes to actual blockchain games, the most popular is the collectibles browser game CryptoKitties, which is estimated to have generated around $75 million in terms of in-game transactions.

That's a reasonable sum of money, but given how the game's economy works, it means its developer has likely generated only around $7.5 million in revenue through selling new kitties and taking a margin of every item trade. That's a less interesting amount for many established game developers

Similarly CryptoKitties' audience is far smaller than that 5 million figure - maybe more like 250,000 people have ever played the game.

And according to DappRadar, which tracks current player numbers, its daily active player count has dropped from around 1,000 in March to under 600 at time of writing.

The contrast with even the most humble free-to-play mobile game, let alone the 10 million currently playing PUBG Mobile every day, is stark. 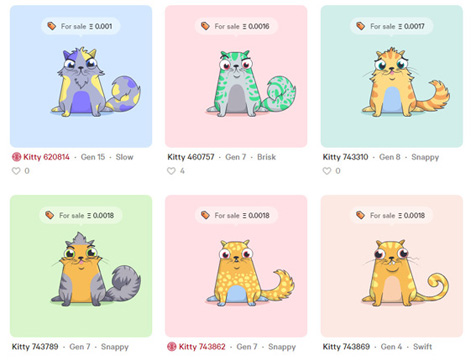 At present, this is the biggest issue with blockchain games. There just aren't enough players - and hence revenues - for it to be anything more than an experimental field.

One reason for this are the difficulties of playing these games, which typically involve buying some cryptocurrency, then signing up to a browser-based wallet compatible with the game, and then transfering your currency to your wallet.

Another obstacle is the limited gameplay offered. In CryptoKitties, for example, you can buy cats, sell cats, breed new cats and offer your cats up for breeding. And these actions require you to spend money.

Yet, CryptoKitties may just be the first blockchain game to break out.

As its creative director Benny Giang said at the conference, "We're really focused on getting moms and dads to play," which echoed another speaker's point that Facebook gaming only took off when FarmVille launched, while F2P mobile gaming went mass market when the female-friendly Candy Crush Saga was launched.

In that context, CryptoKitties' simplicity and broad appeal is perhaps its strength.

A good measure of this will be seen in the proposed mobile release of the game. For somewhat bizarre reasons, this is first being tested on iOS in China, a country which has banned its citizens from trading cryptocurrency.

Unsurprisingly, progress has been slow, but apparently 5,000 players have had access to the game via Apple's Testflight testing platform.

And whatever happens in China, it seems unlikely CryptoKitties won't launch on mobile devices globally at some stage in 2018. Then we'll really get to see how how the challenges and opportunities for blockchain gaming stack up.

If this column has given you food for thought, share your comments below and bookmark Jon Jordan's page for more of the same next Monday. Remember to also check out words of wisdom and mirth from experienced games journalists Susan Arendt and Harry Slater each week.
Next Up :
Top Ten Commanders in The Lord of the Rings: Rise to War