One thing common in a lot of free to play games is hand-holding as well lengthy and unavoidable tutorials.

You probably know what it's like. In the first few minutes, these games ensure you know exactly how to play, and especially how to make in-app purchases.

This is an element of free to play games on mobile that irked Bulwark Studios. And so this French team set out to address this in its tablet strategy game Crowntakers.

Talking to PocketGamer.biz, Bulwark's project manager Emmanuel Monnereau explained that, with Crowntakers, the team "decided to develop a game [they] would personally play on [their] tablets."

But first, they took Crowntakers to Steam where feedback from players is quicker and easier to acquire "because of their forums, instant-patching system, etc," Monnereau said.

This was all in aid of improving the game's tablet version and to ensure it was nothing like those free to play games.

"We focused on exploration and mastery of mechanics. We wanted you to figure out how to defeat enemies, optimize battles, and not simply give you all the tricks to do so via a tutorial,"Monnereau said.

This is why Crowntakers has been designed so that it kinda throws you in the deep end. When you die in the game you are punished by losing that character forever and having to take on the next person in the family line.

This trial-and-error system is what Monnereau believes keeps people compelled in the game's cycle. As every death has its own unique lesson that you take into your next effort. 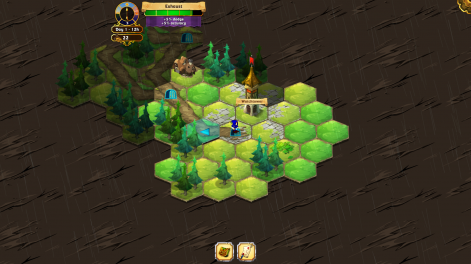 This is in place instead of a tutorial that takes you through every step of how the game works and removes the mystery and challenge.

Monnereau talked a lot more about the design and development of Crowntakers in the rest of the interview. So to read the whole thing head on over to PocketGamer.biz.

Crowntakers is the first mobile game from PC strategy game giant Kalypso, out on iOS now