It’s not all in the cards

With its beautifully hand-drawn aesthetic and the stirring inspirational score, Crimson Company takes me back to those old medieval point-and-click games on DOS I used to love so much - but that’s not to say that the game is in any way outdated. On the contrary, the card battler-slash-RPG-slash-MOBA hybrid has one of the most unique game mechanics I’ve ever had the pleasure of experiencing in years, and it’s incredibly refreshing.

While the game is pretty straightforward - you’re thrust into a tutorial battle right from the get-go with no other fancy distractions - the rules of the card game are anything but. In Crimson Company, your fate doesn’t rest entirely in the cards on your deck. In fact, Lady Luck doesn’t have that much of an influence here, because with each round, both you and your opponent essentially share the same deck, and the drafting is done right during the match. But with both players competing for the same pool, how does one emerge as the victor? The answer is simple: you just have to make the right decision. 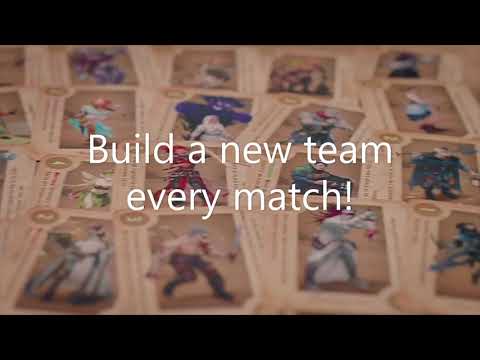 This is where your own strategy comes into play. Cards have different abilities when placed on the board, and you win the match by dominating two of three lanes. The structure reminded me a little bit of Gwent from The Witcher franchise, and it’s an absolute delight.

The similarities stop there, however, because there’s a certain sense of economy and resource management that makes Crimson Company unique. For example, it’s up to you whether you want to place a card on an existing lane both you and your opponent are fighting for, or put your card down on a different empty lane instead to get an early advantage for when you fight over that lane later. You can also decide if you want a stronger card - like the Knight which has an attack power of 5 - or one that has a better ability - like the Assassin with an attack of 1 but with the ability to destroy one of your enemy’s cards in the same lane.

There were also many times when I felt like I needed to try and manipulate the decision my opponent was going to make by essentially forcing them into a corner.

What exactly do I mean? In Crimson Company, you place a certain number of coins on the card on the deck that you want to take and use for yourself. Once you place your wager of sorts, your opponent has the option of paying you double what you wagered and taking that card for themselves. This leaves you with no card for your turn, but grants you a faster way of earning money, which you can then use to place bigger bids on the next round of cards that pops up on the deck.

I found that sometimes, I wanted to trick my opponent into taking a crappy card by placing a single coin and tempting them to take it for themselves for a measly two coins - all because I wanted the next card that was about to come up. It might also bankrupt the opponent, leaving them with no choice but to let you make your bid on the next card since they have no way of trying to outbid you for it.

It works half the time, but that trick has led to my downfall too a couple of times (a few unpleasant ragequits included), which, again, is where the beauty of each match lies - every battle is different, and nobody gets the upper hand just because he or she has a better deck.

Winning battles with an actual human person - as well as practicing with the A.I. - lets you progress through the map and helps you unlock more cards you can choose to include in your deck. The character designs of the cards are simply breathtaking too, so it definitely scratches that itch of wanting to collect cards just for the aesthetics alone.

So, here’s hoping we’ll see more upgrades in the final version of the game, because there’s certainly potential for it to be the next big thing.

Crimson Company enters early access on February 23rd for iOS and Android where there will be a final progress reset.

23rd February update - The kickstarter campaign is now running alongside the early access launch which aims to fund a new expansion and PC adaptation.

You can find out more over at the official Website and also join the community over at Discord to stay updated on the latest developments.

Crimson Company: 5 reasons to play this unique card battler where winning isn’t all about lady luck

Crimson Company, the popular Kickstarter-funded card game, is coming to iOS and Android this year