Cookie Run: Kingdom is celebrating Christmas early with the Tale of the Frozen Snowfield featuring two new Cookies and Season 2 of Super Mayhem

Winter is coming early to everyone’s favourite cookie game Cookie Run Kingdom. Today, November 17th, Santa is bringing gifts in the form of an update. Titled the Tale of the Frozen Snowfield, the update will introduce two new cookies and a brand new season.

Cookie Run Kingdom’s PvP mode Super Mayhem, which sees players create three teams of cookies that go on to compete against other teams receives its season 2 update titled Frozen Domain. It will go live at the same time as the Tale of the Frozen Snowfield.

The first cookie in Cookie Run Kingdom’s winter update is the Legendary Frost Queen Cookie. Her only mission is to guard nature and she does this by using the power of ice. She uses her skill Freezing Squall to freeze all nearby enemies and damage them heavily, while also inflicting a frozen status effect. When ice thaws, it can crack even rocks. Just like that, enemies are dealt extra damage when they thaw. Enemy cooldowns also come to a standstill when they are frozen. The Frost Queen Cookie has been voiced by Cristina Vee, known for voicing Riven in League of Legends, Yuko Tani in the Godzilla series, and Meiko Mochizuki in Digimon Adventures. 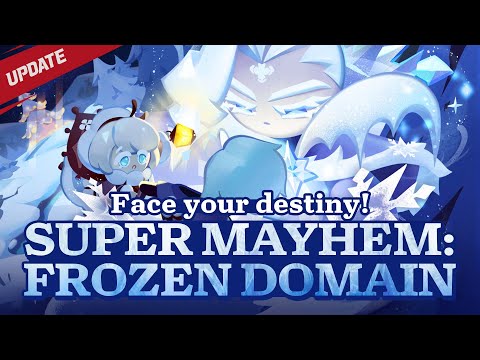 Next up is the absolutely adorable Cotton Cookie. An Epic rarity cookie, Cotton Cookie is the shepherd of the Cookie Run Kingdom world. A support who wishes to protect her fellow friends from the wrath of the Frozen Witch. Using her skill called A Warm Light, she can restore the HP of allies and increase the attack power of summons. Being a shepherd, she can call upon an army of sheep that will fight for her and deal loads of damage to enemies. Cotton Cookie has been voiced by Cherami Leigh, previously known for voicing Sarada Uchiha in Boruto: Naruto Next Generations, Aisa in One Piece, and Lucy Heartfilia in Fairy Tail.

Check out this month’s promo codes to get lots of goodies for Cookie Run Kingdom!
Next Up :
Downhill Smash is an upcoming physics-based game that will let you smash brain-eating zombies using a boulder next month