As you may or may not know, Apple rejected a title called Endgame: Syria a couple of weeks ago on account of it contravening an App Store policy.

According to The Big A, Auroch Digital's Endgame: Syria was in violation of an App Store policy preventing the sale of games in which enemies "solely target a specific race, culture, a real government or corporation".

This wasn't an incredibly surprising turn of events, for Apple does have previous in this regard. The fact that Google had already 'approved' Endgame: Syria for download on its Android marketplace was almost as predictable.

It's getting hot in here

The brainchild of Auroch Digital designer Tomas Rawlings, Climate Defense aims to gamify the topic of climate change, and make players approach a difficult subject from a different perspective.

Rawlings uses classic tower defence mechanics in Climate Defense to demonstrate the damage being done to the planet by CO2 emissions and the greenhouse effect.

To stop the clouds of carbon dioxide from reaching the upper atmosphere, Climate Defense players have to upgrade a large tree with apples and blossoms.

You can also stop things heating up by cutting emissions and improving efficiency. 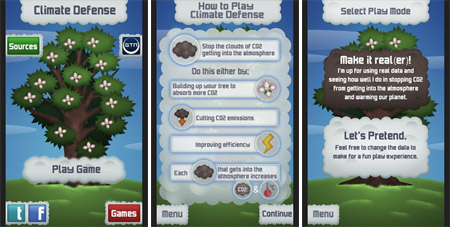 In our recently published interview with Rawlings, he confirms that he talked to experts with regard to Climate Defense's content.

Speaking about the Game The News project as a whole, Rawlings said: "If we're not delivering a fresh perspective on current events... there's no point in doing it."

You can download Climate Defense for free from Google Play now.