Click Your Poison: Infected is an adaptation of the branch path story penned by James Schannep. It sees you trying to navigate your way through a zombie-infested world by making important decisions. As you'd expect from a choose-your-own-adventure game, there are multiple endings to discover, so we sent in our App Army to see how many they could find.

Honestly, I wasn’t sure how I’d react to this one. I like audiobooks but I generally listen to them while doing other things, which you obviously can’t do with an interactive story. The game is a story with branching paths that allows you to make choices to change the outcome. Kinda like a choose-your-own-adventure book from the 90s. The presentation is very basic. Literally just the text of the story on the screen. This type of game lives or dies on the story and narration. Thankfully both are engaging and very entertaining. I definitely recommend this one.

If you are into audiobooks and/or gamebooks and/or Zombie games, then Click Your Poison: Infected will be right up your alley. Infected is a zombie-themed gamebook with fantastic writing and even better narration. You have several options at the start, some of which seem very unwise and therefore were the first I picked! I revelled in starting out by making those types of insanely stupid decisions that characters in horror films always make just to see what would happen.

After that, I settled down to try and actually survive. Trying to survive in this game is tough, but a lot of fun. The storyline branches out in ways that make you want to come back and see what would have happened. And what looks like the end for your character can sometimes have surprising longer-term results. My only “critique” is that I read faster than the narrator speaks.

I put “critique” in quotes because there isn’t anything actually wrong with the game, it just takes longer to read out loud than to read silently. You have an option to hide the text and after I did that and started treating it like a chose your own adventure audiobook, I found myself enjoying it much more. I thoroughly enjoyed Click Your Poison: Infected and will be eagerly searching for new routes through this well written and voiced world. 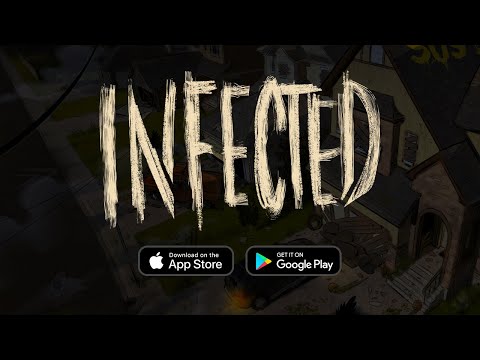 This is a great audio interactive novel with a storyline that involves zombies. The narrator is well suited to the storyline which is very descriptive, allowing your imagination to take you on the journey. There are drawings along the story allowing you to envisage your surroundings on each page. As an avid reader, I couldn’t resist turning the sound down and reading the novel myself. This was easy to do and as I read quicker than the narrator I found it handy to have the slide at the top to fast forward to the options section. With the usual multiple choices and endings giving extra playability I think this game is value for money and I would definitely recommend it.

I must admit I’ve not had as much time as I’d like to play this. But I’ve given it a go and what I’ve played/experienced has been absolutely amazing funny. Tongue in cheek zombie romp. You are presented with a chapter that is narrated to you (excellent voice acting) at the end of the chapter you have a number of decisions to choose from to further your adventure despite the brilliant presentation.

As Owen Buck has pointed out the narrative can move slowly. You can always read at your own pace and skip the voice acting ahead to get choices. If you play this game. Go at it from the point of view as an interactive audio drama. I died or failed a few times. But despite this, I was always keen for just one more go. Give it a try. It is really good.

Was looking forward to this one as I'm a bit of a zombie genre fan! To be honest with you it was a real struggle to play this. I like to read fast in these kinds of choose your own games, to fit some gaming into spare minutes here and there, but this one..? You have to wait for the narration to finish before you can move on. Found it super frustrating and as such didn't enjoy it at all. Add a skip button and maybe you'd have a fan here. Until then, for me, it's unplayable.

I quite like this game. It is well aware of the silliness of its premise and doesn't take itself too seriously, instead just trying (and succeeding) to be fun and entertaining. I found the humour amusing, the voice acting on point, and the choices interesting and difficult. The language is evocative, and I had no trouble visualizing the scenes. Overall, a fun, if a bit cliche, audiobook adventure.

This reminds me a bit of Plan B From Outerspace. It’s a click-through, choose your own adventure story with undead instead of aliens and Bavarians. The story was cute. The choices you could make were interesting. I liked the little visual scenes you could see for each page of the story. I liked the narrating. But I did find that I was reading faster than the narrator, so I quickly dragged the progress bar across the screen to advance to get to the end.

And I’ve played through four times so far, on four different paths, and died fairly quickly. Well, died when I was alive and hit a quick story finish when I was undead. So while I kind of like what’s there, it seemed to go pretty quickly. Yes, there are plenty of different choices so plenty of replay value, the stories seemed to go by pretty quickly, so to me, didn’t have a lot of depth. If you really really enjoy these, you’ll probably like them. But I was a bit underwhelmed, to be honest.

Click Your Poison: Infected offers hundreds of choices and 50 possible endings in this new interactive game-slash-audiobook