Clash Royale - What the latest patch means for the meta

How do the new cards stack against the current stack?

Clash Royale spells are a pain in the backside. The game is at its best with a free-flowing swap of attack and counterattack, but spells have no counter.

You just have to sit there and endure them. So after the last set of balance changes made them more useful, I was hoping this new set might at least offer some counters.

Not so. Instead what we've mostly got are defensive nerfs. Bomb Towers, Cannons, and Mortars all took a greater or lesser hit. Which isn't bad, since gun emplacements are the second biggest pain in the backside of Clash Royale.

To compensate we've got better loot and a bunch of shiny new cards. Unfortunately, three of them are legendaries and all of them unlock in arena five or higher, so a lot of players aren't going to see them for quite some time.

For those of you lucky or rich enough to do so, here's some thoughts on how they'll might shake things up.

The most frequent new cards you'll see are the Fire Spirits and their hut building the Furnace. These bouncing beauties look adorable as they bob across the battlefield, up until they explode and destroy everything on the ground and in the air in a small radius.

They're a cheap, effective, yet fittingly fragile counter to expensive mobs like Barbarians and the Minion Horde. They're good against goblins and skeletons too, although far less cost effective.

The easiest answer is to remove or reduce the costly horde cards in your deck. You will likely see this happening as the Spirits become more common. 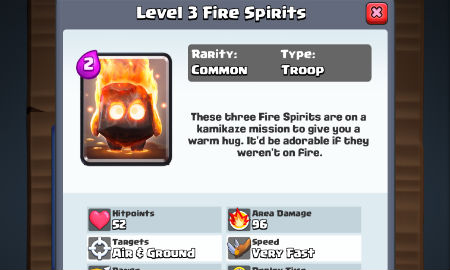 If you don't want to take that course of action, Fire Spirits are easily destroyed by targeted missile attacks like Arrows. If you're cunning you can also minimise their impact by forcing mobs into a line instead of a bunch by deploying them right behind a building.

The only other card you'll be seeing with any kind of frequency is the Guards. This summons three skeletons with shields and armour, like that of the Dark Prince.

That means they have two separate hit point pools, and so can survive two heavy hits each. They're a fantastic counter for a range of big-damage units but are, in turn, vulnerable to minion swarms.

Guards are particularly good against one of the new legendary cards, Sparky. If you see this tank it needs to be dealt with right away, as it's capable of inflicting massive area damage against ground targets. Enough to level pretty much anything in its path.

Fortunately, it's not that tough. As well as Guards, the Dark Prince, air units, and direct damage cards should be able to deal with it effectively.

It's going to mean bigger changes for people who want to run it than for those who have to deal with it. To keep it on the board, it'll need supporting with a powerful ranged unit like a Wizard or Musketeer. 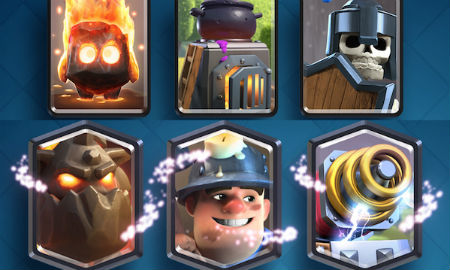 It also partners well with another new legendary, the Lava Hound. This is a flying anti-building unit which makes a great meat shield for weaker troops.

It also splits into Lava Pups when it dies, and these attack units instead of buildings. It's both effective alongside and weak against the Musketeer, since the latter can pick off the Lava Pups easily when they spawn. So whatever you're packing, that gun-toting lady is looking a good bet in a number of deck styles.

Finally we have the Miner. This cheeky chap doesn't have great stats but can be deployed anywhere in the arena which makes his use fairly straightforward.

He's for surprise attacks against buildings when your opponent is over-committed and can't summon troops to defend.

In terms of changes to the existing troops, push-back to Valkyrie and the Mini P.E.K.K.A. are no big deal. Not that many players are currently using either card. Same goes for the cannon - an 11% hit point drop isn't much if it's filling a useful slot for you.

At first glance the Mortar looks to have taken a big hit, but it's still a very useful card. If you want to run it, you're just going to have to learn to anticipate a little more, to make up for the added two seconds of deployment time. 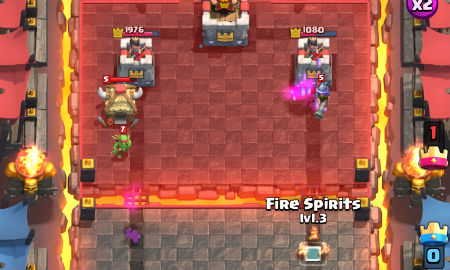 The Bomb Tower and Elixir Collector changes are a different matter. If you're using these, take a good long look at whether you really need them. The Bomb Tower, in particular, looks like it could be better replaced by the new Fire Spirits.

If you're lucky enough to have a Royal Giant, he now looks like a useful addition. Because he outranges a lot of defensive buildings, protect him with something like Minions or the Baby Dragon and he has the potential to wreak havoc.

So what overall changes should we be anticipating?

First, if you've got a Musketeer, she should probably be in your deck. Even if she doesn't partner well with your current cards, she's still an effective counter to a wide range of threats. And with the new cards in the mix, that range just got wider.

Second, Fire Spirits look like the best anti-swarm choice at the moment. Their ability to nail both ground and air units, combined with their cheap cost and relatively high damage make them hard to beat.

You can expect to see less defensive plays generally, and that's a good thing. The game thrives on aggression. Go with the flow and chuck some big-hitting or anti-tower units into your deck.

Finally, painful though it is, it looks like everyone's going to have to run some spells for the time being. Even if it's just an Arrows or Fireball card, the ability to pinpoint targets looks extra useful right now.

Especially if you're playing in higher arenas where you might need to suddenly deal with Sparky or a Miner.

So next time, SuperCell, please think about nerfing the spells instead?