Clash Royale - the best deck for a beginner

So you're new to Clash Royale and you feel a little overwhelmed with the cards on offer? That's okay, we've all been there. I'm not going to judge you. I'm not the judgey sort.

But what I will do is throw some ideas in your general direction about what a decent starter deck should look like. It's not going to be invincible, but it should have a decent balance of attacking and defending capabilities.

Don't think of these suggestions as definitive either. You might get lucky and end up with some incredible cards of your own. If you do, feel free to throw them into the mix and have an experiment with your set up.

And if you've got suggestions for alternative decks, well throw them in the comments at the bottom of the article why don'tcha. We're all in this together after all.

The long and short of it

Okay, you've completed the tutorial. Well done. Wasn't that difficult was it? Now it's time to go about building your first deck.

One of the most important things to understand is you're going to need a mix of talents and skills if you want to do well.

Each card is a unique unit with its own strengths and weaknesses, and combining them is the best way to get the most out of attack and defence. 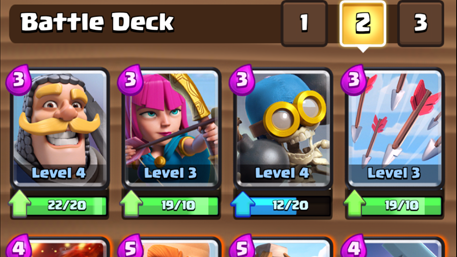 To start with you're going to want to pair together a ranged unit and a melee unit.

It's likely you're going to have the Knight and the Archer in your deck, so they're your best bet to start with. When you send them out, make sure you've got enough elixir to send them both.

This is important, because the Knight can take more hits while the archers give support. Sending them out on their own is probably going to get them killed before they get to the towers, and that's not really much use.

Both of them are easily distracted though, so use that to your defensive advantage. They'll head towards any units in range and engage them rather than heading straight for a building.

At the start of the game you're probably going to have the Arrows spell and the Fireball spell. The Fireball is for buildings, the Arrows are for units.

These roles are slightly interchangeable in a pinch. A fireball will do decent damage to a giant for example, and if things are getting frantic towards the end a rain of arrows aimed at the crown tower can change the flow of battle. 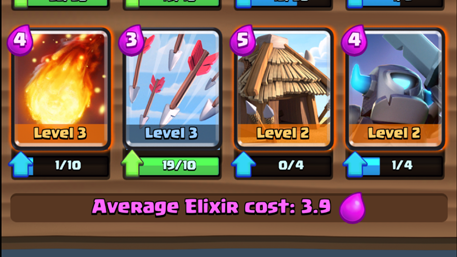 If you're coming up against a lot of people with a Skeleton Army then using your rain of arrows is a great way to thin out the numbers before they do a lot of damage.

Think of it as defensive in nature and you're on the right track. They're also useful for clearing a path for focused units without spending a lot of elixir on support.

To begin with your Giant is going to be your tank. It's a bulky, no-nonsense sort, with eyes only for smashing up the first building it comes across.

It's always worth pairing a giant up with a support unit, be that archers or goblins, to try and clear a path for it. The more health it's got when it reaches a tower, the more damage it's going to be able to inflict before it's killed. 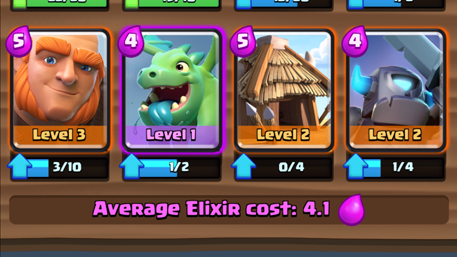 Another tanky wildcard comes in the form of the Baby Dragon. They're not focused, so they'll wander off if they see anything interesting to try and kill, but they're excellent for taking out big groups with their fire blasts.

And because they're flying units it's sometimes easy to get them to a tower without taking too much damage. If a path only has enemy melee units on it, the Dragon will make pretty short work of them.

Defending against tanks involves using swarms. The giant won't attack anything except buildings, so surrounding it with weak melee or ranged units can chip down its health before it arrives.

The Baby Dragon is a little tougher. It does get distracted, and you'll need to use ranged units to take it down. Spear Goblins, Musketeers, or Archers are your best bets here.

You'll have used up five or six of your card slots now, leaving you with a bit of space for some more adventurous choices.

If you've got any buildings, I'd suggest putting one in there. They can soak up damage from your towers, and they're useful for defending one lane.

The other slots should go to damage dealers. The Mini P.E.K.K.A, the Prince, or the Valkyrie are all good choices. They're tough, they're violent, and they're not as expensive as some other cards.

If you're lucky enough to bag a Witch, then add them in straight away. Not only do they do a lot of damage, they also spawn new enemies to help along the way. A Witch might cost you 5 Elixir, but you get a lot of bang for your buck. 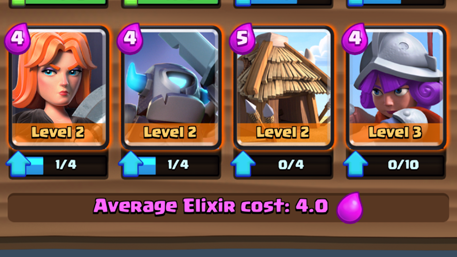 Your balance should be something like two spells, a couple of melee units, two ranged units, a giant, and then a wild card of your choice depending on how you like to play.

Don't be afraid to experiment with your deck. And remember that just because you get a shiny new card you don't have to throw it in straight away.

Find the right balance and you should be winning more than losing.