Today, Supercell has provided updates for how development on three of its upcoming games is progressing. In a new video – which you can see below – we learned a bunch of details about Clash Mini, Clash Quest, and Clash Heroes.

First up, we learned that Clash Mini is heading into beta in Canada, Finland, Denmark, Norway, Sweden, and Iceland on 8th November. During the beta, players will create a team of Heroes and Minis to send into battle in an auto-chess lite setup. Supercell also mentioned they might introduce new content while adjusting existing Heroes and Minis based on player feedback throughout the beta.

We recently had a chance to chat with Game Lead/Designer Fan Fang and Community Manager Vlad Perge about the strategy game in more depth, so be sure to check that out. 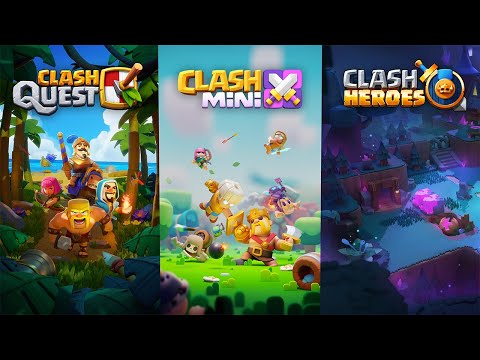 Next up, we learned that Clash Quest is still in the early stages of development, and there is no set release date just yet. However, the team recently held a closed alpha test with a few hundred players who provided feedback on improving the game. Going forward, Supercell is looking to introduce new features, improve the gameplay, and work on world-building. The next stage for Clash Quest will be an open alpha test. However, there is no date for this at the moment.

Finally, the video details a few updates that have arrived in Clash Heroes since the game soft-launched. These updates introduced new bosses to the game, such as the Lava Hound, new troops like Minion and various features, including Shipwrecks and Dungeons.

The most recent update added Clans, allowing players to form Clans with their friends before competing in the Clan League. It also introduced a new boss called Bone Bros, two skeletal dogs who can stun a row of your troops with a single headbutt. The update also saw the arrival of a new unit, the Bomb Miner. He, unsurprisingly, leaves bombs in his wake for the enemy to step on with explosive results.

They also teased an impending update that will introduce the Magic Bow Defense, which shoots an arrow through multiple units like Clash Royale's Magic Archer. Additionally, we can expect a new boss called the Volt Viper, a giant snake that sports multiple Tesla coils on its back. Much like Clash Quest, there is no release date just yet, but you can sign up for the newsletter on the game's official website for updates.

Enjoy strategy games? Here are 25 of the best available for iPhone and iPad
Next Up :
Pikmin Bloom is hosting its first ever Community Day Event next week