Behold Studios is all about being meta.

It's first game, Knights of the Pen and Paper, was both a fantasy RPG and an adorable simulation of a pen and paper game - complete with a quippy dungeon master and discarded pizza boxes.

On the one hand, you have to manage a studio that puts out sentai TV shows (Power Rangers-style programmes). This involves hiring talent, equipping your actors with props, and completing the everyday chores of running a film set.

But to make money, you need to actually record an episode of the show, and this turns the game into a turn-based tactical experience with your team of sentai warriors beating up monsters against a green screen. 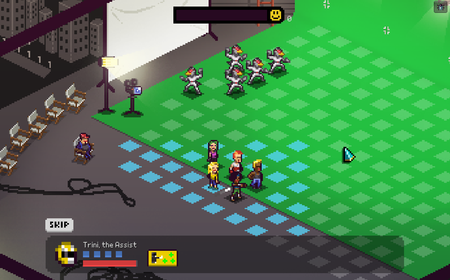 It's a traditional, but fast-paced and easy to play strategy game, with a few cool ideas. Your heroes start out in their civilian clothes and can't use weapons until you earn enough fame (which is gained by beating up foes).

Only then can you transform into your Chroma characters, and unleash your weapons. Which you can buy, or craft with materials like duct tape and cardboard. 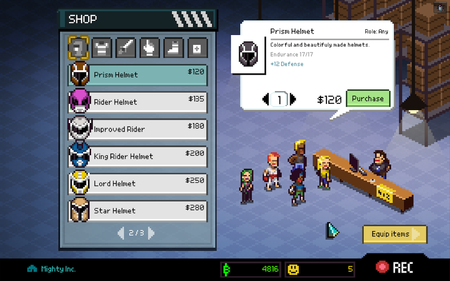 So Chroma Squad is, it turns out, more than just a clever idea. It's also a sharp strategy game, has a deep simulation backbone, and it's funny too. In a meta, fourth-wall-breaking kind of way.

The game is due in summer 2014 on PC, Mac, and Linux. Other platforms, including iOS and likely Android, are coming in late 2014. That is, if the continuing negotiations with Power Rangers distributor Saban don't slow things down.

Whenever it's finally out, Behold says that it will be a premium game and, unlike Knights, it will have no in-app purchases.