Don't try this at home

iOS + Android
| Chicken Jump
Updated on August 6th at 12:05: Originally we said Chicken Jump was hitting iOS and Android at the end of the week. What we meant was 2016.

The offending article has been removed, and the writer who put it there has been pushed into a well. Sorry like. 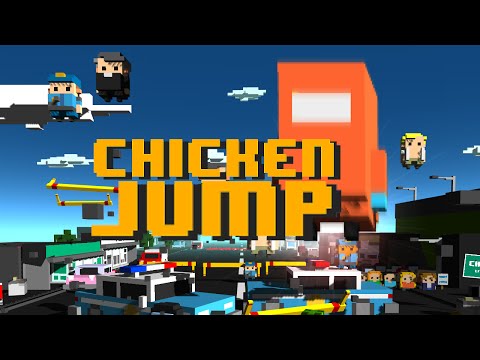 A game where you tap the screen to jump over oncoming traffic is probably not going to take home a prize at the Big Indie Pitch. There's just not enough to it, and it's hardly a novel idea.

But a game where four people all try to leap over cars, fire engines, and ambulances at the same time, while lobbing green shells at each other and elbowing each other out of the way?

Now that has a chance.

This is Chicken Jump: a simple one-tap game that is exponentially improved each time you add an extra player. Things become more hectic and way more enjoyable as more people share the tiny tablet screen.

It makes me want to play the PC version that supports eight players in one game, and can even be played with mad DIY mats that force the players to bounce in the air like idiots.

The game has loads of extra stuff like unlockable costumes that change your look, alter your stats, and force environmental changes like weather. And there's this whole trading card metagame.

But really, Chicken Jump took home a prize at the Gamescom BIP simply because it was fun, unassuming, and didn't take itself seriously in the slightest. We look forward to playing it again, when it hits iOS and Android in 2016.

Next Up :
Oceanhorn 2: Knights of the Lost Realm adds a collectible card mini-game called Arcadian Tarock in its latest update