Cat Quest II, a follow up to the adorable RPG Cat Quest, was recently revealed to be a part of the Apple Arcade line up. It's also heading to Switch later this year too. Developers The Gentlebros has revealed more details about the game as we inch closer to release.

The first of three major details was one of the areas you'll be adventuring in. It's called the Lupus Empire where the environment is very brown in its colour palette with deserts and auburn meadows scattered across its landscape. You'll be tasked with liberating the Lupus Empire from its mad emperor Wolfen.

The second new feature is the addition of multiplayer or mewltiplayer as the pun-loving developers prefer to call it. The original game was only a solo affair and it was a frequently requested addition when The Gentlebros announced they were working on a sequel. 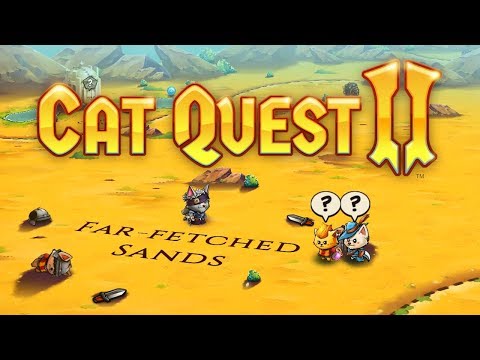 The final announcement was all about the loot you'll find in the game. There will be a lot more weapons to discover as well as spells. One of the new weapons will be two-handers meaning that your adorable little kitten warrior can now roll about with ridiculously huge swords, which is a wonderful thought.

Armour will also possess passive skills that you can upgrade as you continue your quest. This will allow you to customise your feline hero a little more by increasing their rolling distance or increase attack speed among other buffs.

Cat Quest II will be heading to Apple Arcade soon and Nintendo Switch in the Fall. Its addition to the Apple Arcade line up does mean that Android folks are unlikely to see the game anytime soon though. For a look at the other games offered as part of Apple Arcade check our extensive list of all the games, we know about so far.

Check out our news section to discover the latest, and greatest, games.
Next Up :
Letter Rooms adds an advent calendar to the anagram game, with a new puzzle to be released every day this December