As long as you don't mind dodgy menus

There's something strangely therapeutic about Car Mechanic Simulator. Not because it intends to be - it is a simulation game after all, so it's trying to be a detailed, serious affair.

Nor does it make it easy for you to find yourself entranced by it. The menus are incredibly fiddly, the controls confusing even after the tutorial winds down.

But give it some time and you settle into a gentle routine. Car comes in, car gets fixed, car goes out, money goes up. Rinse. Repeat.

You first need to buy a car. There's a small map full of barns which refresh after each purchase, and you go through them to find your next project. 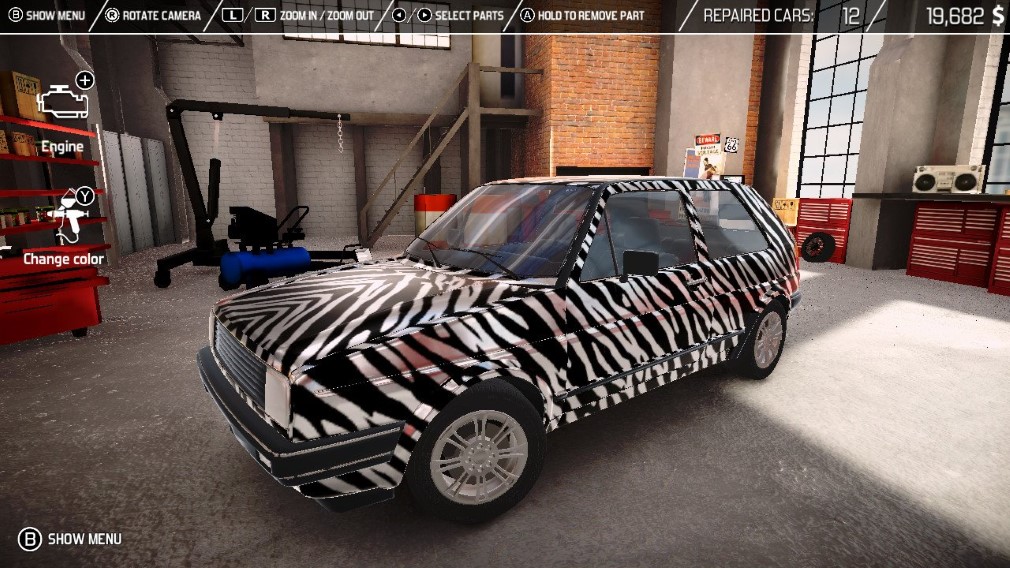 Some cars are in a worse state than others, meaning you can buy them for less, but you'll also be working on them for longer. But that's OK. You don't mind so much.

You buy the car and it teleports into your garage. First job - buff out the rust. All you do is gently rotate the right stick until it's all gone. Simple.

Then you can choose a new colour for the body. You can't choose individual sections to paint, so you can't go too wild, but there's a nice array of horrible, garish colours to choose from if that's your scene.

The body's all done. Now let's look under the hood. You get taken to an empty void, filled only with the inner workings of your machine. Press Y and the whole thing explodes out, highlighting the parts that need removing.

You get to work. You cycle through the parts with the directional buttons and hold A to remove a part. Sometimes you'll be removing perfectly good parts just to get to the rusted junk below.

That can cause problems in the long-run - your warehouse only has so much room, and in Car Mechanic Simulator, a spark plug takes up the same amount of space as a V8 engine. Don't stock up too much. 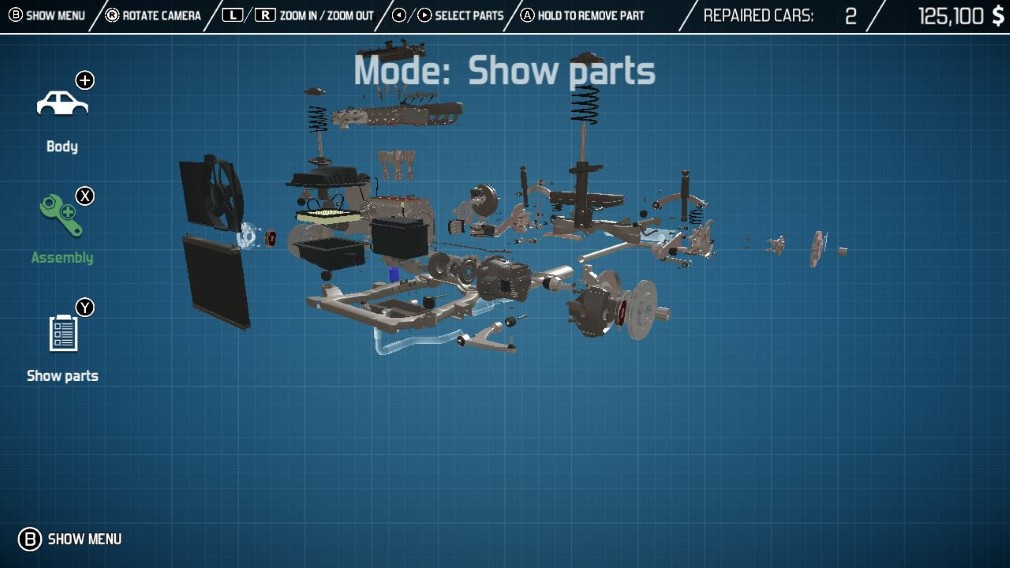 You sell your scrap parts to keep warehouse space free. Then you go parts shopping. You need to memorise which parts you need - the game doesn't make it that easy for you, and there's a ton of stuff to remember. Consider getting a pen and paper.

Then you fit the parts. It's the same as removing them, but in reverse. And you have to choose the new part from a menu. But it's still pretty straightforward. Bang, bang, bang.

A giant message dominates the top of the screen - repair complete. You can hold onto the car for a bit and marvel at your work, or you can just sell it. You sell it and make a small profit. And then it's onto the next car.

And the next car. And the next car. Never changing in complexity, no new gameplay mechanics to learn as you go. Eventually you can upgrade your tools, but that just opens up more cars to work on. The core loop is exactly the same for the entire game.

Find your groove, and Car Mechanic Simulator just completely takes over your brain. It's like a warm bath - you sink in, let it envelop you, and you don't want to leave. You can't leave. It's too nice here.

It's not a good game. That core loop is all there is to it, and when you're battling with the menus half the time, it can be frustrating.

But when you settle in, it's hard to break out again. You'll skip meals because you just want to fix up one more car. It won't take long, you tell yourself. And think how nice it'll look when you're done.