Part two of Broken Age is finally here. And, crikey, it's a toughie. Where the first episode was a tad too easy, this second half swings in the other direction.

There are some seriously tricky conundrums. Plus, you'll need knowledge from Vella's story to solve puzzles in Shay's.

With all that in mind, we've put together a step-by-step puzzle walkthrough to the game. This focuses on Shay's story, but here's how to beat Vella's section if you're struggling. 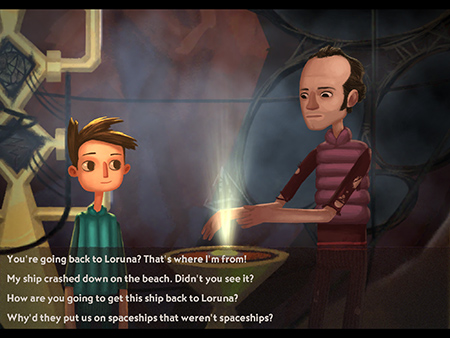 When you wake up, head to the left and then go up the steps to get to Alex's ship. Chat to him, and ask "Do you need any help getting your ship running?"

You'll find out that we're going to need to get a Superconductive Gyroscopic Hypercan, hypergravity thrusters, ship sealant, a radiation suit, and an electronics genius.

Before you leave Alex, ask about the "Superconductive Gyroscopic Hypercan". You'll get a schematic on a piece of paper, which we'll need later. 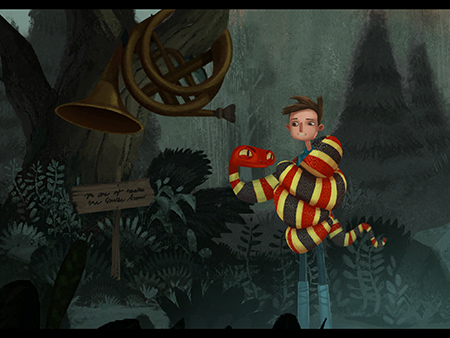 Leave the ship, go down the stairs and go left - and go past the talking tree. Don't go inside Curtis's house, but open his mailbox to get a picture of Vella (on a missing poster).

Now go back down the hill and take the path left until you get attacked by the snake.

The solution? Do nothing. Just wait until the snake passes out so you can pick it up off the floor and add it to your inventory. 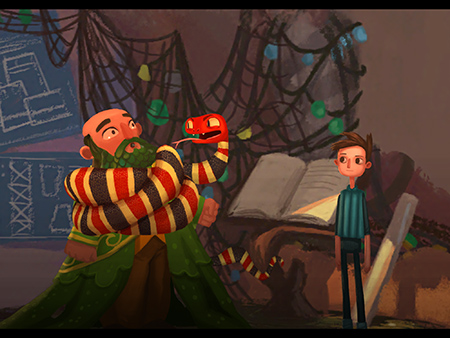 Return to Shellmound and use the snake on Marshall Dune. This will squeeze him so tight that he'll choke up a tuner which you'll automatically grab.

Now give him the schematic and say "I think sand is the perfect material". He'll make you a sandy Superconductive Gyroscopic Hypercan. 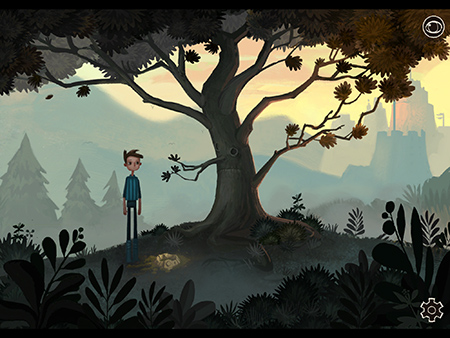 Go right, and put the sand structure in the pile of tree vomit. Then show the wanted poster to the talking tree and he'll puke all over your Hypercan. It's now a mold. 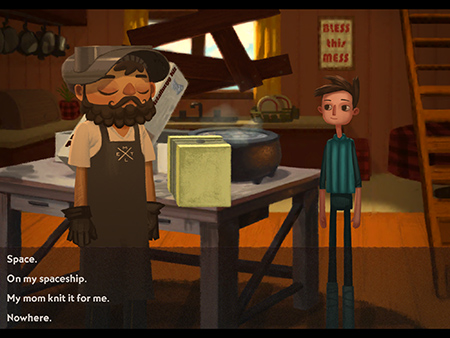 Go inside Curtis's house. After chatting to him for a while, give him the mold and he'll make you a real Hypercan. 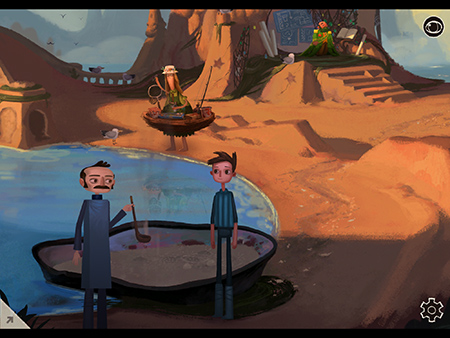 Go back to Shellmound and talk to your dad to find out what the heck he's doing. He's making a ship sealant but he's struggling to get it to the right pH value.

Start by plonking your spoon in the mixture to get a pH reading (5). Okay, now we have something to work with. 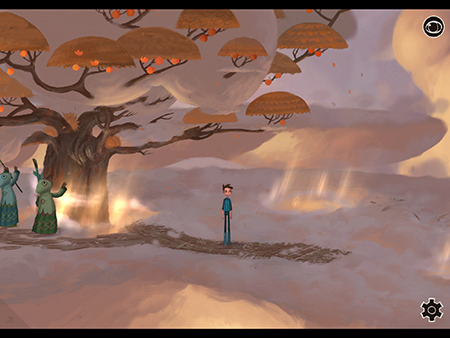 Take the long journey to Meriloft (using the ladder in Curtis's house) and up to the peach tree. Fall through the hole by the base of the tree. 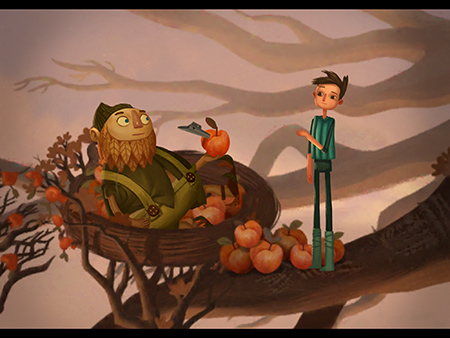 Go to the left of the branch network and talk to the hunter. Keep gabbing until he gives you the tapper. While you're there, grab a peach. 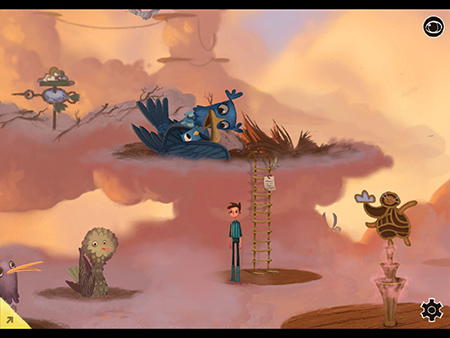 Head back to Meriloft and use the tapper on the egg. It will hatch and Shay will be able to pick up the egg shell. Now let's go back to dad. 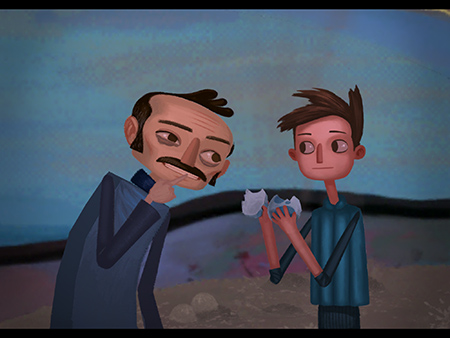 Add the egg shells to the slurry. It's now pH 8. Add them again to get pH 11. Now add the peach twice to get to pH 9, and then pH 7. Perfect! Use the spoon one more time and your dad will finish the mixture. 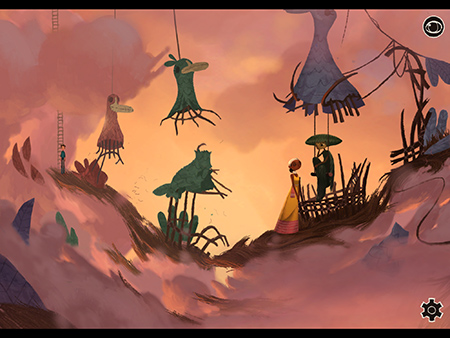 Go to Meriloft and take the ladder down tothe area with Twyla. Chat to her until you find out that she's good at sewing. Give her the baby radiation suit.

She'll agree to make you one, but you'll need material. 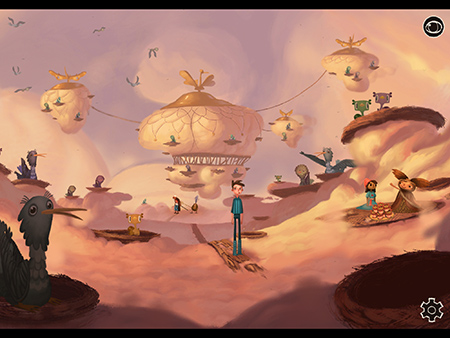 Go to east Meriloft. Attempt to buy a cupcake from Rocky and M'ggie, but find that you need money.

Go down to the area with Brommel and Ch't. Ask if they know where to find money to get a coin from Ch't.

Go back and use the coin to buy a cupcake from the girls. 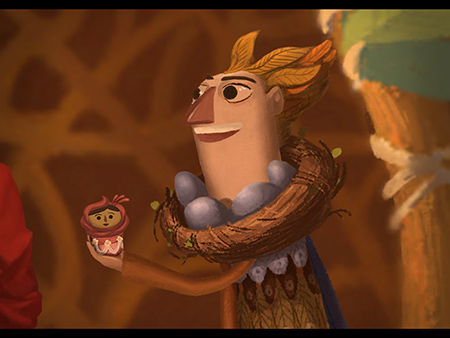 Go to the main area of Meriloft. Give the cupcake to Walt'r and he'll lick the frosting off. Now go back to Brommel and give him the cupcake. He'll frost your cake, and you'll get the empty cane. 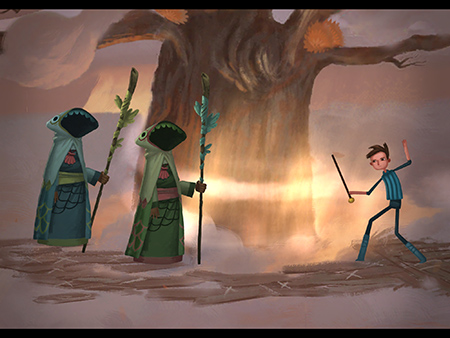 Go back to the peach tree and chat to the girls. Say you'll fight the girls, as soon as you have a stick. Now show the cane to the girls. After a cutscene, you'll be able to pick up the Dead-Eye Robes.

Take them to Twyla and she'll make you a more sensibly-sized radiation suit. Bingo! 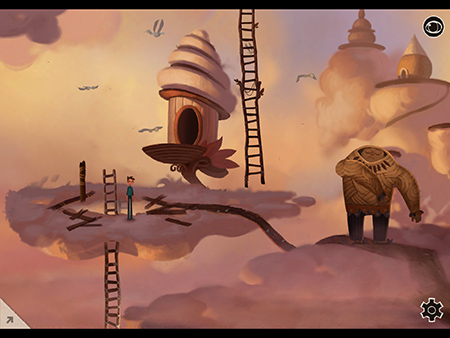 Okay. Go to the area between Meriloft and Curtis's house and try to climb up the ladder to Brother Lightbeard. Talk to F'ther about untying the knot and he'll just make it worse. We need a knot expert. A knotspert. 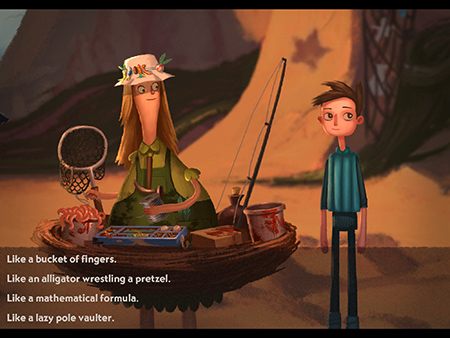 Go to Shellmound and talk to Car'l. Say she's good with knots and she'll tell you that she can draw a diagram about knots, but will need a pencil.

Go back to Alex and ask to borrow his pencil. Bring it back to Car'l and she'll draw you a diagram. Unfortunately, it's different for every player so this next bit will be a little tough. 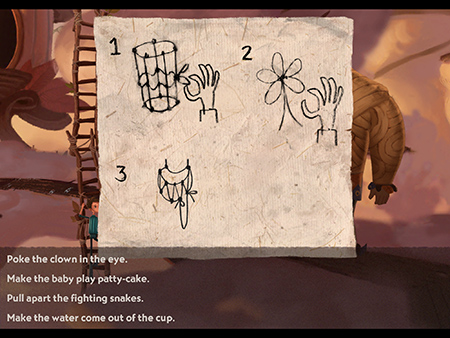 Go back up Father Lightbeard's ladder (oo-er) and talk to F'ther. Say "let's give that knot another try". You're going to need to say sentences that match up with the images on your knot diagram.

For more information on that, check out our dedicated knot guide. When you're done, you'll get the Hypergravity Thrusters. 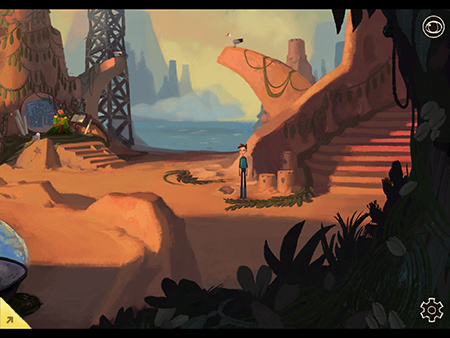 Pick up the dead Hexipal from the beach, at the bottom of the steps that lead up to Alex's spaceship. 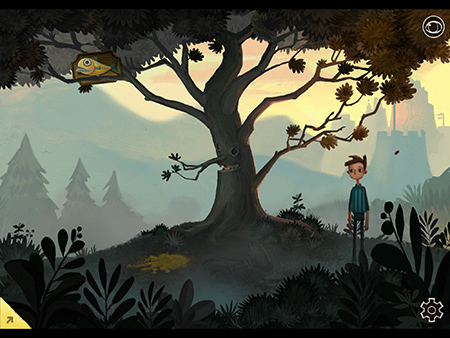 Go left and there will be a fish plaque in the tree's branches. This will only be there after you have the Hypergravity Thrusters (it falls out of Brother Lightbeard's cloud).

To get it down, we need to tell the tree a joke. It's got to be funny, but it can't be too offensive. One that we got to work was:

If you don't see the "smallest full-grown tree" option, keep trying jokes until you get to it. Pick up the fish. 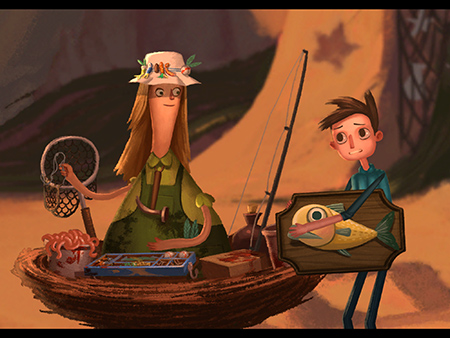 Show the fish to Car'l. Then give her the knitting hook and say "Please promise to leave some fish in the sea for future generations". You'll get some wire. 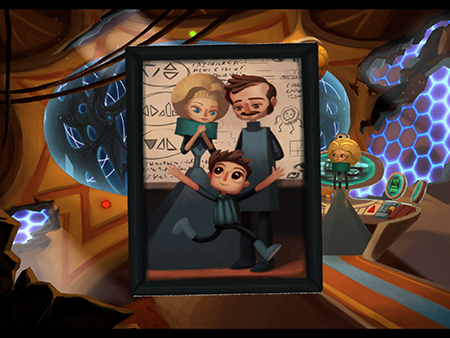 Okay, we're gonna need to play through Vella's story until we can get into Mom's control room. Inside, look at the family photo and take a note or a screenshot. We need the symbols on the back wall. 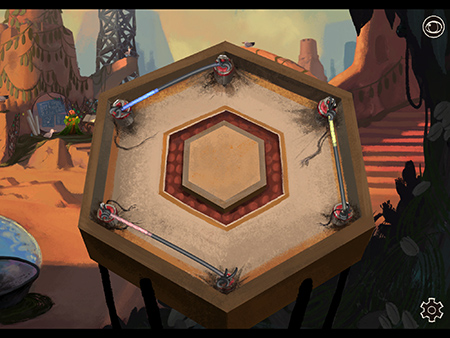 Use the wire on the Hexipal. Then, in this zoomed in screen, attach three lenghts of wire between any pairs of nodes. It doesn't really matter at this point. Now, go back to Alex's ship. 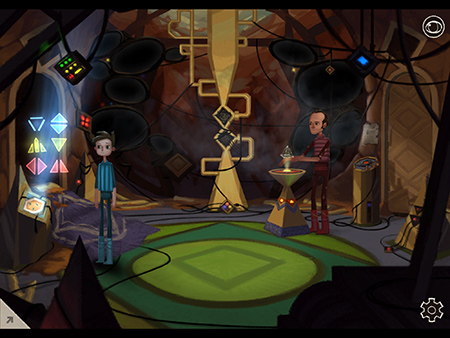 Put the Hexipal in the diamond slot to the left. A bunch of symbols will appear. They're probably wrong.

Now the goal is to lace the wire between pairs of nodes to make symbols that match those on the family photo from Vella's story.

So, to work it out, let's first take off all the wires. Then lace the (blue) wire from one node to another and see what happens. If the left symbol is wrong, take the Hexipal out and relace the blue wire between two different nodes. Keep doing this until the left symbol matches the top left symbol in Vella's picture.

Got that? Now repeat the process for the red and yellow wires until it all matches. The Hexipal will be charged. 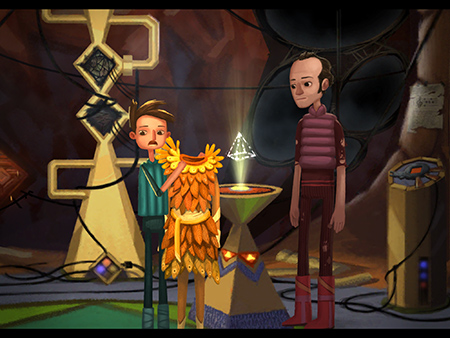 Give the radiation suit, the charged Hexipal, and the Hypercan to Alex. You're done with Shay's story! After a few cutscenes we'll be onto the final section…

How to solve the knot puzzle in Broken Age